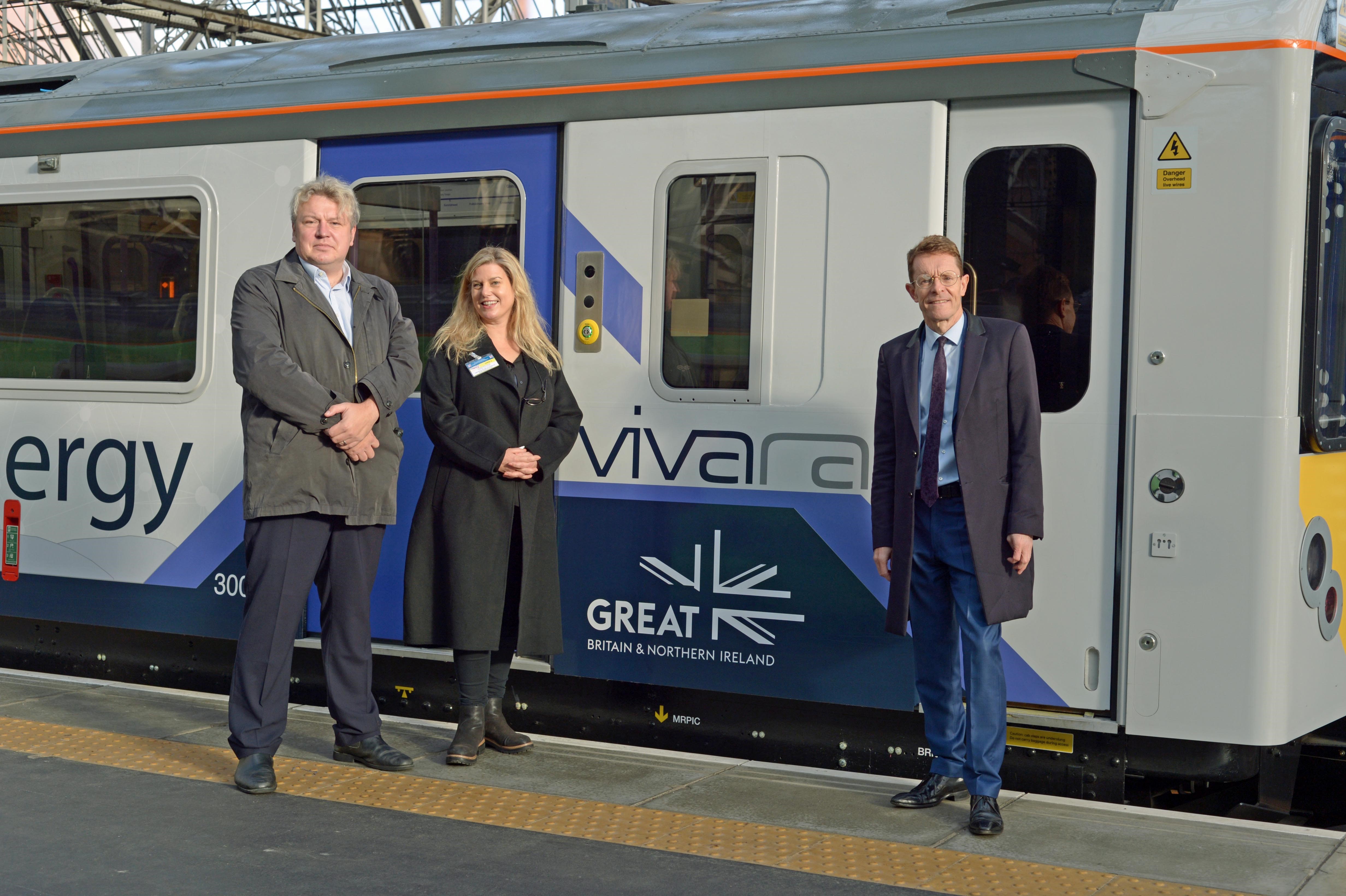 The strength of West Midlands green innovation and engineering was showcased to Prime Minister Boris Johnston and the world at COP26 when the region took the UK’s new emissions-free trains to the international climate conference in Glasgow.

Vivarail’s next generation battery train – the only one of its kind in the UK – and the UK’s first hydrogen train were both developed in the region and were on show at Glasgow Central Station.

Among those keen to get a look was Prime Minister Boris Johnson who was introduced by Mayor of the West Midlands Andy Street to the teams behind the new technology.

The Vivarail train then carried a group of transport industry leaders and the Mayor around the local rail network to demonstrate the pioneering engineering work underway in the West Midlands in the ‘race to net zero’.

As the Home of the Green Industrial Revolution, the West Midlands has secured a strong presence at COP26 with several key speakers and exhibitors showing the innovative solutions being developed to help the West Midlands achieve its ambitious target of  becoming a net zero region by 2041 - nearly a decade ahead of the UK’s 2050 target.

“I am really excited to be up in Glasgow to showcase the very best of West Midlands innovation, as our region looks to play a leading role in tackling the climate emergency as the home of the Green Industrial Revolution. And I’m especially grateful to Vivarail for hosting us on their fantastic train today – a real testament to the ingenuity and entrepreneurship in the West Midlands that will help us tackle climate change.

“One of the key roles we can play globally is the de-carbonisation of transport, and it is brilliant that both the UK’s first battery-powered and hydrogen-fuelled trains are being developed right here in the West Midlands.”

Based in Southam, near Leamington Spa, Vivarail is the designer and manufacturer of the UK’s only battery-operated train which can provide almost unlimited emission-free travel on rail routes that don’t or cannot have overhead power lines. High performing batteries allow the train to travel 100km between charges and only take 10 minutes to be fully recharged.

Vivarail had launched its presence at COP26 with a ground-breaking run over the Forth Bridge – the first ever electric train to do so. Since then it has carried hundreds of guests from across the world and in the first week of COP26 celebrated its second US order, following its success earlier in the year with Pennsylvania.

"As a company we are firmly and proudly based in the West Midlands – and we sold our first fleet of trains to West Midlands Railway.

"As well as our manufacturing facility at Southam we also maintain our operational fleet at Bletchley, creating new jobs and skills in our region.

"Our presence at COP26 has given us the chance to share good news stories from our excellent suppliers as well as talk about our own work. As a company we try to source as much as we can within a 50-mile radius of our site, so we can support local businesses and minimise our carbon footprint as much as possible.

“We were delighted to welcome Andy Street to our train today and to give our firm support to the Home of the Green Industrial Revolution message.”

The first of its kind in the UK to be  powered by a hydrogen fuel cell, the zero emission train, which produces electrical power for traction, achieved its first successful mainline test run in September 2020 and work is underway to get it ready to operate as a commercial passenger train.

Alex Burrows, Director of Enterprise & Innovation at the Birmingham Centre for Railway Research and Education, said:

“Our railway group at the University is at the forefront of research and development into the application of hydrogen and battery technologies to the railway.

“Our partnerships between industry and academia are accelerating and de-risking the delivery of innovation in rail.

“The scale and pace of our work in delivering hydrogen train technology has been a real success story for the University and our partners across the West Midlands. And through the Rail Alliance we’re keen to work alongside Vivarail too - tackling climate change and reaching net zero will require a range of different technologies, and at the University we’re at the cutting-edge of those innovations.

“Not only have we won several awards for this work, but we’re also looking to further implement this technology through a new spin- out company based in Birmingham.”