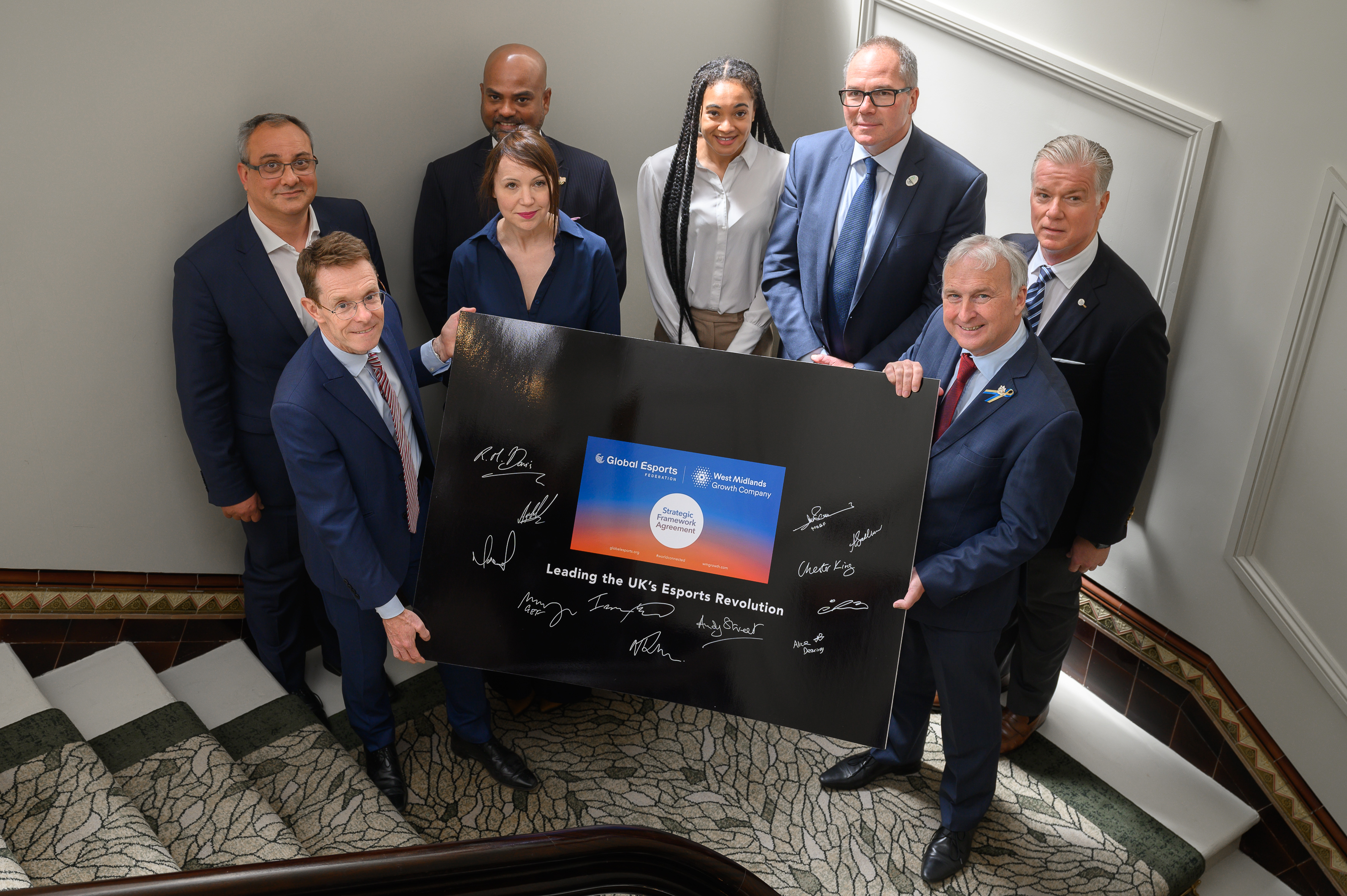 The West Midlands has agreed on a 10-year Strategic Framework Agreement (SFA) with the Global Esports Federation (GEF), accelerating the region’s commitment to driving international growth in the rapidly developing industry, and further burnishing the UK’s credentials as an international esports centre. The partnership will see the West Midlands join a network of global hubs, including GEF’s headquarters Singapore and continued developments in Brazil, China, Türkiye, Japan, the Middle East, Africa, and the Americas, among others.

The agreement spanning 10 years – led by the West Midlands Growth Company (WMGC)* – will cement the region’s position as a hotbed for the esports and gaming industry, with the West Midlands already responsible for one quarter of the UK’s output in the sector.

The global gaming market was valued at US$198.40bn in 2021 and it is expected to reach US$339.95bn by 2027[1]. In the UK, the market reached a value of £7.16bn in 2021, representing approximately 3.5% of the global market[2]. The sector, therefore, presents a significant economic opportunity for the UK, which this partnership will capitalise on by focusing on three key areas – employment and skills, policy, and major events.

The Strategic Framework Agreement commits to progressing a number of key areas, including:

The announcement precedes the inaugural Commonwealth Esports Championships and the Commonwealth Esports Forum in partnership with the Commonwealth Games Federation which will take place in Birmingham this August. Together, this partnership and the Championships will turbocharge growth and prosperity in the UK esports industry, which is already the fastest growing tech sector in the country. The Championships will be the foremost esports event since the Global Esports Games in Singapore in December 2021, which attracted over 500 million viewers from across the globe.

The partnership builds on the West Midlands’ position as a gaming and esports hub within the UK, with the region playing host to a total of 130 games companies – predominantly clustered around Leamington Spa – including the likes of Codemasters, Ubisoft, Playground, Sega Hardlight and others.

The sector employs a workforce of more than 3,000 games professionals in the region. The University of Warwick has also been recently named the UK Esports University of the Year for the fourth successive year, following significant investment in state-of-the-art facilities and talent.
Premier League club Wolverhampton Wanderers has also committed heavily to Esports, hosting its own esports organisation with teams in the UK, Europe and China, as well as announcing last year a partnership with North American Esports giant Evil Geniuses.

“The GEF President, Chris Chan and the entire Board of the Global Esports Federation have earmarked strategic global hubs as anchors for our development of esports, sports, immersive technologies, innovative entertainment, and adjacent sectors. The leadership in the West Midlands continues to demonstrate a strong collective ambition and the diverse capabilities of this dynamic region. Through our partnership with the Commonwealth Games Federation for the upcoming Commonwealth Esports Championships and this historic Strategic Framework Agreement, we are proud to bring our support, expertise, and strong, tangible commitment to this region, unlocking a decade of limitless opportunities and accelerating growth for the people and businesses who are lucky to call it home.”

“I was thrilled when we confirmed that the first ever Commonwealth Esports Championships would be staged this summer right here in the West Midlands and this exciting partnership with the Global Esports Federation showcases the scale of our region’s ambition - to be a global leader in what is the world’s fastest growing entertainment sector. We’re fortunate to already have huge gaming names like Sega Hardlight and Codemasters on our doorstep all contributing to the West Midlands’ growing status as an esports hub. Now we’re taking the next step by partnering with the Global Esports Federation to drive investment and create high-quality, state-of-the-art jobs in this incredibly dynamic sector. These are momentous times for the West Midlands, and I cannot wait to see this sector continue to thrive.”

“With Birmingham and the wider West Midlands synonymous with youth, vibrancy and pioneering new innovations, our region is well-placed as the new strategic centre of UK esports. Through our partnership with the Global Esports Federation, we’re turning this rapidly growing, global economic and cultural opportunity into a regional blueprint for growth. The 10-year commitment will help us to deliver more major events in the city – driving international footfall into the region – and includes the development of a new Esports Innovation and Research Centre, which has the potential to galvanise local tech capability. We look forward to bringing esports to new audiences of fans and talent, right here in Birmingham, starting with the inaugural Commonwealth Esports Championships this August.”

The partnership objectives will also build on the region’s successful track record in hosting major international sporting events and capitalise on the exposure presented by the Birmingham 2022 Commonwealth Games. Other recent events have included the IAAF World Athletics Championships, World Gymnastics Championships, the Cricket World Cup, The Ashes Series, and the All England Badminton Championships.

A recent report from WMGC highlights that the West Midlands MICE (Meetings, Incentives, Conferences and Exhibitions) sector was worth £2.3bn to the region in 2019, with the industry supporting 65,000 jobs.