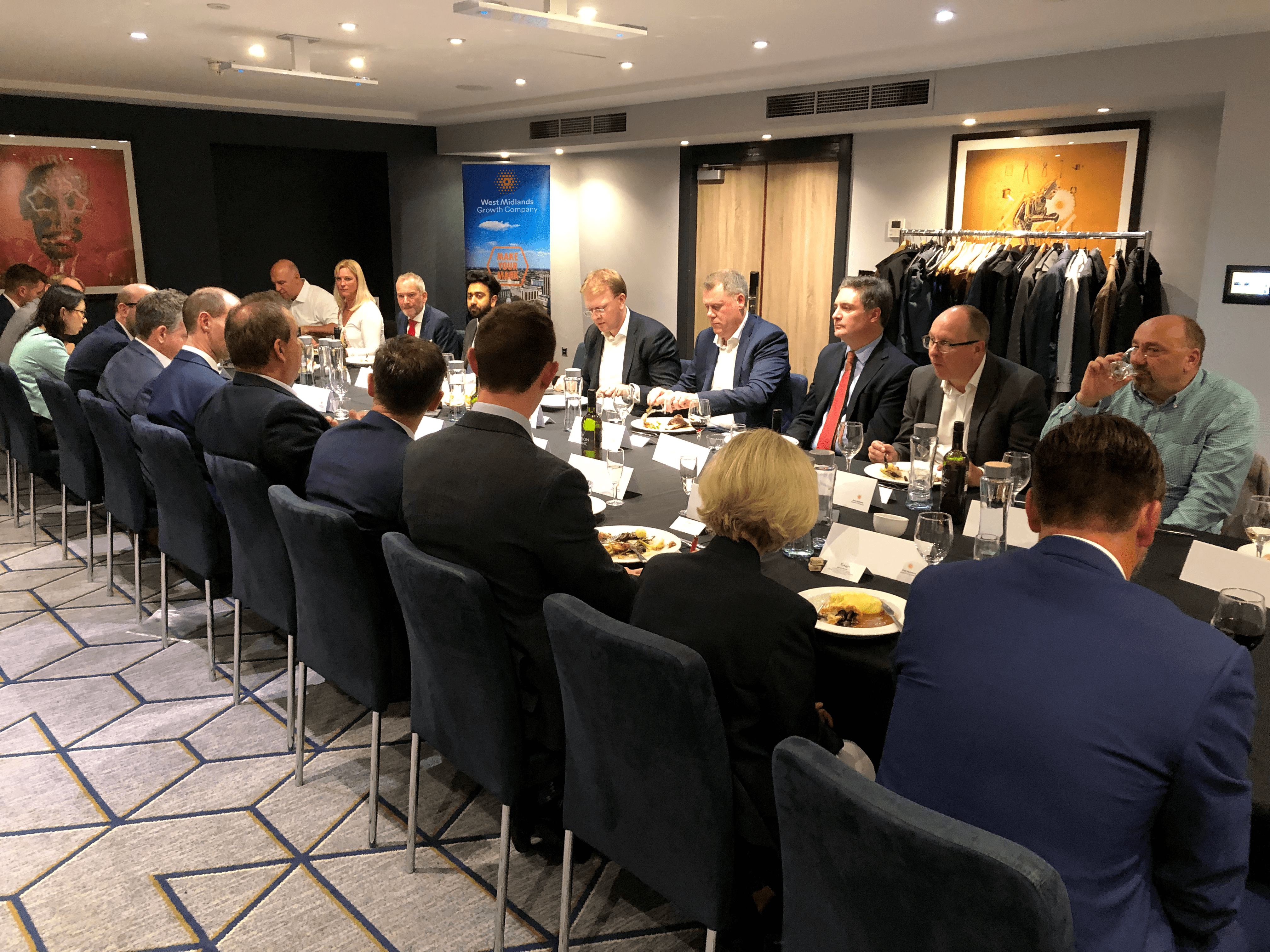 Rail experts from across the West Midlands came together at the West Midlands Growth Company’s latest sector dinner to discuss the region’s prominent role in developing the rail industry for future generations. Adam Titchen, Business Development Manager, conducts us through the key topics of conversation.

“Tell people you work in rail, and they’ll think you’re a conductor, or a train driver, or a signal operator.”

“Most people’s opinions of railways are based on one or two experiences of delayed trains, missed connections, or ticket price increases.”

These comments reflected the sentiment of numerous guests at our rail-focused sector dinner, held at Malmaison hotel in Birmingham on Wednesday 23 October. They also explain why the sector has an image problem in recruiting talent.

Rail has for some time been a less-sexy cousin of the automotive industry when it comes to attracting skills and labour. But, as Dr Xueyu Geng from the University of Warwick explained, HS2 could be a once in a generation opportunity to inject some glamour to the rail profession and, crucially, help to attract and retain skilled people.
The West Midlands is perhaps the best-placed region outside of London to create a beneficial and unifying strategy for the growth and future of UK rail. The opportunities arising from this are numerous.

In rail electrification, for instance, we could break the mould of stop-start investment cycles, and create a more sustainable demand for Overhead Line Electrification (OLE) work. After all, if OLE engineers are simply not required for a five-year period, it is much harder to find capable people when the skills are once again called for.
The regional government’s strategic view is also helpful in ensuring skills provision and training is available. The West Midlands Combined Authority has invested millions of pounds into Gateway funding and delivers 50% subsidised training through companies like Auctus Management Group, who have had notable success in bringing armed forces veterans into the rail workforce.

Meanwhile, Birmingham’s Clean Air Zone promises an opportunity to lure commuters away from their cars and onto the railway. This won’t be without its difficulties: if the Clean Air Zone is extended to trains, this will necessitate a mammoth shift to electrified passenger and freight trains (the UK’s freight rolling stock is still some way behind that of Germany in terms of its electrification). German-owned DB Cargo and American railroad giant Genesee & Wyoming attest to the challenge this poses, but there are surely opportunities for the brave.

A key theme emerging from the dinner was that the freight element of rail should not be underestimated. There have been huge recent investments in rail freight infrastructure, like DB Cargo’s £7m steel logistics centre in Wolverhampton.

Genesee & Wyoming has also made significant investments into Pentalver in Cannock and Four Ashes, and into Freightliner at Landor Street in Birmingham. And as well as bolstering its on-the-ground operations, the firm has increased its presence in the region by setting up its new UK shared services centre at the heart of the city, in recognition of Birmingham’s strategic location at the heart of the rail network, coupled with the depth and quality of professional skills in the region.

Guests agreed that companies in the sector had to work together to get freight off roads and onto rails, rather than fighting amongst themselves for contracts. The rise of same-day delivery could, with the appropriate collaboration, become an opportunity for rail.  Indeed, collaboration was highlighted by Siemens Rail Automation as one of the region’s key potential strengths.

As the evening progressed, conversation began to conclude with a focus on higher-level aspirations. Guests noted that while rail is a very safety-conscious industry, there is still plenty of room for efficiency improvements to come from autonomous driving technology. Achieving a digitally connected railway is a key part of the rail strategy in the West Midlands, and the region’s new 5G testbeds will act as a catalyst for delivery.  It is perhaps even easier to deliver this in rail than in automotive, where city driving is fraught with unexpected hazards and risks on a scale simply not seen in rail.

Arising from the discussion was a clear appetite to develop the conversation in the months and years ahead. My colleagues at the West Midlands Growth Company and I will continue to facilitate this industry collaboration and invite stakeholders to share ideas that will benefit the region and shape our inward investment strategy moving forward.

If you would like to know more about our sector specific dinners or would like to discuss doing business as part of the region’s rail sector, contact us at invest@wmgrowth.com