VisitEngland announces Awards for Excellence 2022 to be held in Birmingham 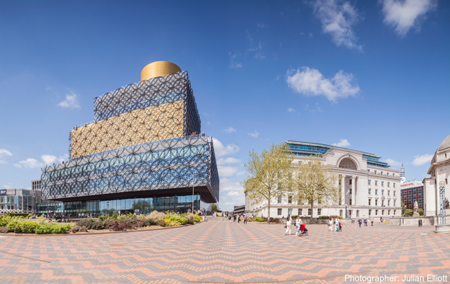 VisitEngland has today announced that this year’s VisitEngland Awards for Excellence will be held at the Library of Birmingham on 8 June.

“We’re delighted the West Midlands will host the VisitEngland Awards for Excellence. With the Birmingham 2022 Commonwealth Games representing the jewel in the crown of a sensational year of arts, culture and sport in the West Midlands, there isn’t a better suited location to celebrate the positive impact of tourism on the economy and within local communities. The awards are a timely recognition of the diligence and resilience of the sector across England following an extremely difficult period and we look forward to welcoming all the finalists to the Library of Birmingham in June.”

“We are delighted to be bringing VisitEngland’s Awards for Excellence to the Library of Birmingham this year and to be meeting in person again as our sector comes together to celebrate the finest in English tourism.

“The awards present a timely opportunity to raise the profile of England’s outstanding tourism products, showcase the industry’s innovation as well as acknowledge the people and businesses that work so hard to deliver world-class tourism experiences.

“Millions of jobs and local economies depend on tourism and the awards also recognise the determination and dedication of businesses and destinations across England’s tourism industry as they rebuild and continue to champion best practice and customer service excellence.”

There were more than 300 entries to the VisitEngland Awards for Excellence 2022 comprising of local winners from the 14 aligned competitions which have been running across England, who are then automatically entered into the national awards.

In addition to the 15 core categories, which include two new awards this year - the ‘Unsung Hero Award’ and the ‘Resilience and Innovation Award,’ special awards are also being presented including an ‘Outstanding Contribution to Tourism Award’, a ‘Travel Content Award’ and a ‘Tourism Superstar’ award.

The three national finalists for each category will be announced following a rigorous judging process by hand-picked tourism industry experts.

In recognition of running a high quality, fair and transparent awards programme, VisitEngland is also delighted to announce that the Awards for Excellence have been accredited with the Awards Trust Mark for the first time. The Awards Trust Mark scheme, run by The Independent Awards Standards Council, enhances trust between those entering awards schemes, and the organisations running them.

“The tourism industry has been particularly hard hit by the pandemic. It is therefore all the more important that excellence and best practice in the face of these challenges gets the recognition it deserves. We are very pleased to announce that the VisitEngland Awards for Excellence have achieved Trust Mark accreditation in recognition of the high standards of ethics and transparency that they adhere to with this excellent awards scheme - congratulations!”

The Self Catering Accommodation of the Year category, in 2022 will be sponsored by Sykes Holiday Cottages.

Tourism is one of England’s largest and most valuable industries, supporting hundreds of thousands of businesses, employing about 2.6 million people and, in 2019, generating £76 billion in domestic visitor spending.