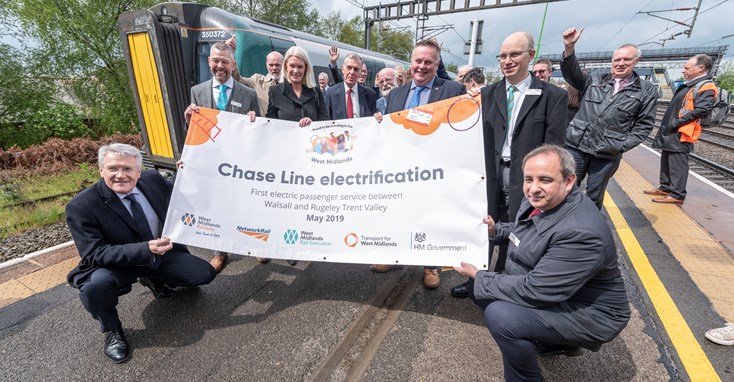 There will be significant improvements to train services between Walsall and Rugeley this May, as electric trains start operating to the Chase Line.

The first electric train carrying passengers travelled on the line on Friday 10 May, ahead of major timetable improvements to be introduced later this month. Following this inaugural passenger service, a special plaque was unveiled at Walsall railway station by Rail Minister, Andrew Jones, and partners in the electrification of the line.

Four carriage Class 350 electric trains will start operating in the main timetable on the line from Monday 20 May. These trains will have more seats, as well as being quieter and more environmentally friendly than the current diesel trains on the route. From Walsall, there will be an hourly cross-Birmingham service to Coventry and London Euston, with half hourly services to Birmingham Airport (Monday to Saturday).

The £110m Network Rail electrification project began in 2012 as part of Britain’s Railway Upgrade Plan, with overhead electric lines being installed along 51km of railway line and the complete reconstruction of six road bridges along the route.

The diesel trains that currently operate on the route will be used to supply the carriages for new additional services between Birmingham, Wolverhampton and Shrewsbury, as well as to strengthen existing routes across the West Midlands.

The Chase Line is a well-used and popular route, which will benefit from the significant uplift in capacity and new direct services that the completion of the electrification project will enable. In May 2018, the frequency of services was doubled to every half an hour, and demand has continued to grow along the line.

“Electrification of the Chase Line means that we will be able to improve services to passengers across the West Midlands.Local passengers will benefit from more seats and new direct services to London and Birmingham Airport. Passengers further afield will benefit from the additional carriages that this change will bring about. In many ways, this project is the key that unlocks many of the timetable improvements being introduced this Spring.”

“This significant investment is right at the heart of our aim to put passengers first by improving train travel as part of Britain’s Railway Upgrade Plan. Electrifying the line between Rugeley and Birmingham via Walsall will not only provide a better more reliable railway for people in the Midlands, but it also unlocks routes across the wider rail network.”

“The Chase Line has a rich history and the arrival of electric trains completes an extraordinary programme of work, starting with re-opening in 1989, to modernise services for passengers on the line.

“Replacing diesel trains and making improvements to the track will deliver faster journeys for passengers, new services and more seats on West Midlands Railway and provide a real boost for both communities and businesses along the route.

“We are committed to electrification where it delivers benefits for passengers and value for money, and are also focused on taking advantage of new technology, including bi-mode, hydrogen and battery technology trains.”

“I am delighted we are seeing a revolution in transport across the region thanks to our unprecedented investment in rail, Metro, bus and cycling, which is crucial to building a healthier, happier and better connected West Midlands.”

“The electrification has been long awaited and will be great for people in Staffordshire. Not only does it mean quieter and cleaner trains on the Chase Line, but more direct services to Birmingham International and London.

“This is just part of the investment in the region which will transform the rail network and services over the next few years improving connections and underpinning jobs and growth.”

The new West Midlands Railway and London Northwestern Railway timetable will operate from Sunday 19 May. There will be changes to the time and formation of some services, so passengers are advised to check their train times and to plan ahead for the changes. The new timetable is now live on journey planning systems and more information can be found at www.westmidlandsrailway.co.uk