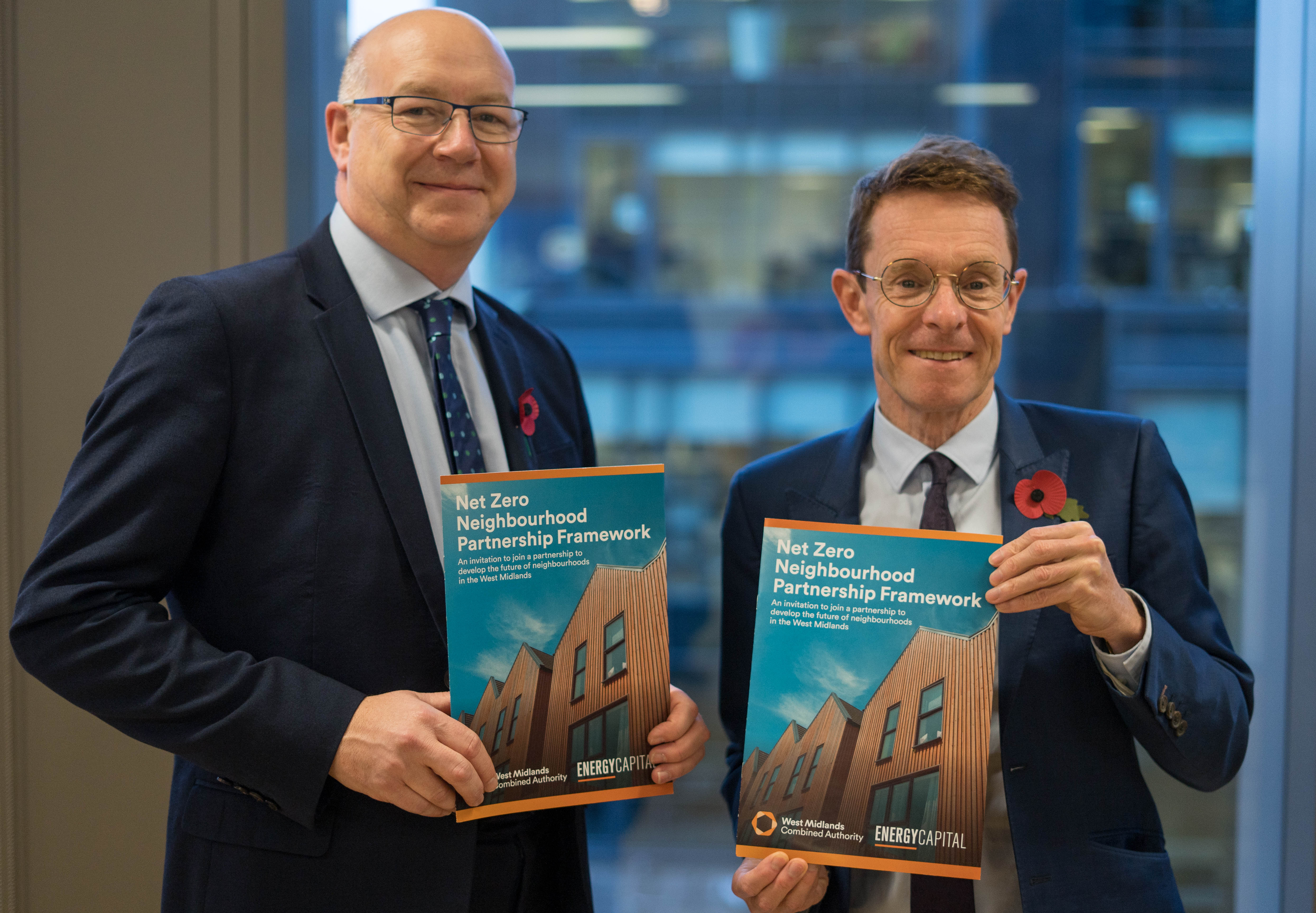 A pioneering West Midlands project to create the low carbon neighbourhoods of the future was launched on Thursday November 11 during the COP26 climate conference in Glasgow.

Andy Street, Mayor of the West Midlands, announced a region-wide programme to build a series of ‘Net Zero Neighbourhoods’, where homes are retrofitted with insulation and green heating on a street-by-street basis alongside other low carbon infrastructure such as on-street electric vehicle charging points.

The pilot programme, a UK first, will help tackle climate change, reduce fuel poverty and support the region’s ambition to be net zero by 2041.

The WMCA is investing more than £2m into the Net Zero Neighbourhood demonstrators, with a goal to secure a major private sector partner for each pilot neighbourhood across the region.

Arup is the first partner to join the scheme, with a commitment to work on a Net Zero Neighbourhood with City of Wolverhampton Council. Government funding is also expected to support the programme.

The Net Zero Neighbourhood (NZN) pilot has been set up by the West Midlands Combined Authority (WMCA) and Energy Capital in response to research showing that for the region to meet its net zero 2041 target it needs to retrofit more than 294,000 homes by 2026.

The Mayor, who is spending two days at COP26 and was speaking today (Thursday Nov 11) in the United Nations blue zone, met with Jerome Frost from Arup at the company's Glasgow offices to discuss the Wolverhampton partnership.

“Retrofitting old and poorly insulated homes is absolutely critical to tackling the climate emergency here in the West Midlands, but that work alone does not go far enough to reduce emissions – nor does it properly regenerate our communities to become clean and green.

“That is why we have launched this pioneering Net Zero Neighbourhoods approach, where a host of other green living improvements can be made to a local area alongside the retrofitting. From LED street lighting to pocket parks, community farming initiatives to electric vehicle-charging, all these measures will help regenerate our region’s neighbourhoods whilst reducing carbon emissions.

“Crucially, we’re bringing our first major private sector partner along with us. Working alongside Arup, we can fight climate change whilst also creating those well paid, higher value jobs of the future, supporting other West Midlands companies developing the low carbon technologies and products needed for this work.”

The Net Zero Neighbourhood pilot follows studies which found that to date, deep retrofit initiatives have not generated change at a scale or pace necessary to achieve the region’s net zero goals. Most initiatives have only encouraged individual households to take up deep retrofit measures and cleaner heating technologies, not whole streets.

Net Zero Neighbourhoods will also look at ways to make it easier for residents to travel in an eco-friendly way with electric bus services, electric vehicle street charging, car clubs and better walking and cycling routes.

“We know that 80% of the global building stock in 2050 has already been built.

“That’s why projects that retrofit at scale will decarbonise cities to deliver sustainable futures, whilst also creating local jobs and neighbourhoods for communities to be proud of.

“We’re pleased to be supporting this pilot scheme which builds upon our city’s growing reputation as a centre for sustainable construction and as a climate change champion.

“This pilot will be backed by a council committed to be net-carbon neutral by 2028 – one of the most challenging targets in the region - and the first English city to sign the European Circular Cities Declaration.

“We are also home to over 2,000 small and medium sized enterprises in the green energy, retrofit and green construction sectors and today’s welcome announcement by the WMCA could bring much-needed jobs and opportunities to these businesses.”

In addition to the Net Zero Neighbourhood partnership in Wolverhampton the WMCA is working with the region’s other metropolitan councils to identify future locations and work up details on how such a scheme might work in each neighbourhood.