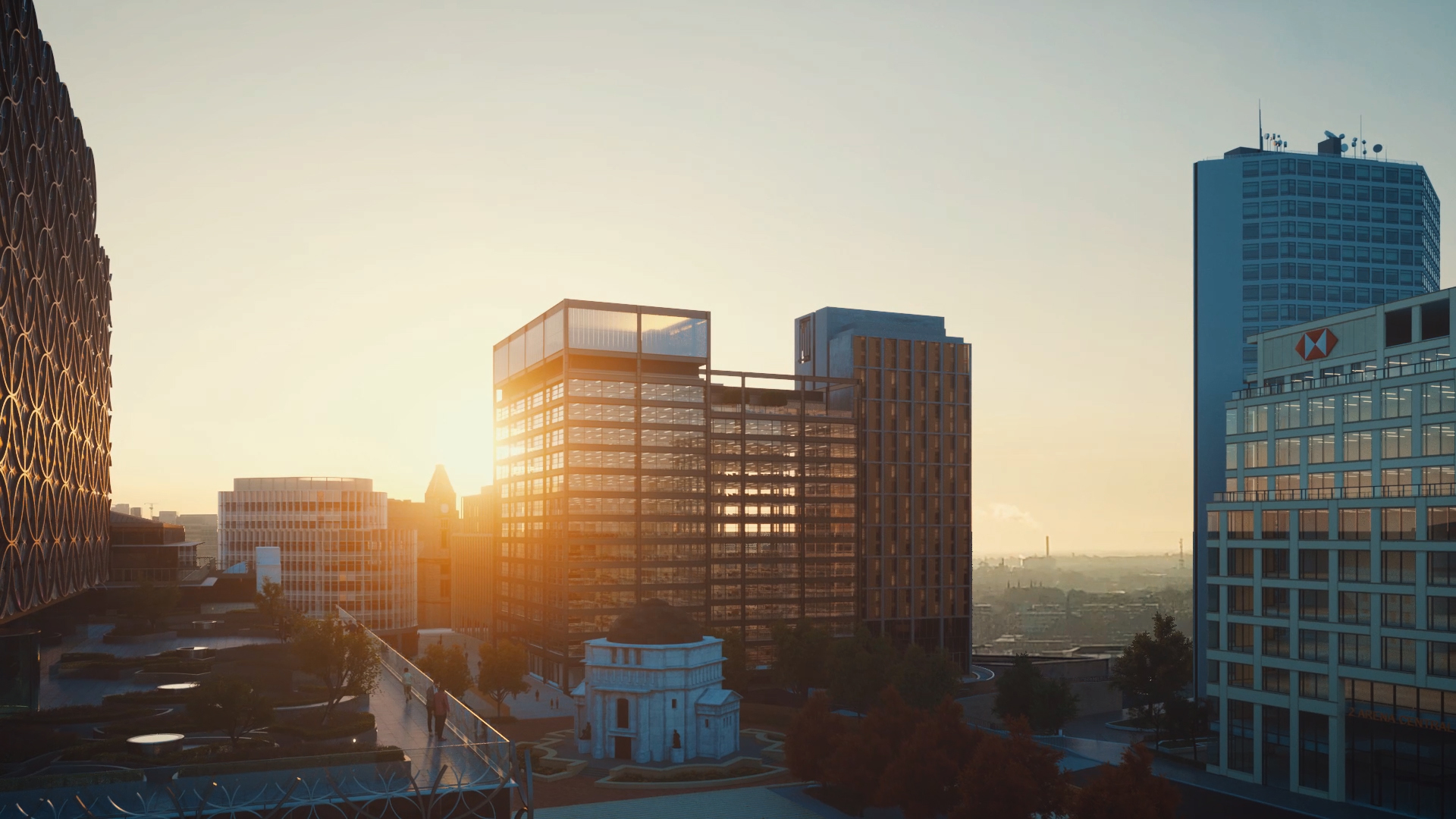 Construction work has started on One Centenary Way, the latest building at Paradise, Birmingham, and the first part of Phase Two of the development.

The announcement follows extensive site clearance and enabling works which have already taken place to allow construction of the new 280,000 sq ft, thirteen-storey building to begin.

One Centenary Way will overlook the transformed Centenary Square which, with its unique, exposed steel frame, will provide a striking visual gateway to Paradise and a new landmark for the city.

Designed by Birmingham-based Glenn Howells Architects, One Centenary Way incorporates three-metre wide horizontal windows, encased within an exposed structural steel façade. The innovative, structural-led design is a response to the complex site location above the A38 Queensway tunnels which will remain open throughout the construction process. The building will offer large office floorplates of up to 22,500 sq ft as well as retail space at ground floor level.

One Centenary Way follows on from the first phase of Paradise which includes One Chamberlain Square and Two Chamberlain Square. These buildings, along with newly enhanced public realm, will complete this winter.

One Chamberlain Square is fully let to international professional services giant PwC which will be moving more than 2,000 staff to the building in the new year. Dishoom, the Indian restaurant that pays loving homage to the Irani cafés and food of Bombay, will be gracing part of the ground floor space of the building.

At Two Chamberlain Square, international law firm DLA Piper has taken the top two floors of office space while award-winning wine bar and restaurant Vinoteca will be launching outside London for the very first time on the ground floor.

“The challenges of building above the A38 Queensway tunnels mean we needed a contractor with the right civil engineering expertise to get this stage of work moving. We are keen to now maintain momentum and move ahead with the second phase of Paradise.”

Birmingham City Council granted planning permission for the building in March 2018. Contractor Sir Robert McAlpine, one of the country’s leading building and civil engineering companies, has a long tradition of working on major construction and engineering projects both in Birmingham and nationwide.

“Central to how we operate is to work very closely with developers and Paradise is no different. We are proud to be appointed to work on this major project in the centre of Birmingham that will create a real landmark for the city as part of one of the largest mixed-use developments in the UK. Our long history of major construction projects in the city includes the Bullring and more recently, Exchange Square.”

One Centenary Way is the first building to be developed in the second phase of Paradise. Phase Two includes a new 250-bedroom, 22 storey four star hotel, earmarked for completion in 2023. A further office building, Three Chamberlain Square, will complete Phase Two along with further public realm that includes a new space, Ratcliff Square, between these buildings.

“As we move into the second phase of development at Paradise it’s crucial to have the right partners on board who share our vision and enthusiasm. One Centenary Way will take Paradise and Birmingham forward with a distinctive, structural-led design that befits its location and creates a new landmark for the city.”

As well as straddling the A38 tunnel, another key feature of the building will be its permeability onto Centenary Way and Ratcliff Square. Centenary Way is the pedestrian boulevard linking Victoria, Chamberlain and Centenary Squares through the very heart of Paradise and is the main east-west pedestrian route through Birmingham city centre.

At up to 2 million square feet, Paradise will deliver up to ten new flagship buildings, offering offices, shops, bars, cafés, restaurants and a four star hotel across 17 acres. The Paradise redevelopment is being brought forward through Paradise Circus Limited Partnership (PCLP), a private-public joint venture with Birmingham City Council. The private sector funding for Phase One and Two is being managed by Hermes Investment Management, with Argent as the development manager.

Paradise sits within the country’s largest city centre Enterprise Zone and has benefited from investment by the Greater Birmingham and Solihull Local Enterprise Partnership (GBSLEP) in enabling and infrastructure works.

A website showcasing the vision for Paradise, in addition to a live time-lapse camera, can be viewed at www.paradisebirmingham.co.uk.