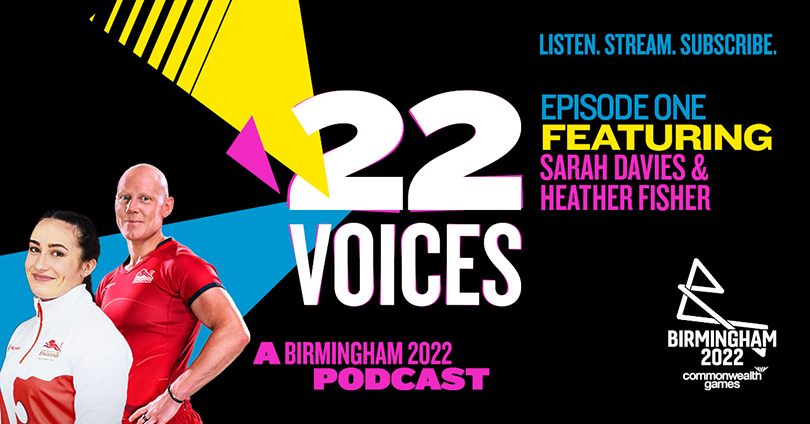 Rugby player Heather Fisher has described being kicked out of toilets because people think she’s male, in a new podcast series called 22 Voices, launched today by the Birmingham 2022 Commonwealth Games.

The first episode of 22 Voices marks International Women’s Day; this year’s theme is #ChooseToChallenge. In the episode, rugby sevens star Heather Fisher and weightlifter Sarah Davies, who also competes in beauty pageants, open up about how they have challenged the gender stereotypes they’ve faced throughout their lives.

Heather Fisher, who has alopecia, describes being kicked out of ladies’ toilets by people who assume she’s male:

“You get asked questions like, ‘do women tackle? Do you do what the boys do?’ Are you serious? We play the sport, of course we tackle. It’s amazing how gender still plays a massive part in it.”

Weightlifter Sarah Davies won a silver medal at the 2018 Gold Coast Commonwealth Games, and is also a beauty pageant winner. She talks frankly about the abuse she’s received and becoming a role model for young girls:

“I was bullied as a kid for being muscular. I’m now more muscular than I’ve ever been and I’m successful at what I do because of that, and I can get on stage and be in a room full of women and be equally as feminine. If I can put myself out there and be the role model I didn’t have at the age of 11, that’s who I want to be.”

Davies, winner of the Miss Leeds and Miss Intercontinental England beauty pageants, also describes the moment she was almost banned from part of a competition in the Philippines because of her muscular physique:

“They tried to stop me walking in the swimsuit part of the competition because of how I looked. They picked a fight with the wrong woman that day!

“There had been some trolling online from some Filipino pageant fans who were like, ‘she’s manly, she shouldn’t be here, she’s a bodybuilder, is she trans?’ It caught me off guard and upset me a little bit because at 26 years old, how am I still being bullied?”

To listen to the full episode of 22 Voices featuring Heather Fisher and Sarah Davies, and to subscribe to the podcast, head to www.birmingham2022.com/22voices