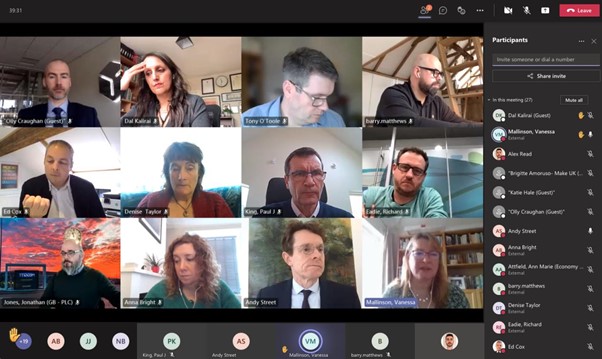 The Mayor of the West Midlands, Andy Street has today hosted a roundtable with local companies to discuss the role of businesses in helping the region achieve its net zero ambitions.

At the virtual event held today (17 March) a range of key businesses, which included Birmingham Airport, BT, DPD, Severn Trent and National Express, laid out their own plans to decarbonise their businesses and discussed how these aligned with the WMCA’s own net zero target of 2041.

Some examples discussed include DPD’s 2025 clean fleet target using zero or low-emission vehicles in 25 major towns and cities, Meggitt’s plant in Coventry which has one of the largest photo-voltaic systems in the UK and Birmingham Airport’s five year commitment towards a sustainable future.

The Mayor highlighted the critical role these businesses will play in leading a green jobs revolution, with the region predicting over 90,000 new jobs to be created by the journey to 2041.

At the roundtable the Mayor also launched the new West Midlands Net Zero Business Pledge. It encourages companies and other organisations commit to reducing their carbon emissions, whilst providing them with practical support and guidance on how to achieve those targets. Sustainability West Midlands, BT and MakeUK are among those who have already signed up as founder organisations.

“We have been clear from the outset that we simply cannot get to net zero without the participation of our region’s businesses. We’re going to need around £4.3bn of investment over the next five years to clean up our economy, and it’s not all going to come from the public sector.

“This is why I’m launching the Net Zero Business Pledge, to bring our businesses along with us on the journey to 2041. Our #WM2041 plan presents a huge commercial opportunity for local businesses in areas such as retrofit, clean transport, forestry and carbon capture, all of which will create tens of thousands of jobs here in the region. This is an exciting moment for the West Midlands and I am determined we seize this opportunity to become a leader in green enterprise.”

“BT has led the way on climate action for over 28 years and we’ve pledged to become a net zero business by 2045. As one of the largest employers in the region, we’re pleased to be supporting the WMCA’s new low carbon business pledge.

“We’re working with our customers, colleagues and suppliers to help them drive down their carbon emissions, and to truly build back better, Government, businesses and individuals must work together to put action on climate at the heart of their efforts to support a green recovery.”

The roundtable was also used to discuss how the West Midlands will be represented at the UN’s international climate change conference COP26 taking place in November. The event, which is being held in Glasgow, will give the West Midlands an opportunity to showcase its decarbonisation, energy and clean transport strengths as the home of the green industrial revolution.

“We’re proud to support the WMCA’s ambitious net zero business pledge, which builds on the environmental commitments we’ve already made. These plans include reaching net zero carbon emissions, using 100% renewable energy and having a fleet of vehicles that are entirely electric by 2030. We look forward to playing our part in this green recovery alongside other like-minded businesses across the region.”

Companies and other organisations making the pledge will commit to reducing their environmental impact, benefitting from reduced running costs and potentially securing funding to support them making the operational changes needed.  The Pledge will be managed in collaboration with Sustainability West Midlands and other regional partners, and organisations will gain access to support networks, guidance and best practice.

They will also benefit by being in a better position to prepare for climate change impacts such as increased energy costs and for their organisation to be a recognised leader in the net zero carbon economy.

“Businesses have the opportunity to support the West Midlands achieve our #2041 goal, and to make it known within their sector they are instrumental in helping us achieve this.

“Signing up to the pledge does require a commitment from businesses, but also provides many opportunities including ongoing support and cost savings. The pledge helps businesses position themselves in the forefront of the action against climate change, as well as giving the opportunity to showcase their efforts on the environmental front.

“The more businesses that sign up the faster we will be able to achieve our aim of creating a greener, heathier and fairer West Midlands.”