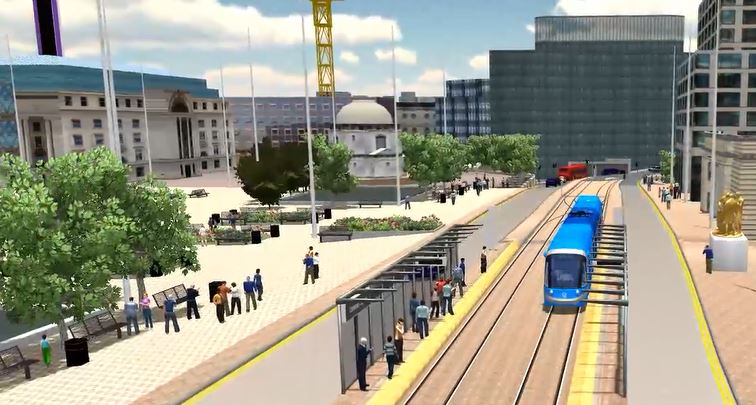 A computer generated fly-through shows how the West Midlands Metro will soon be taking passengers to Centenary Square.

It shows the blue tram passing a series of landmarks including Victoria Square, the Town Hall and the Library of Birmingham before it arrives at the new Centenary Square terminus.

The clip clearly demonstrates how the tram will merge with traffic at the remodelled Paradise Circus/Queensway/Paradise Street junction.

There are also no unsightly overhead wires on view as trams running on the Westside extension will be battery powered – a UK first.

The video clip is taken from a computer simulation used to train tram drivers.

The 840 metre extension is currently under construction and is due to open towards the end of next year.

A further 1.35 kilometre extension will take the tram to Hagley Road, Edgbaston and will be completed in 2021.

“These are exciting times for Birmingham city centre and the Westside tram extension will deliver passengers to the heart of the many new office developments at Paradise and Arena Central as well as the city’s famous visitor destinations.

“This brilliant video clip shows the people of the West Midlands how the extension will be a wonderful addition to the region’s transport network.”

Cllr Roger Lawrence, leader of City of Wolverhampton Council and WMCA portfolio holder for transport, said: “The Birmingham Westside extension is just part of the wider investment in the Midland Metro we have planned over the next few years.

“The Wolverhampton city centre extension is currently under construction and we are planning new lines between Wednesbury and Brierley Hill and between Birmingham city centre and Solihull.

“There is unprecedented investment in public transport in the West Midlands which will put hundreds of thousands of people within easy reach of major centres and support the economic growth of the region.”

The extension is being built by the Midland Metro Alliance.