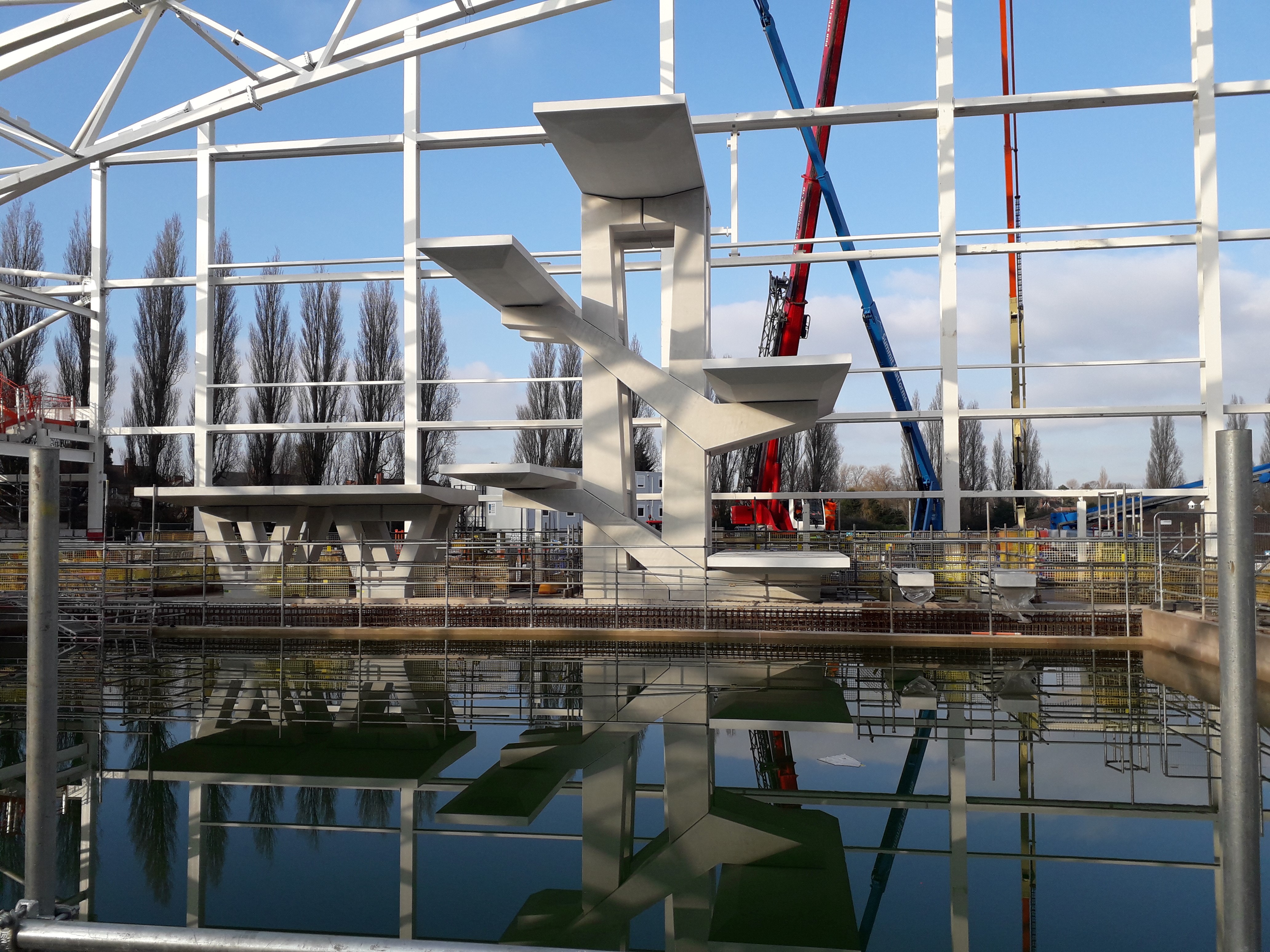 Another significant milestone has been reached at the Sandwell Aquatics Centre in Smethwick after the dive tower, which will be used for the diving competition at the Birmingham 2022 Commonwealth Games, was completed at the end of last month.

Team England has a great record of winning diving medals at the Commonwealth Games having previously bagged 75, including 31 golds, 22 silvers and 22 bronze medals.

One of the team’s most recent diving medallists is Noah Williams, who won silver in the men’s 10m synchronised platform competition on the Gold Coast in 2018.

Noah, who is also a European bronze medallist, recently saw photos and video footage of the completed dive tower and said:

“The dive tower looks so impressive, as does the whole Sandwell Aquatics Centre – it is going to be a fantastic facility to compete in and there will be lots of divers across the Commonwealth who will be really excited to see this phenomenal progress.

“Seeing the completed dive tower means that you can now start to visualise what it would be like to compete at Birmingham 2022 and I’m sure that come Games time the atmosphere inside that venue will be absolutely unreal, especially with a home crowd to support Team England.”

The Sandwell Aquatics Centre will host swimming and para swimming at the Commonwealth Games from 29 July to 3 August and the diving competition from 4 August to 8 August. With 66 medal events in total set to be held at the facility, it will be the stage for more medal moments than any other Birmingham 2022 venue.

As it is such a crucial facility for the Games, Birmingham 2022 Chief Executive, Ian Reid, has been carefully following progress over the last 18 months and said:

“This is another key milestone in the construction of the Sandwell Aquatics Centre, the only brand new venue for Birmingham 2022. The progress on this facility is clear for everyone to see and it is remarkable how much has been achieved in the space of 12 months.

“The dive tower looks incredible and I’m sure its completion will really help to focus the minds of those divers looking to compete at the Sandwell Aquatics Centre in 18 months’ time.”

The £73 million project is being funded by several partners. Sandwell Council is contributing £27 million, with £38.5 million coming from the overall Birmingham 2022 Commonwealth Games budget. A further £7.6 million is funded by other external partners Sport England, Black Country LEP, Sandwell Leisure Trust (SLT) and University of Wolverhampton.

"The Aquatics Centre is really taking shape and the new dive tower is another important milestone in this exciting build.

"The Centre will be a spectacular stage for our home nation swimmers and divers, and an important sporting legacy for the people of Sandwell."

The project is being overseen by Sandwell Council and the council’s Deputy Leader, Councillor Maria Crompton, said:

“We are thrilled to be marking yet another major milestone, the completion of the 10-metre dive tower, at the new Sandwell Aquatics Centre on Londonderry Lane in Smethwick. This is a testament to the hard work and dedication of our construction partners who have worked diligently throughout the Covid-19 pandemic to bring this amazing venue to life.

“The completion of the dive tower marks a pivotal moment for the aquatics centre and displays this world-class facility as the host venue for the swimming and diving events for the Birmingham 2022 Commonwealth Games.

“Reaching this milestone is testament to the strong relationships we have forged with all our partners since the beginning of this project which has enabled us to deliver this project on time and on budget.”

“The completion of the dive tower at the Sandwell Aquatics Centre is another exciting milestone as we progress towards Birmingham 2022.

“I believe this state-of-the-art facility will be one of the outstanding legacies of the Commonwealth Games.

“As we begin to look optimistically ahead to the Games, I have no doubt that the Sandwell Aquatics Centre will provide the perfect stage for the world’s top athletes to showcase the very best of Commonwealth Sport.”

Robyn Birch, is another Team England diver, who will be hoping to compete at the new centre. She said:

“The dive tower looks fantastic and its completion is a really important milestone for those divers looking to compete at Birmingham 2022.

“Seeing the photos and video footage of the new centre as it develops will help to inspire me during training over the next 18 months.

“Gold Coast 2018 was a fantastic experience, but it would be truly amazing to compete at a home Games.”

To get regular updates on venues, the sports programme and ticketing for the Birmingham 2022 Commonwealth Games, sign-up at www.birmingham2022.com