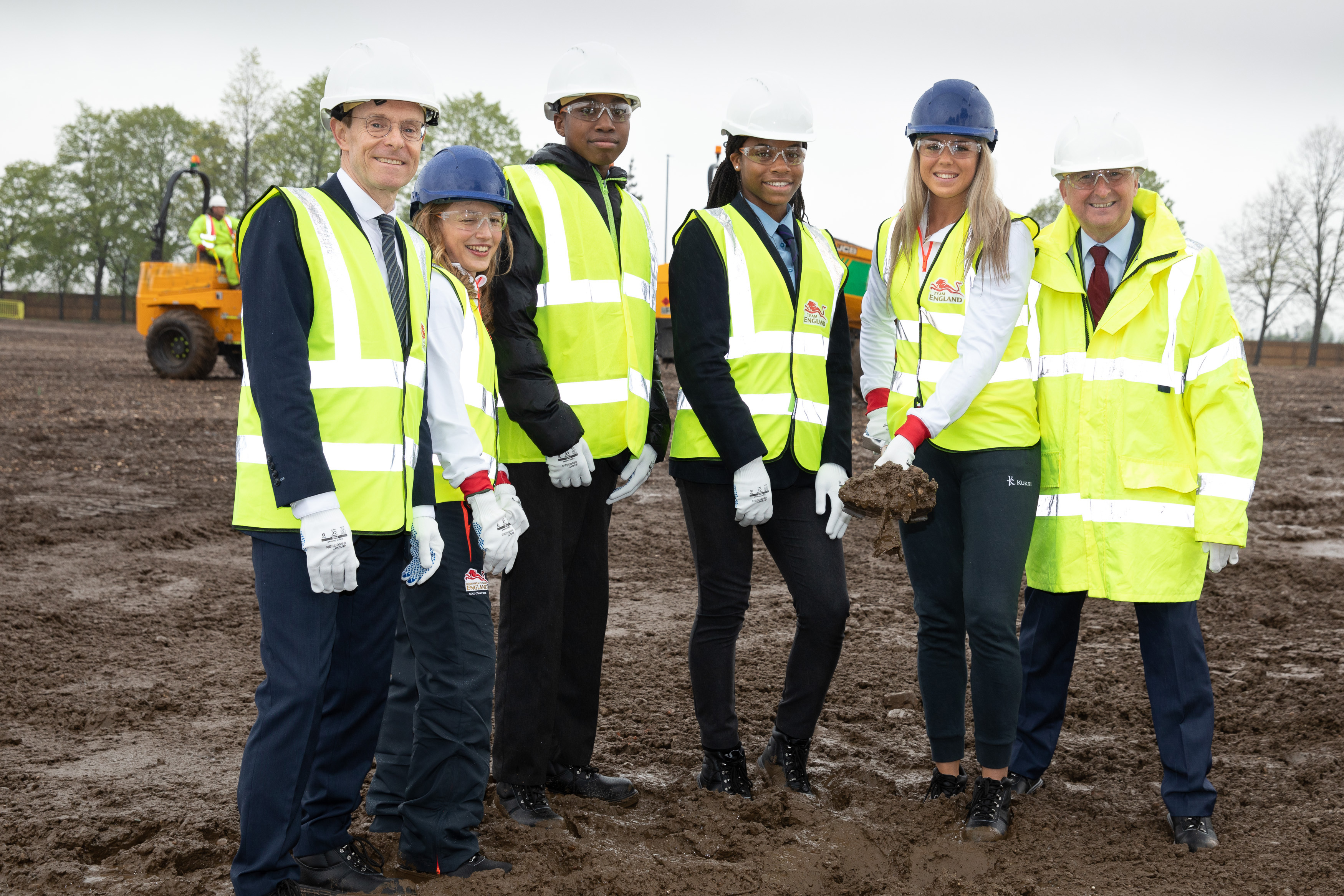 Construction work on the largest infrastructure project directly related to the Birmingham 2022 Commonwealth Games started on May 8th.

A ground-breaking ceremony was staged at the Commonwealth Games Village site in Perry Barr – which will provide a home away from home for around 6,500 athletes and officials coming to the city in the summer of 2022.

Members of the local community including pupils from Arena Academy were joined by dignitaries from the Games Partners – the organisations that have joined forces to deliver the 2022 Commonwealth Games – as well as Team England athletes to mark the occasion.

The construction work for this residential element of the village, built on the site of the former Birmingham City University campus, is due for completion in early 2022.

Commitments secured by the council through various mechanisms, including the Birmingham Business Charter for Social Responsibility, mean that the lead contractor on the residential element of the Commonwealth Games Village will provide:

Post-Games, the development will be converted into more than 1,400 homes for the people of Birmingham, the first phase of a long-term regeneration plan for Perry Barr and surrounding areas that will provide 5,000 homes – required as the city’s population is forecast to increase by 150,000 in the period covering 2011-2031.

As part of the wider regeneration of Perry Barr, the village will sit in legacy mode alongside improved open space, a redeveloped Alexander Stadium and related community, sport and leisure facilities as well as transport improvements including a new Sprint rapid bus service from Birmingham to Walsall. Upgrades to cycling and walking routes and a reconfiguration of the highways network along the A34 are also proposed.

And in order to engage with the Perry Barr community, the city council has today announced the launch of a programme of site visits for local schools and community organisations, full details of which will be announced in the months ahead.

“This is a once-in-a-generation opportunity to transform an area of Birmingham that has long needed investment, so I am hugely proud that the biggest sporting event in the city’s history will act as a catalyst for the development of a new high-quality residential neighbourhood.

“Perry Barr will provide a magnificent base for athletes in the summer of 2022 – and then go on to provide a genuine long-term Commonwealth Games legacy, by helping house the people of Birmingham in high-quality homes.

“This project is also offering a great boost to the local economy and the skills sector, opening up a whole host of career and training opportunities for those working on the site over the next few years.

“We are fully committed to working with local residents, businesses and those that travel in and around Perry Barr to keep them updated on all of the developments through a programme of engagement as we are mindful of the fact there is a huge amount of change set to take place in the coming years.

“But the way in which local, regional and central government have come together to make this plan a reality in such a short space of time, doing three years of work in just one, is a clear example of our collective determination to put on a great event and to regenerate and reposition our city.”

Planning permission was unanimously granted for the £520million scheme by Birmingham City Council’s Planning Committee back in December 2018.

In recognition of the importance of the scheme as a catalyst for the wider regeneration of Perry Barr, financial support towards the overall cost has been secured for the council-led scheme from central government (£165million) and the West Midlands Combined Authority (£20million).

“It’s fantastic to see the construction work starting at the athlete’s village, which will provide a home from home for 6,500 athletes and officials during the Commonwealth Games.

“When Team England compete in Birmingham in three years’ time, we know our athletes will have a great experience staying in the Athlete’s Village and will be given the support and opportunity to perform at their best in front of a home crowd. It’s very exciting to see the work that has been done so far on the village and the plans for the future with the legacy that the Commonwealth Games will bring.”

“Great progress is being made in Perry Barr. I am delighted that through £165million of government funding, this important project will not only play a vital role in the 2022 Commonwealth Games but also the long-term regeneration of the area.

“This is about more than just new buildings. The local community will also feel the benefits of improved transport links and have more opportunities to volunteer, develop new skills or find new jobs.

“I look forward to continuing to work with our local partners to make sure we make the most of the opportunities that the Games will bring.”

“I’m delighted to be here today as the first spade goes into the ground at what will be a superb home from home for the athletes and a fantastic legacy for the city – leaving more than 1,000 new homes for people here after the Games.

“The combined authority has been instrumental in securing government funding and we look forward to seeing the project come to fruition and people making the most of the opportunities for jobs and homes in the future.”

“The start of construction of the Athletes’ Village is a major milestone for us all and it’s going to be exciting to see this site develop over the next few years.

“We look forward to watching every step of the construction of what will be a crucial facility for the success of the Games. The Village will be home to the 6,500 athletes and officials from the 71 nations and territories that we will welcome to Birmingham in July 2022, so we’ll be working very closely with the other Games Partners to ensure that a world-class facility is created.”