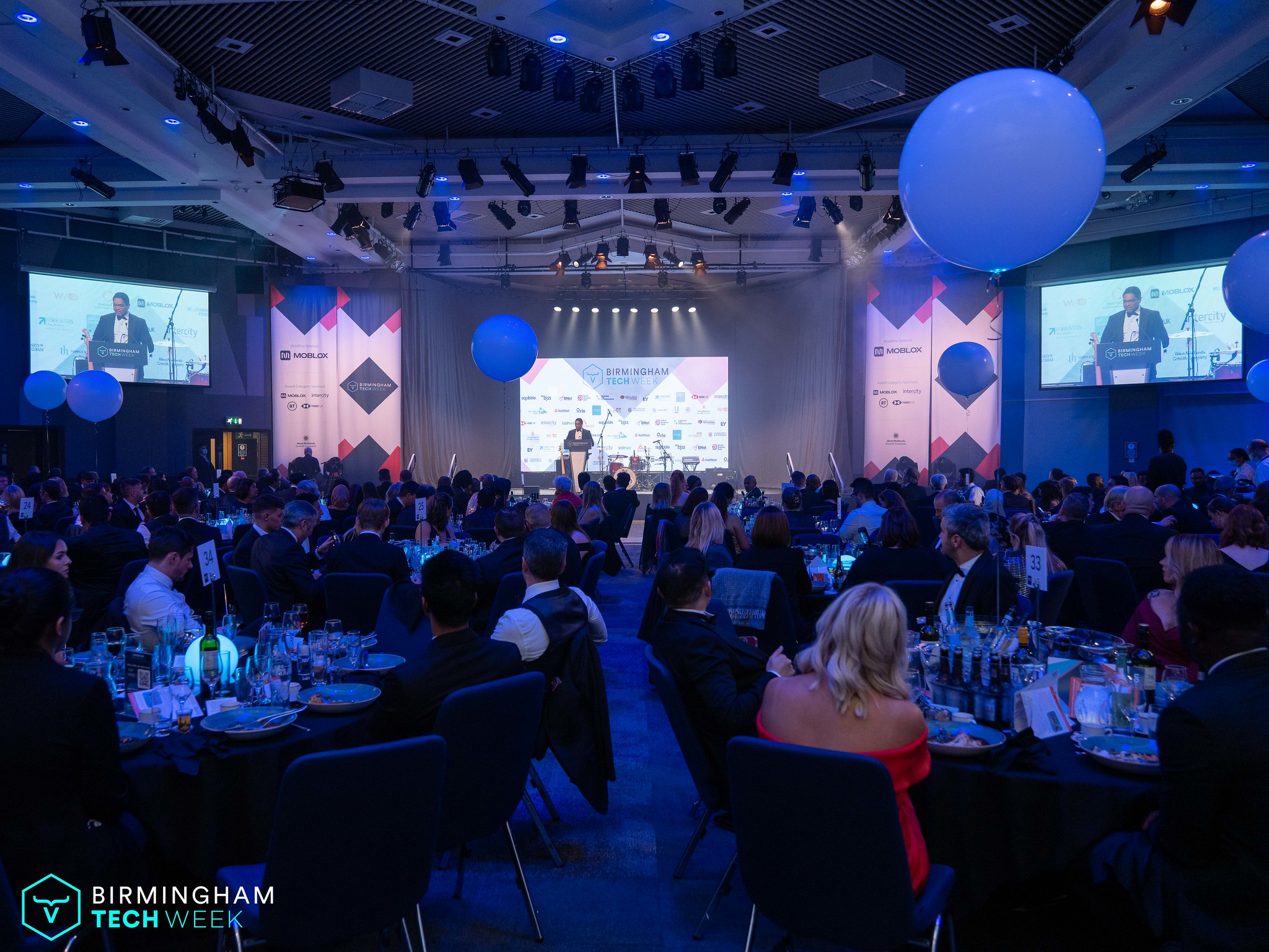 This year’s Birmingham Tech Week (11-15 October) brought together 1,500 attendees for face-to-face events, and over 1,000 for online sessions, to celebrate the achievements of the West Midlands’ tech sector and explore its future significance as the country’s fastest growing digital hub.

Organised by Birmingham Tech and in its third year, the largest regional technology and innovation festival in the UK took place following the release of data from London Economics* and glass.ai** revealing that the West Midlands is home to the largest emerging technologies cluster outside the capital, as well as new findings from the UK’s Department for Culture, Media and Sport (DCMS), which declare the region as the country’s fastest growing tech sector.

The week-long festival saw a number of significant developments which further strengthen the region’s burgeoning tech ecosystem, including the soft launch of the Birmingham Knowledge Quarter. The Quarter represents an alliance led by Birmingham City Council which will bring together 11 institutions, more than 40,000 students, 170 innovators and investors over 50 hectares to create an innovation hub that drives Birmingham’s growth. During Tech Week work also began on the development of the Birmingham Health Innovation Campus at Birmingham University, set to become a world-leading life sciences centre for accelerating the development and adoption of healthcare innovations.

“Birmingham Tech Week has provided invaluable opportunities for knowledge sharing and networking as well as celebrating the West Midland’s fast-growing tech sector, which is firmly on the map as the UK’s leading hub for emerging technologies, underpinned by a thriving start-up scene and deep talent pool.

“Emerging tech is pivotal to the UK’s economic competitiveness, and with the West Midlands leading advancements in this area, the upcoming 2022 Commonwealth Games represents a once-in-a generation opportunity to showcase the strength of the region’s technology cluster to the global investment community.”

The event programme was more diverse than ever, with 17 live and 18 virtual events, featuring over 150 industry-leading experts, including founders, C-suite figures and local representatives. Keynote presentations included a talk on future digital trends from Roland Emmans, HSBC’s UK Tech Sector Head and a speech from Adrian Corcoran, CIO of the Birmingham 2022 Commonwealth Games.
The closing event for the week was a Black-Tie Dinner & Awards for 550 tech leaders which spotlighted the achievements of the region’s leading technology investors and most exciting start-ups, such as Nourished, the Birmingham-based 3D edible vitamin brand founded by Melissa Snover, which won the Tech scale-up award. Last year Melissa achieved the largest-ever seed round by a female founder in the UK, raising £1.95 million.

The Tech Leader award went to Karl Nicholson, CIO of digital transformation business Synaptek/Spherica, with the Start-up award going to Energym, the world’s first fitness bike that converts work outs into electrical energy. The Young Person award was won by Birmingham City University Computer Science student Siddharth Joshi, for his work as an application developer for Energym and participation in the Birmingham Open Hack 2021 held in partnership with NASA Space Apps.

The awards highlighted the success and deep expertise of the West Midlands’ technology scene, which have been evidenced in a new comparative analysis of the country’s future tech capabilities showing that of all UK regions, the West Midlands is home to the largest emerging technologies cluster outside the capital. Led by London Economics* and glass.ai**, The Emerging Tech Capabilities in the West Midlands study found the West Midlands has the largest spread of up-and-coming tech strengths out of the country’s core city regions, as well as the highest number of companies developing new tech, surpassing the volume of expertise in both Greater Manchester and Leeds City Region.

These findings are complemented by those of DCMS’ recent Assessing the UK’s regional digital ecosystems report, which showed that West Midlands’ tech sector grew by an average of 7.6 per cent a year between 2014 and 2019, making it the fastest growing region in the UK, and will create 52,000 digital tech jobs and grow the sector by £2.7 billion by 2025. Recent data from job search engine Adzuna and investment analysts Dealroom for the UK’s Digital Economy Council and Tech Nation shows that tech companies in the West Midlands are on track to raise more venture capital investment in 2021 than they did a year earlier, and tech job vacancies advertised in the region have almost doubled since December 2020.

Gurjit Jagpal, Managing Director and head of the Birmingham office at Goldman Sachs – one of the week’s sponsors, said:

“Goldman Sachs is expanding in Birmingham because of the city’s deep pool of talent, strong academic institutions and growing eco-system for finance and technology. We were delighted to be a part of Birmingham Tech Week and look forward to continuing our involvement in the innovation happening across the city and wider region”.

“The tech sector in our region is booming. We have a huge number of successful start-up and scaling businesses and a growing ecosystem powering FinTech to EdTech. Everyone has been working hard to shine a spotlight on the West Midlands so there’s a real sense of celebration and collaboration across the city."

Birmingham Tech Week comes as the city prepares to host the Birmingham 2022 Commonwealth Games. A three-year programme to boost the long-term economic impact of the Games launched this summer in anticipation of international attention turning to the region.

The Business and Tourism Programme (BATP) is designed to secure more than £650 million of new overseas investment into the UK and create £7 million of additional export deals until 2027. It is also expected to attract an estimated £12 million in visitor spend. Through BATP businesses, investors and entrepreneurs in the West Midlands will be able to capitalise on the profile of the Games and its audience of 1.5 billion people. Activity will include sales missions, showcase events, marketing campaigns, a media programme as well as targeted meetings with investors, making BATP key for attracting investment in the tech sector and creating opportunities for investors and entrepreneurs within the local tech community.