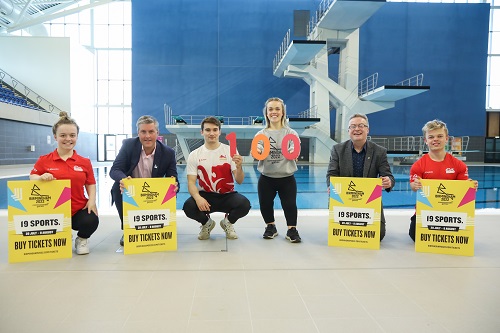 With 100 days to go until the Birmingham 2022 Commonwealth Games begin, Paralympic swimmers and an Olympic diver tested out the facilities at the newly completed Sandwell Aquatics Centre.

The brand-new, state-of-the-art venue has been constructed in time for this summer’s major multi-sport event, where it will be in operation for all eleven days of sporting action. Once the Games is over it will be converted to a community leisure facility, so local club swimmers also joined Tuesday's celebrations, to test out the main 50m pool.

Birmingham 2022, organisers of the Games which will see around 4,500 athletes from 72 nations and territories compete in 19 different sports and eight Para sports, also marked the 100-day milestone with a final major release of tickets, with seats for every single sport back on sale.

Paralympic swimming legend, Ellie Simmonds, who is also a Birmingham 2022 Board Member, visited the centre on Tuesday and highlighted why this was such a key moment for the Games:

“With 100 days to go until the Birmingham 2022 Commonwealth Games begin, it is fantastic news that the Sandwell Aquatics Centre is now complete, and it is amazing to be back here to see the finished facility.

“This is an important and proud moment for everyone associated with Birmingham 2022 and having swimmers and divers in the pools for the very first time makes the Games feel real.

“We’ve also taken this opportunity to put tickets back on sale, but for sports like aquatics, which has been hugely popular during our ballots and general sale, tickets are limited, so I’d urge everyone to secure their seat right now.”

The construction of the Sandwell Aquatics Centre, which is located in Smethwick, just a few miles from Birmingham, has been overseen by Sandwell Council and Tony McGovern, Director of Regeneration & Growth said:

“We are very proud to celebrate the completion of the state-of-the-art Sandwell Aquatics Centre in Smethwick.

“This is a testament to the hard work and dedication of our construction partners, who worked diligently throughout the project and a global pandemic to complete this venue on time and on budget.

“We are incredibly excited to be part of the Birmingham 2022 Commonwealth Games, which will be a once in a lifetime opportunity to celebrate Sandwell on a global stage as the proud host venue for the swimming, Para swimming and diving events for the Games.

“We want the whole community in Sandwell and beyond to benefit from the world-class swimming and diving facilities at this fantastic new facility. More than that, the new Aquatics Centre is supporting our vision to boost the health and wellbeing of our communities, driving economic growth and regeneration, and improving transport links.”

"It is fantastic that with 100 days to go, Sandwell Aquatics Centre is ready for competition - completed on time and within budget.

"The venue is just one of the ways in which Birmingham 2022 will level up access to sport and champion the best of the West Midlands to the world. It is not too late to snap up tickets for this sporting spectacular."

“As we reach the final sprint, Birmingham and the West Midlands should be enormously proud of all the Games progress to date. The Sandwell Aquatics Centre is an impressive, world-class, community-focused facility and I’ve no doubt all remaining tickets will be in high demand when they go back on sale today.”

“We’ve come so far over the last four years since Birmingham was named as Proud Host City for the Commonwealth Games.

“The hard work put in by everyone involved is clear to see and the finishing touches are now being made to ensure the city and wider region are a perfect platform to bring people together for the biggest event to be staged in our history.

“This is our chance to be bold and deliver a golden decade of opportunities for Birmingham.”

Now that the Sandwell Aquatics Centre has been completed, the facility will stage a couple of events ahead of the Games. On 30 April a community swimming gala will be overseen at the venue by Sandwell Council and then from 20 May to 22 May Birmingham 2022 will stage a series of test events including swimming and diving training sessions, and a swimming competition where tickets will be allocated to local residents and the swimming community.

Tickets for every single sport at Birmingham 2022 went back on sale at 8am on 19 April, with prices starting from £8 for under 16s and £15 for adults. Tickets also include access to public transport in the local area on the day of your event.

Go to birmingham2022.com/tickets to find out more and check availability.