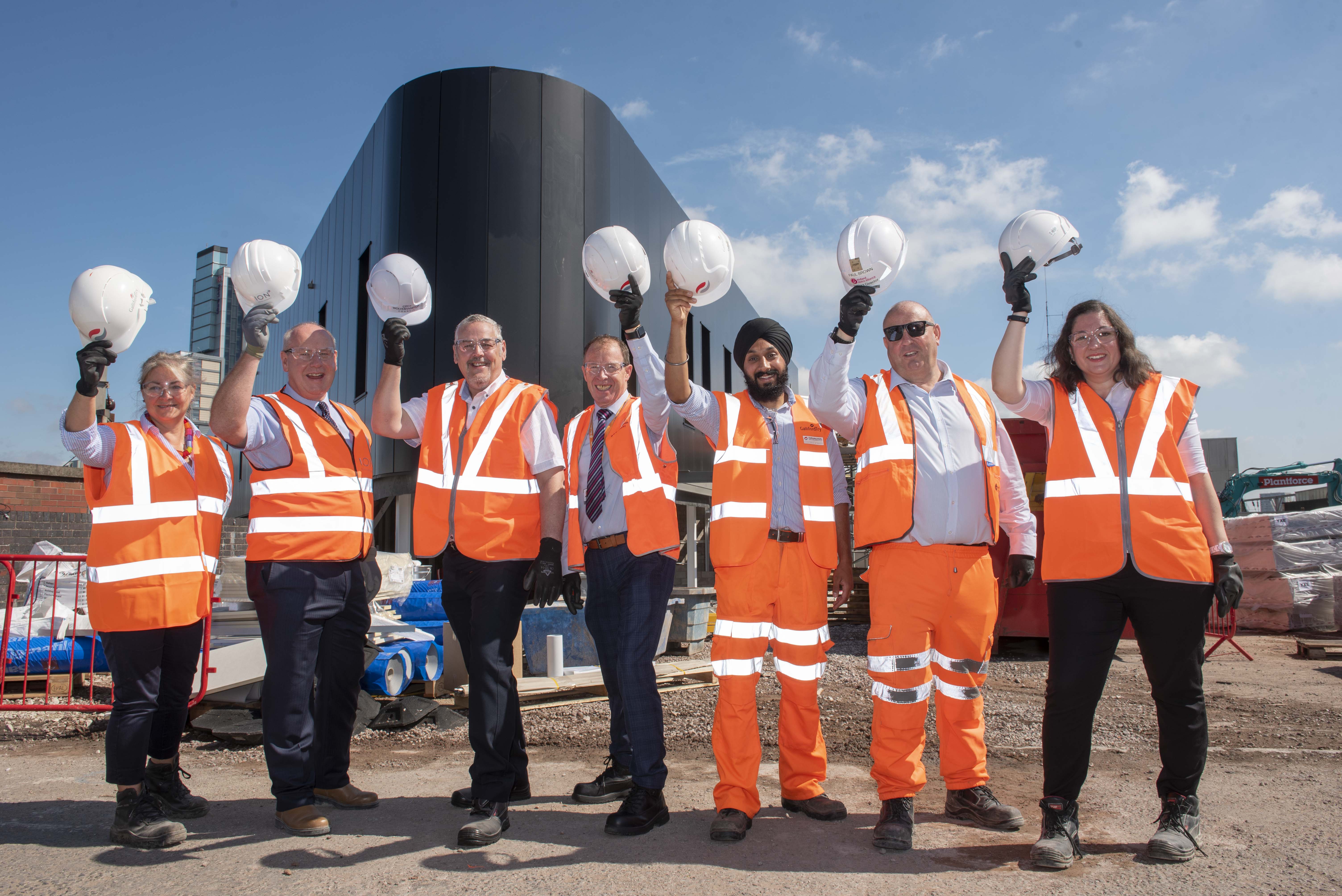 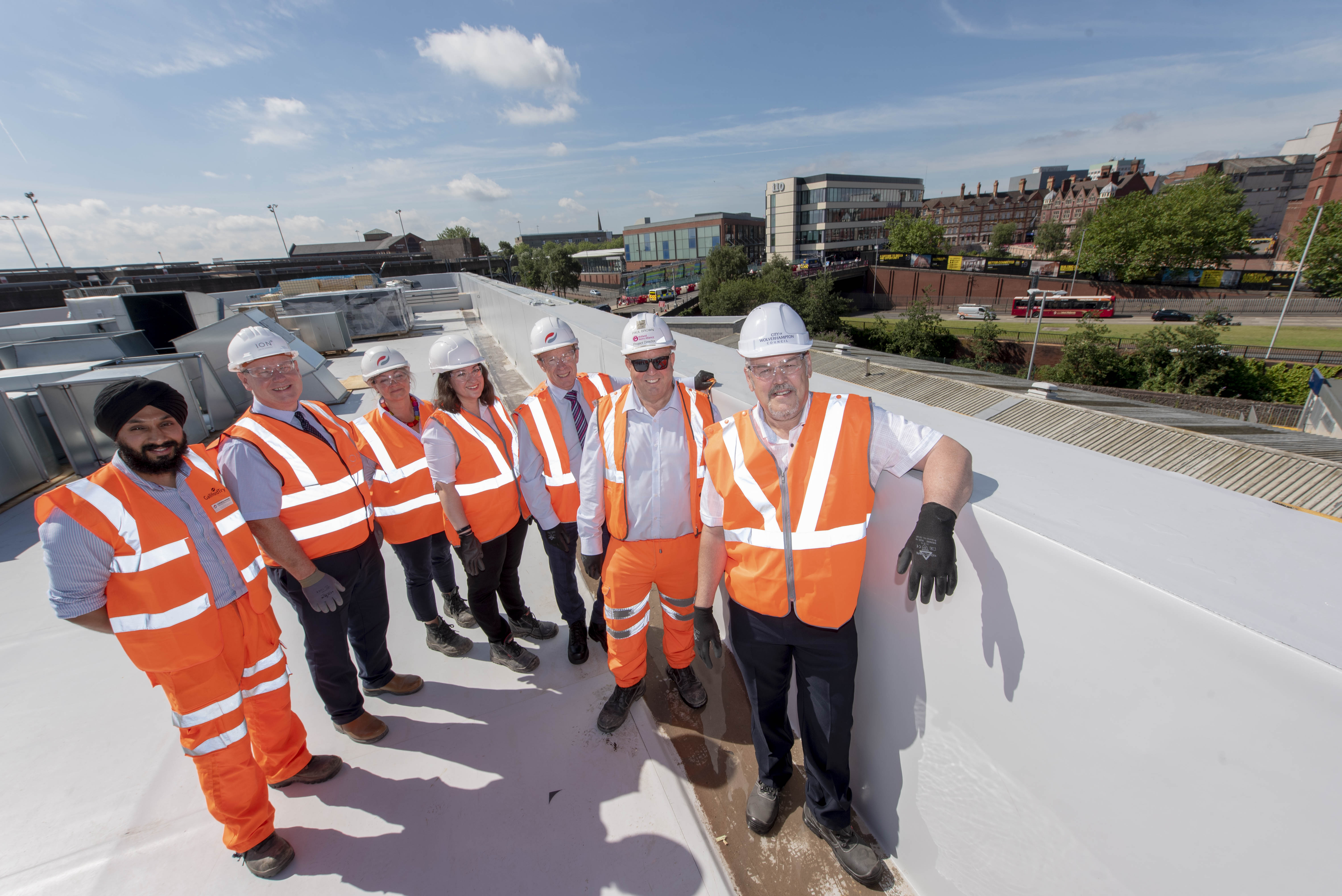 The Wolverhampton Interchange project has hit new heights this week with the completion of the roof on phase one of the new railway station.

Contractors Galliford Try finished laying the foundations in February, following the demolition of the former British Transport Police building, and a small section of the current station building next to Platform 1.

The roof is now watertight, the ground floor and first-floor slabs have been fitted, and work has begun on installing the external cladding on the building.

Work has also started on the ground floor and first floor partitions, installation of internal services and the windows are due to be fitted.

It is all part of delivering a £150 million transport hub to provide an attractive commercial gateway to those entering the city by national rail, bus or tram.

As there will be no changes to the platform areas as part of the scheme, this has allowed it to be cleverly designed in two phases to ensure train services from the City of Wolverhampton continue to operate as normal throughout.

The first section of the new station building is expected to become operational to customers later this year when phase 2 of the programme – bringing down the remainder of the current station building and completing the new build - will also start.

The new state-of-the-art railway station building to serve the city will be fully open in summer 2020.

“A lot of hard work has been put in by all the partners on the Interchange scheme and it is heartening for everyone in the city to see the vision of the new railway station becoming a reality.

“There is more than £4.4 billion of investment on-site or in the pipeline across the city, and the railway station development is a big part of how we are re-imagining and re-inventing our city centre.

“We want great connectivity to get people here; a first-class station to welcome visitors to our city; great public spaces that encourage people to linger longer; great new city centre homes that bring new customers to our businesses; a great leisure and sporting offer that brings fans from far and wide; a vibrant public events programme and outstanding arts and culture offer enticing new audiences and visitors; and finally, a thriving commercial district with well-paid jobs and executives who spend time and money in the city centre.”

“With the station development nearing completion we are another step closer to delivering a transport hub in Wolverhampton city centre. The final part of West Midlands Metro extension along Pipers Row will be completed taking trams to both the rail and bus stations offering travellers a seamless journey fully integrated into the wider West Midlands network and the planned HS2 stations.

“As well as providing a modern gateway to the city centre for visitors it will be a catalyst for new investment, contributing to the jobs and growth the area needs.”

“Travelling by train has never been more popular and millions of journeys are made using Wolverhampton station every year. City of Wolverhampton Council is delivering fantastic improvements which will bring huge benefits to transport users.

“We are equally committed to giving our passengers the best possible experience at every stage of their journey and are investing £1billion in improving train services across our network.”

“The delivery of Wolverhampton Railway Station is being undertaken through an innovative partnership between the private and public sectors, working closely to deliver this complex scheme.

“The Railway Station is the key component in the Interchange development and its completion will allow the overall masterplan to be progressed including the development of the Banana Yard and Steam Mill sites for a range of business, leisure and hospitality uses.

“It is from this point forward that the vision for the Interchange will really take shape as we see another important component of Wolverhampton’s dramatic re-development come to life.”

“The new Wolverhampton station is really taking shape. We are committed to providing a better railway for passengers and, as part of the Railway Upgrade Plan, we are working closely with the City of Wolverhampton Council, West Midlands Combined Authority and West Midlands Trains to help provide this much-needed boost in the city.”