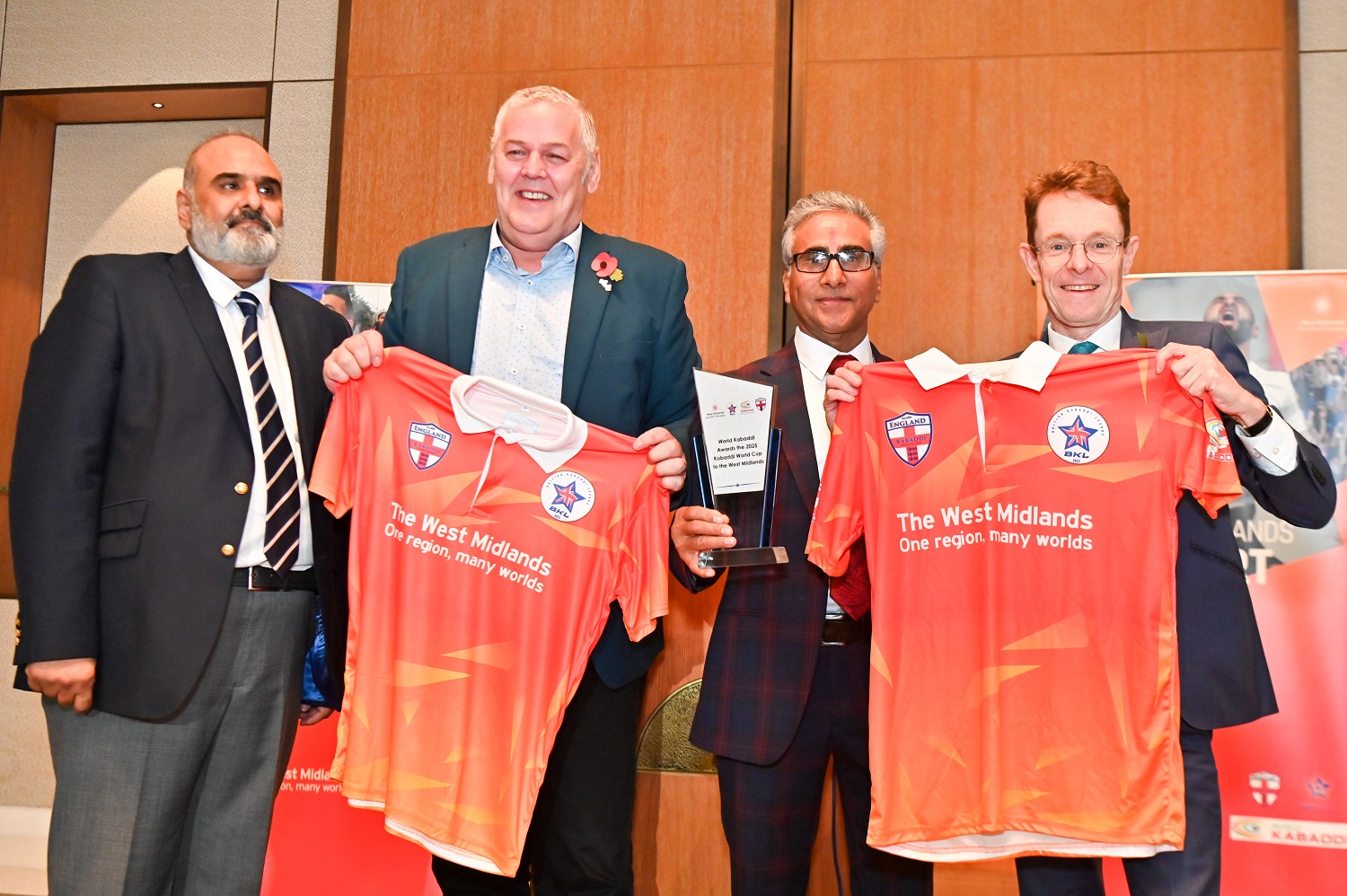 The West Midlands will host the 2025 Kabaddi World Cup, the World Kabaddi Federation has announced today.

The UK region will become the first destination outside of Asia to host the sport’s most prestigious global tournament, which will feature the world’s best kabaddi players from leading men’s and women’s teams, including India, Iran and Pakistan. The tournament will take place across the West Midlands during the first quarter of 2025.

The news was revealed as part of a West Midlands trade mission to India (6-12 November), led by the region’s Mayor Andy Street and Portfolio Lead for Economy and Innovation at the West Midlands Combined Authority, Cllr Ian Brookfield. The week-long mission will create opportunities for bilateral trade and investment between India, the West Midlands and wider UK.

Kabaddi is the fastest-growing sport in South Asia, and the second most popular after cricket. Originating in India some 5,000 years ago, the contact sport sees teams broken down into raiders and blockers, with the aim of scoring points by entering opposition territory, tagging an opponent and making it back into their own half without being tackled to the ground. It is now played in more than 50 countries, having grown in stature as a mainstream sport.

The 2025 Kabaddi World Cup will be organised by England Kabaddi, Scottish Kabaddi and the British Kabaddi League. The West Midlands Growth Company (WMGC), the region’s official economic development agency, will support and champion the event to ensure its impact is felt across the West Midlands and the UK.

The World Cup will provide a further opportunity to build business and trade links between the West Midlands, UK and India, complementing WMGC’s work with the award-winning West Midlands India Partnership. Plans for the tournament include a Business and Trade event, showcasing the best of Indian businesses in the West Midlands.

“Awarding the 2025 Kabaddi World Cup to the West Midlands in the UK was a straightforward decision and a very exciting milestone in the global growth and expansion of the sport across Europe.

“Kabaddi is a sport for everybody, regardless of age, gender or social background. As we’ve seen with the launch of the British Kabaddi League earlier this year, and the vibrancy and ambition on show during the hugely successful Birmingham 2022 Commonwealth Games, the West Midlands is a region, which promotes positive community engagement, celebrates cultural diversity and inclusion, and loves its sport.

“We look forward to engaging with businesses and people across the West Midlands and introducing more new fans to our fast and entertaining sport as we create a memorable first World Cup outside of Asia.”

The West Midlands’ ambitious Major Events Delivery Plan – led by the Business and Tourism Programme (BATP) – aims to capitalise on the region’s long history of hosting internationally significant sporting events, by attracting further global fixtures to the region within the next five years. Major tournaments that have taken place in the West Midlands include the Birmingham Classic WTA tournament, international cricket at Edgbaston Stadium and the All England Open Badminton Championships.

In April, the West Midlands hosted the launch of the new annual British Kabaddi League, with three of the eight professional teams representing the region – these included Wolverhampton Wolfpack, Walsall Hunters and eventual winners Birmingham Bulls. Matches took place between April and May across the UK, in major cities including Wolverhampton and Birmingham.

“Winning the right to host the 2025 Kabaddi World Cup builds on the successful launch of the British Kabaddi League in Wolverhampton last spring, together with our partners England Kabaddi and Scotland Kabaddi. We are grateful for their support in setting up the new domestic league, which has helped pave the way for this momentous announcement.

“We look forward to working with organisations such as Sport England and Sporting Equals to use the World Cup as a catalyst to introduce kabaddi into more schools, colleges and universities across the West Midlands, inspiring our young and diverse population to be more physically active and engaged in sport.

“We have two years now to take the learnings from the 2022 Commonwealth Games to ensure we can achieve maximum impact from hosting this prestigious global event.”

“Kabaddi is a hugely popular sport in South Asia – especially in India where it’s second only to IPL cricket. Given how many communities of South Asian heritage call the West Midlands home, it’s a real honour and tremendously exciting that we will play host to the first Kabaddi World Cup to ever be held outside Asia.

“Following on from the success of the spectacular Birmingham 2022 Commonwealth Games, we’re committed – through our Major Sporting Events strategy - to attracting global tournaments that build on the Games legacy and resonate with local people.

“This Kabaddi World Cup announcement further enhances our region’s reputation as one of the world’s leading destinations for major international events. Long may that continue.”

More information about purchasing tickets for the tournament will be made in early 2023. For further details about the West Midlands’ major sporting events offer, visit https://www.meetbirmingham.com/major-sporting-events.