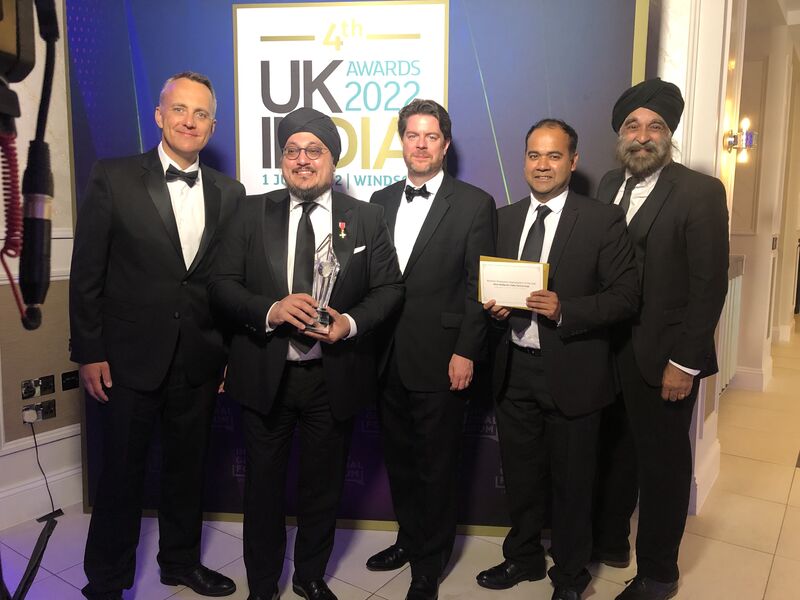 The West Midlands India Partnership (WMIP) – an initiative focused on enhancing UK-India relations while boosting trade, investment, connectivity and partnerships between the West Midlands and India - has been named Business Promotion Organisation of the Year at the prestigious fourth UK-India Awards.

Organised by the India Global Forum, the UK-India Awards represented the culmination of India Global Forum’s UK-India Week. Held on Friday 1st July at Fairmont Windsor Park, Shyam Nabar , Director of WMIP, accepted the award, which recognised “the most proactive, prolific, and impactful business promotion organisation in the UK-India corridor”.

Founded by the West Midlands Growth Company, West Midlands Combined Authority and Indian Consulate in June 2020, the Partnership builds on India’s strong track record of foreign direct investment (FDI) in the West Midlands, acting as a single point of contact for potential new investors. It supports the region’s long term economic growth plans by developing stronger links and opportunities for collaboration as part of a five-year programme of activity within the Indian market. WMIP goes beyond the transactional relationship, developing stronger ties across civic partnerships, cultural collaboration and working on the living bridge of over 5000+ students and 200,000 people of Indian origin.

WMIP’s Executive Board is led by influential organisations, including the Confederation of Indian Industry, PwC and the State Bank of India, together with an advisory board which includes Lord Karan Bilimoria, Baroness Usha Prashar and the former UK Minister of State for Digital and Creative Industries, Margot James.

Since its launch, the Partnership’s stand-out achievements include contributing to creating 300+ jobs by working with companies such as Norton Bikes, Ola Mobility, Infosys, TCS and Mahindra BSA. The Partnership was also involved in hosting national and international artists such as Shankar Mahdevan and Zakir Hussain at Birmingham Symphony Hall.

“The levelling up agenda is crucial to unlocking the UK’s economic potential and over the last two years, the West Midlands India Partnership has made this a key focus. Despite being launched amidst the challenges of the pandemic, it has already brought valuable jobs to the region and with a number more exciting projects in the pipeline, it looks set to deliver results for many years to come.”