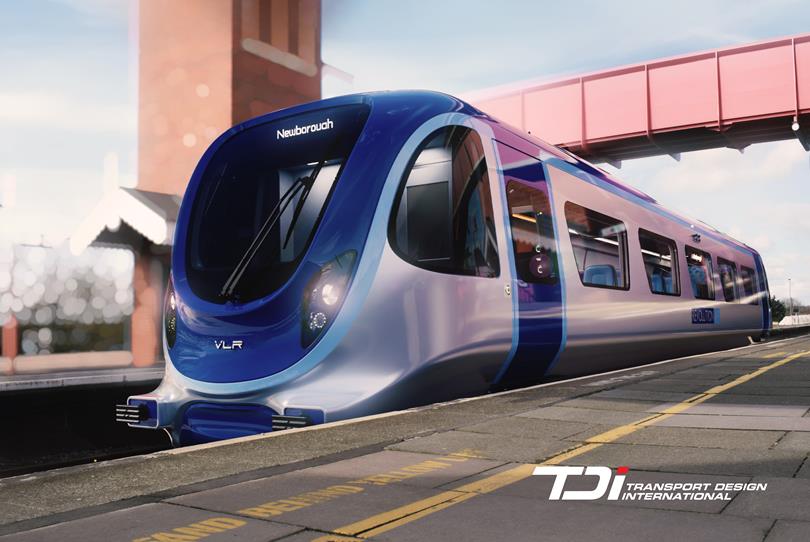 This year should see not one but two prototypes of very light rail vehicles being tested in the UK. Karol Zemek talks to Dr Nick Mallinson, Programme Manager at WMG Centre of the High Value Manufacturing Catapult at the University of Warwick, about the research taking place into this potentially disruptive technology.

The UK should see its first examples of very light rail vehicles later this year, when two prototypes are to be rolled out. Although intended for different applications, they have the design target of a mass not exceeding 1 tonne per linear metre, which is the definition of VLR.

The first concept to be rolled out is likely to be Revolution, intended for use on heavy rail branch lines. This will be followed by a vehicle designed for street-running and urban applications. Both are being developed as part of a wider research programme that aims to introduce lightweight and low-cost rail vehicles and trackform.

Construction of the Revolution VLR prototype is due to begin shortly, with completion planned for early April 2020. This will be followed by a period of testing and demonstrations led by rolling stock company Eversholt Rail. Eversholt is part of the Revolution VLR consortium led by Transport Design International, Cummins, Prose, Transcal Engineering, RDM Group and WMG at the University of Warwick.

From radical to very light

The VLR research programme has its origins in the Radical Train programme, developing innovative approaches to R&D in the rail sector. The Rail Safety & Standards Board issued a funding call for this in 2014, and Stratford-upon-Avon based TDI led a proposal to develop a lightweight self-propelled rail car that eventually became the Revolution VLR project. This subsequently evolved into a full demonstrator vehicle, inspired by the Parry People Movers-built shuttle vehicle that operates on the branch line serving Stourbridge in the West Midlands. TDI had previously worked with Severn Lamb on the ULR Express railcar for employee transport on an industrial line at Konya in Turkey.

The government provided funding to take forward the expanded set of proposals. WMG is an academic department at the University of Warwick and drives innovation in science, technology and manufacturing though collaboration with industry. It was brought in to introduce ‘disruptive thinking’ to the rail industry, and it is responsible for the conceptual approach and design of the powertrain. Its study into the most efficient propulsion method found this to be a diesel-electric hybrid with battery energy storage.

The total project was costed at £5·5m. The Department for Transport is contributing £2·75m, with further funding coming from the consortium partners.

WMG’s Dr Nick Mallinson recalls that the train operators to whom the consortium spoke were not interested in participating, so the attention shifted to the rolling stock leasing companies. On joining the consortium, Eversholt committed to take the vehicle to market. Development of the full-size demonstrator then started in early 2018.

Coventry-based autonomous pod manufacturer RDM is to build the vehicle at its existing site, which it is expanding for this purpose. WMG, Cummins and Avid, a company based near Newcastle, are currently laboratory testing the engine, generator and battery pack.

The bidirectional vehicle will be around 18 m long, with capacity for 56 seated and 60 standing passengers. Components have been chosen with the aim of minimising the mass: a pair of seats weighs around 20 kg, while still certified for railway use. In addition to a lower initial cost, a lightweight vehicle offers better fuel consumption and causes less wear on the track. These factors could help to make a financial case for reopening some branch lines. However, the drawback of a lightweight vehicle is that its lower crashworthiness could make it unsuitable for mixed traffic lines. Mallinson suggests that this limitation could eventually be overcome with more accurate traffic management and digital signalling that allows the position of every train on the network to be known with greater precision.

Revolution came to the attention of Coventry City Council in 2017. The city’s Director of Transportation Colin Knight saw the potential of VLR, but sought to deploy it in a traditional urban setting with street running. He sees this as a possible solution to counter the problems of traffic pollution and congestion.

The city council favours urban rail over the previously proposed bus rapid transit, partly because it is more likely than BRT to encourage a modal shift away from cars. Many cities that have introduced trams have seen a noticeable modal shift, as well as economic uplift along the route. This is a further point in rail’s favour: there is less risk of services being withdrawn once permanent way has been installed.

The drawback of a tramway is that it is costly to build, at around £50m per kilometre being typical for such schemes in the UK. With a population of 350 000, Coventry is too small to make a financial case for government funding towards a tramway, and is therefore seeking an offering that would cost closer to £10m per kilometre.

Working towards this target, WMG published a feasibility study in late 2017 on ‘what a 21st Century tramway would look like’, in Mallinson’s words. The council awarded WMG a contract in April 2018 to manage the work on a low-cost vehicle and trackform. The Coventry & Warwickshire Local Enterprise Partnership has contributed £2·5m towards the first phase of R&D, and a further £12·2m is coming from the West Midlands Combined Authority.

Transport for West Midlands is responsible for operational aspects such as safety, security and communications. The city council is planning the initial route. Subject to successful tests and obtaining a Transport & Works Act order, it is hoped that construction could begin in 2024 for opening in 2025.

The 8 km line would link Coventry’s main station with the university hospital in the northeast via the city centre. A forecast by consultancy WSP predicts up to 9 million passenger-journeys a year. Around 80% of the route would run in mixed traffic, as the urban environment in central Coventry leaves very little room for segregated tracks.

Research into the vehicle for Coventry started in mid-2018. As design partner, TDI has subcontracted some work to other companies, and is currently contacting potential component suppliers. RDM is to assemble the prototype, which should be completed in October 2020, ahead of testing.

The bidirectional vehicle will use battery traction to eliminate the need for catenary, with the batteries charged using equipment designed for electric buses. The 11 m long vehicle will have 20 seats and capacity for 30 standing passengers. Rather than a traditional tram, the city council favours smaller vehicles running at 3 to 5 min headways.

Such a service pattern will require a relatively large fleet, and therefore many drivers. To mitigate the additional operational expenditure, autonomous operation is being studied. Prototype collision detection technology developed for road vehicles will be fitted to a CAF tram in Birmingham to shadow the driver’s behaviour and gather data to demonstrate how automation could compare to human operation.

WMG expects to select an industrial partner for the track research this month. Six companies prequalified out of 11 that responded to a call for expressions of interest. Mallinson says that many suppliers were sceptical of the feasibility of developing track that could support the target cost of £10m/km, but others saw that this is a necessary condition for the development of modern urban rail. He underlines that the rail industry is still risk-averse, and the research team has had to ‘press suppliers into thinking differently’.

To remove the need for utility diversion, the track will be embedded in a 250 mm thick slab mounted in the tarmac layer of the road. The slab will be manufactured off-site and transported in 6 to 8 m long sections and clipped together in situ. The slabs are designed to be removed within 90 min to allow access to utilities. One option being studied for the slab material is a high-strength foam core with a layer of recycled plastic on top.

The track is to be tested at an innovation centre that is being built in Dudley. WMG has been working with Dudley borough council to raise the required £28m of funding. Two test sections will be built: a ballasted track for Revolution, and a special purpose zone to evaluate the on-street trackform.

The latter will be 350 m long and include a 15 m radius curve, as specified by Coventry city council to cope with the narrow streets. Its durability will be tested by repeatedly running the equivalent of a 44 tonne lorry over it. This trial section will be used to evaluate the trackform, the vehicle and the interaction of both together.

RSSB has set out a list of possible routes where VLR could be deployed. There are hopes that the lightweight, low-cost technology could make reopening abandoned railways easier. These disused tracks are the site of Keele station, which could be served by a branch from Stoke-on-Trent.

Mallinson is optimistic about the future of VLR, pointing to the involvement of Eversholt as a demonstration of interest from the market. This is buttressed by the willingness of many UK-based companies to form a supply chain, and the belief shared by the government that interest in the technology has reached critical mass.

But there are still challenges to overcome with introducing the idea to quite a risk-averse industry, as Mallinson acknowledges. However, he asserts that the work is starting to have an impact on how people think about rail technology.

His optimism is backed up not only by the RSSB’s list of branch lines with potential for Revolution, but also by the lengthy list of cities and towns that WMG has identified as suitable for a Coventry-style VLR shuttle. This extends beyond the UK and shows the technology’s export potential.