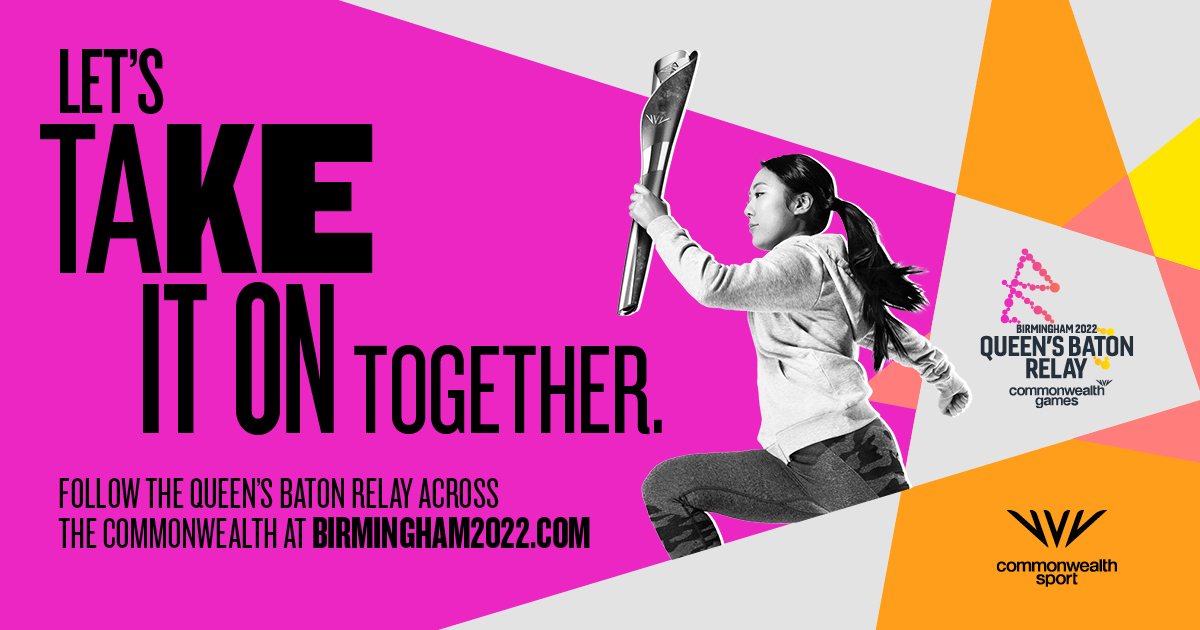 Today, Her Majesty The Queen has officially launched the Birmingham 2022 Queen’s Baton Relay in a unique ceremony at Buckingham Palace.

The Queen, accompanied by The Earl of Wessex, attended a special ceremony on the forecourt of the Palace to launch the 16th official Queen’s Baton Relay. They were joined by Batonbearers made up of athletes who will be competing in next year’s Games, young flagbearers from the West Midlands, the Birmingham 2022 Hometown Heroes and representatives from across the Commonwealth.

The Baton was delivered to Buckingham Palace after being carried from Horse Guards Parade and down the Mall by the Birmingham 2022 Hometown Heroes, champions of grassroots sport in the West Midlands, who were accompanied by a Tri-Service military band. One of the Hometown Heroes, Kevin Dillon, a boxing coach from Brierley Hill, brought the Baton to the stage, commencing the start of the ceremony.

The Queen and The Earl of Wessex, Patron and Vice-Patron of the Commonwealth Games Federation respectively, met the designers and manufacturers of the Baton, which was unveiled in Birmingham last week. The Baton was created in a West Midlands collaboration that fused art, technology, and science. Made from copper, aluminium and steel, the Baton also features a platinum strand in homage to Her Majesty The Queen in her Platinum Jubilee year.  It is also equipped with cutting-edge technology; 360 degree-camera, heart rate monitor, atmospheric sensors and LED lighting.

Dame Louise Martin DBE, President of the Commonwealth Games Federation, and The Chairman of the Organising Committee for the Birmingham 2022 Commonwealth Games, Lord Lieutenant of the West Midlands, John Crabtree OBE, also accompanied The Queen in the ceremonial party.

Her Majesty’s message was brought to the stage by Haseebah Abdullah, another Hometown Hero and England’s first hijab-wearing boxing coach. The Queen then placed Her message to the Commonwealth into the Baton, for it to be sealed and locked. The Queen’s message will be read out in full next year at the Birmingham 2022 Opening Ceremony.

Four-time Paralympic gold medallist, Kadeena Cox, had the honour of being the first Batonbearer to receive the Baton from The Queen, marking the official start of the 16th Queen’s Baton Relay. She then passed it to Team England squash player Declan James and Team Wales boxer Lauren Price who were positioned at The Queen Victoria Memorial.

More than 70 young people from Birmingham lined the stage and held flags from all the nations and territories of the Commonwealth. The flagbearers were made up members of Birmingham City Council’s Youth City Board, plus over 50 individuals from Wilson Stuart School, CORE Academy, Hall Green School and King Edward VI Handsworth School.

The official Birmingham 2022 mascot, Perry, who wore his bespoke tuxedo instead of his basketball kit for the occasion, was also in good spirits at the ceremony.

“We are honoured to host the Commonwealth Games in Birmingham next year, where they will not only be carbon-neutral for the first time, but also feature the largest para-sport programme in their history.

“Birmingham represented the country today as the Queen’s Baton Relay began, connecting the United Kingdom with the 72 nations and territories taking part in the Games.

“2022 will be a year of pride and celebration, and we look forward to welcoming athletes and spectators next year.”

“The Queen’s Baton Relay will convey a message of hope and inspiration and will connect peoples from across the Commonwealth during the build-up to the Games and as we look to celebrate Her Majesty The Queen’s Platinum Jubilee. This journey champions the miracle of difference, the individuality of humanity, yet speaks to a collective collaboration of a global community.

“Birmingham 2022 will be the Games for everyone, and the Queen’s Baton Relay is just one example of that.  We will come together challenging the transformational power of sport to unite us all.   Today has been a wonderful celebration for the launch of the Queen’s Baton Relay, and it will be a thrill and a privilege to follow the Baton on its journey and to hear the stories of all the people it meets and delights.”

“I am absolutely delighted we have finally arrived at this special moment, the launch of the Birmingham 2022 Queen's Baton Relay!

“This is a very important day for Commonwealth Sport as the message from Her Majesty Queen Elizabeth II visits our 72 nations and territories in this unique Baton. Traveling for 294 days, and covering 140,000 kilometres, the Queen's Baton Relay provides Birmingham and the West Midlands the opportunity to showcase itself on a global scale.

“It marks the final countdown to the Birmingham 2022 Opening Ceremony on 28 July and provides hope, harmony and cooperation across the Commonwealth at a time when it is needed most.”

“It was an absolute honour to participate in this once-in-a-lifetime event. Receiving the Queen’s Baton from Her Majesty The Queen was a moment I’ll keep with me for the rest of my life. It was also a privilege to share this special moment alongside six other incredible athletes from England, Wales, Scotland and Northern Ireland. It’s so exciting to think that this Baton will now travel across the Commonwealth, where other inspirational individuals will become Batonbearers in their own communities.”

Casey Bailey, Birmingham Poet Laureate said: “It is such a pleasure to be part of a celebration that is shining a light on Birmingham and the whole of the West Midlands. With so much to be excited about next year, this event really felt like it’s launched us into the festivities.”

Minister for Sport and the Commonwealth Games Nigel Huddleston said:

"The Queen's Baton Relay marks the countdown to the biggest and most exciting sporting event in Birmingham's history. Not only will the Commonwealth Games put the West Midlands on the global stage, it will showcase the UK's expertise in hosting inspirational and inclusive international events.

"2022 is set to be an exciting year of celebration for our country with the Games, Her Majesty The Queen’s Platinum Jubilee and the Festival UK* 2022 all taking place. The baton represents the start of this, and will travel through 72 Commonwealth nations and territories. I look forward to the relay connecting communities around the world and encouraging people to get involved in the Games, including the next generation of sporting heroes."

“It is an honour to have been in attendance as the Baton started its journey to all parts of the Commonwealth. The Relay is a fantastic opportunity for Birmingham to showcase everything that is great about the Proud Host City as excitement and interest builds ahead of the Games. It symbolises the strengths and qualities of the city and the Commonwealth – helping us to positively project Birmingham’s boldness to billions of people before it come back home next summer.”

“The launch of the Queen’s Baton Relay is always an incredibly special moment for the Commonwealth Games, and another key milestone on our road to Birmingham 2022. The eyes of the world will be on the West Midlands in just a matter of months now, and I for one cannot wait to show off our home.”

Tomorrow, the Baton will head to Birmingham Airport before departing for Cyprus – the first stop on the Queen’s Baton Relay.  From here, it will visit the other 70 nations and territories of the Commonwealth, before travelling the length and breadth of England on the way to its final destination – the Opening Ceremony of the Birmingham 2022 Commonwealth Games.

For more information on the Queen’s Baton Relay and to follow the Baton’s journey, visit birmingham2022.com/qbr