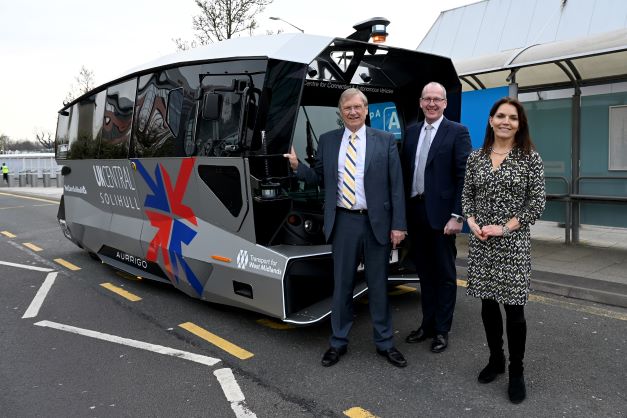 A state-of-the-art self-driving shuttle will take to the roads around Birmingham Airport, transporting passengers, as part of ground-breaking trials getting underway in Solihull.

This is the latest phase in an exciting Council-led project which aims to test out how Connected Autonomous Vehicles (CAVs) might be integrated into the borough’s transport network in the future.

Last year, Solihull Council became the first local authority in the country to purchase its own fully electric autonomous shuttle using a grant from the Greater Birmingham & Solihull Local Enterprise Partnership (GBSLEP). Designed and manufactured by Coventry’s Aurrigo, the futuristic looking Auto-ShuttleÒ can carry up to ten passengers and uses a suite of sensors, including LiDAR, to understand its surroundings and move around safely.

The zero emissions self-driving shuttle was initially demoed at the National Exhibition Centre (NEC) last Autumn, where it operated autonomously on Solihull roads for the first time, whilst carrying passengers along a pre-mapped section of Pendigo Way.

In this latest deployment the shuttle will be used to transport passengers around a longer and much more complex route at Birmingham Airport while again interacting with other road users. The trial route will provide Airport staff with a new temporary service linking the Departures entrance and Diamond House to Car Park 5. For the purposes of testing, the shuttle will be limited to a top speed of 20mph. In line with current legislation a safety operator will be on-board at all times, who will have the ability to take control of the shuttle at any point if required. As well as airport staff the passenger trials will also be open to members of the public who want to experience one of the first fully self-driving shuttles in the UK. Visitors to the airport can book their ride by going to: www.solihull.gov.uk/cavtrials

The CAV will be running at Birmingham Airport over the next six weeks.

Solihull, with technical assurance and support from Amey Consulting, is already playing a leading role in the development and deployment of CAV technology. Last month The Leader of the Council, Cllr Ian Courts, welcomed Transport Minister Trudy Harrison MP to the borough, showcasing some of the cutting-edge work being carried out in this sector.

The success of this trial will provide further knowledge and experience of self-driving vehicles in a real-world environment, providing the evidence to support the technology being rolled out in the future across Solihull.

“Autonomous technology promises enormous benefits to airports and the service companies that support them, with the potential to transform the way we work and improve efficiency and safety, for passengers, staff and other airport users.

“We are really excited to be working with Solihull Council on this trial, which will provide us with invaluable insight into how we can start to safely incorporate CAVs into our vehicle fleet. This trial of fully electric vehicles, and testing their capabilities on site, is making sure we are working towards our net zero carbon target by 2033.”

“It’s fantastic to see this fully electric autonomous vehicle operating at Birmingham Airport. We allocated £250,000 from our Local Growth Fund into this Solihull Council-led trial as we recognise the huge potential for Connected Autonomous Vehicles (CAVs).

“This is one element of our wider GBSLEP vision to deliver clean growth across our region. By reducing CO2 emissions and reducing congestion through shared occupancy, CAVs will have an impact on the way we all travel in the future. I would encourage any staff at the Airport to take part and experience one of the first fully self-driving shuttles in the UK!”

“We are delighted to be working with Solihull Council again to deliver another milestone, with Birmingham Airport becoming the first ever Airport to test our autonomous shuttles on their roads.

“Aviation is a major opportunity for Aurrigo, with a genuine desire to find new technologies that can improve the passenger experience. This could be through our driverless shuttles, our Auto-Sim modelling software or it could be through our Auto-Dolly cargo/luggage dolly that can replace the traditional tugs that are commonplace in airports all over the world.

This project forms part of the wider West Midlands Combined Authority (WMCA) funded UK Central investment programme, which is delivering a wide range of projects, from walking and cycling improvement schemes through to town centre redevelopments and build on the establishment of the Midlands Future Mobility testbed.

Further information is available at www.solihull.gov.uk/CAVTrials.