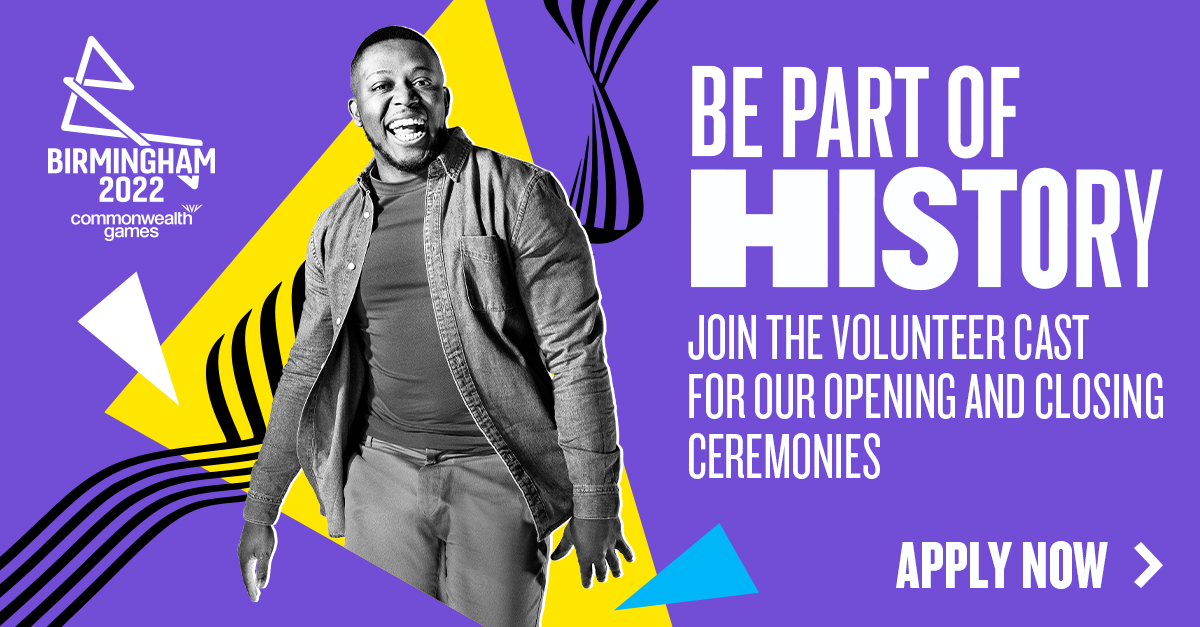 Applications open today for volunteers to join the cast of the Opening and Closing Ceremonies.  If you are based in the West Midlands and are passionate about music, dance and can move to a beat, apply now to be in with a chance to be part of something spectacular this summer.

The organisers of Birmingham 2022 Commonwealth Games have begun the search to find the volunteer cast, athlete hosts, and existing choirs who will bring this summer’s Opening and Closing Ceremonies to life.

The Birmingham 2022 Ceremonies Team is made up of some of the finest West Midlands creative talent, including, theatre director Iqbal Khan, award-winning writer Maeve Clarke, rapper Joshua 'RTKal' Holness, and Peaky Blinders creator, Steven Knight.  This team is calling for the most ambitious, outgoing, and dedicated local people to apply to be part of the performance that opens and closes the biggest sporting celebration since the London 2012 Olympic Games.

“The Games are getting very real now, and we need to find the best of this region’s vibrant talent to help us truly bring the creative vision and ambition we have for these Ceremonies, to life.
Performing at the Commonwealth Games is a once in generation opportunity – so get ready to show us what you’ve got if you want to represent your city and region on the biggest global stage.”

"The Opening and Closing Ceremonies will be fantastic highlights of the Birmingham 2022 Commonwealth Games. This is a unique opportunity to play a special role in the biggest sporting and cultural event ever staged in the West Midlands so I would encourage anyone in the region with an interest in performance to get involved."

“There are many ways to get involved with the Birmingham 2022 Commonwealth Games, from volunteering to buying a ticket to an event – but being a part of the ceremonies offers a fantastic way to become a direct part of the delivery of the biggest event in this city’s history.

“Birmingham and the wider West Midlands is full of talented, creative and helpful people, full of energy, who would be perfect cast members and Athlete Hosts. So, get your applications in now to be a part of history and two unforgettable ceremonies.”

These volunteer performers will be at the heart of the Opening and Closing Ceremonies, and aspiring talent is being urged to apply today for one of 2,000 opportunities on offer.  Specifically, the organisers of the Ceremonies hope to find:

The established choirs must have previous singing and performing experience and be able to learn show material from March and commit to regular rehearsal sessions beginning in July 2022, running all the way up to each Ceremony.

Athletes Hosts will be required to attend three rehearsals in July prior to the Opening Ceremony and one rehearsal before the Closing Ceremony in August. Interviews will take place between 1 March and 13 March 2022.

For all roles a full attendance schedule will be provided to successful applicants before they accept the role.

Applicants can find more information and register their interest for this opportunity by completing the online application form at www.birmingham2022.com/ceremonies  The deadline for receipt of applications is 23:59 on Monday 7 February 2022. To be eligible, applicants must be aged 18 years or older on 1 March 2022 (with the exception of the established choirs who have members aged 16 and over on 1 March 2022).