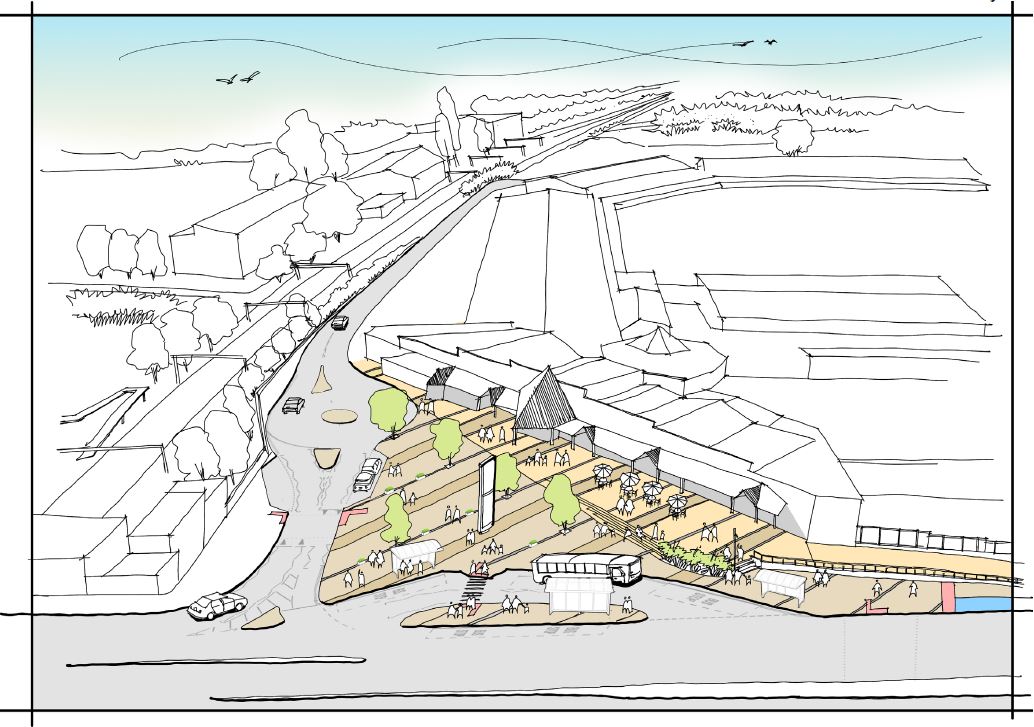 The on-going regeneration of Perry Barr ahead of the Birmingham 2022 Commonwealth Games has taken another step forward with the approval of plans for a new bus interchange.

The scheme is part of the overall £30.9m transport interchange development which includes the neighbouring Perry Barr railway station. This is also undergoing a major redevelopment and will be the principal station for Alexander Stadium – the focal point of next summer’s games.

Plans for the new bus interchange, which have been drawn up by Transport for West Midlands (TfWM) with support from Birmingham City Council will see an overhaul of how services pick up and drop off passengers.

It will also feature an improved frontage to the One Stop Shopping Centre with an expanded, pedestrianised public space. The project is backed with funding from the Greater Birmingham and Solihull Local Enterprise Partnership (GBSLEP) and the Ministry of Housing, Communities and Local Government (MHCLG).

The scheme, which has now been given planning approval by Birmingham City Council, has been developed by TfWM, which is part of the West Midlands Combined Authority (WMCA), to integrate with the new rail station and offer quick and easy transfers between bus and train while leaving a lasting transport legacy for the area.

As well as serving conventional bus services with new and improved shelters, it will also be used by the forthcoming Sprint rapid transit system which will offer local people, as well as visitors to the Games, a reliable, frequent and zero-emission travel option.

Andy Street, the Mayor of the West Midlands and chair of the WMCA, said:

“With up to one million spectators expected over the 12 days of the Games, it is vital that our public transport network offers easy, safe, and reliable services. This new Perry Barr bus interchange, alongside the new station, will help us do that.

“Not only will the Games help to show the leading role the West Midlands is playing in public transport investment to tackle climate change, but the transport infrastructure investments we’re making – such as this new interchange - will help leave a legacy of improved transport for future generations.”

“The new transport interchange is a key part of a wider transformation that will make Perry Barr one of the most connected places in Birmingham and the wider region.

“Not only will it provide a gateway for many visitors heading to the Alexander Stadium - it will also leave a lasting legacy for people in north Birmingham.

“We want to make these Games the greenest ever held and to help do that we need to make sure the easiest way to get around during Birmingham 2022 will be by public transport, cycling or walking. This will not only help cut carbon emissions and air pollution around our venues but also help keep everyone in the region moving next summer.”

The existing bus interchange is considered dated and inefficient with passengers having to cross traffic lanes to get to services and other local amenities.

“Next year, Birmingham and the wider region will be in the national and international spotlight during Birmingham 2022.

“To maximise on this once-in-a-lifetime opportunity, we have used our unique triple helix structure and worked with Birmingham City Council, businesses and academic institutions to invest in major infrastructure improvements.

“Our £1.6 million investment into the new Perry Barr bus interchange builds upon our £20 million investment into the fantastic new Alexander Stadium. The ambition is to give visitors the best experience of coming to this part of the city. Crucially, all these projects will leave a lasting legacy, ensuring that local people and businesses continue to benefit for years to come.”

The old Perry Barr rail station next door was regarded as one of the most unattractive in the region. Work is already underway on replacing it with a new, fully accessible, fit-for-purpose station including ticket office, toilets and baby change facilities, lifts and new stairs to the platforms.

Both the new station and the bus interchange are seen as critical for the Commonwealth Games because of their close proximity to Alexander Stadium which will host the opening and closing ceremonies as well as the athletics events.

The 12-day sporting festival, which runs between 28 July and 8 August, is expected to attract up to one million visitors and proposals to help make it the greenest Games ever held have already been drawn up, including a draft Commonwealth Games Transport Plan.

For events in the West Midlands, a Games ticket includes access to public transport in the local area on the day of the event. Full details will be available later in 2021.

Developed by TfWM, the draft transport plan has been drawn up in partnership with Birmingham 2022 and Birmingham City Council.