Public consultation on regeneration plans for central Birmingham to be launched 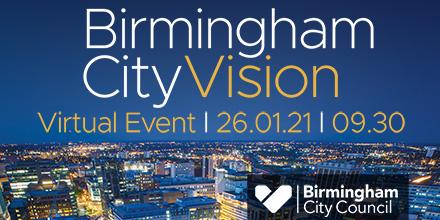 Businesses and communities across Birmingham are being called upon to help shape a bold new future for their city.

Birmingham City Council will be launching Our Future City Plan: Central Birmingham 2040, Shaping our City Together, which sets out its plans to help create a greener, more prosperous and fairer future for all across the city, on 26 January 2021.

This will be officially launched in partnership with Estates Gazette, who will facilitate an online panel discussion with stakeholder representatives from Birmingham Museums Trust, Moda Living, Savills and EVORA alongside members of the council’s planning team to help give further context around the plan’s aims and ambitions.

The impact of the COVID-19 pandemic, climate change and wider societal changes have prompted the launch of this project, which will replace the Big City Plan, launched in 2010, while taking recent challenges into account.

Using the council’s recent climate emergency declaration as a launchpad, the initial outline plan focuses on creating people-centred environments, opportunities for growth in emerging green industries, improving health and wellbeing through access to green spaces and making cycling and walking easier and safer.

The bold vision for Central Birmingham seeks to strengthen the links with the city centre and its integration with the surrounding inner city areas.

“As the main centre of development activity in our city over the last 30 years, investment in the city centre has provided jobs, homes, improvements to sustainable transport, new cultural destinations and educational opportunities.

“With the opportunities of HS2, expansion of the Midland Metro and the Commonwealth Games on the horizon, the city will continue to be a major regional, national hub and centre for international investment.

“This plan marks a major change from previous approaches to the city centre, with a clear intention to spread the benefits of development and investment into inner city areas, supporting access to infrastructure, jobs and improved public spaces.

“The release of an early engagement document such as this is intended to seek feedback from a wide spectrum of voices ranging from the individuals, organizations and communities to ensure all of Birmingham’s communities are shaping the city together.”

The launch event will be streamed via LinkedIn (EG) and Twitter (@EstatesGazette) and Estates Gazette website - www.egi.co.uk - on the 26 January at 9:30am

The Our Future City Plan: Central Birmingham 2040 Shaping our City Together consultation document, details of consultation events and activities that will be taking place can be found on Birmingham BeHeard from 26 January to 26 March 2021.

Feedback received will go on to inform the Our Future City Plan: Central Birmingham 2040 Draft Framework to be released in summer 2021 for further consultation.