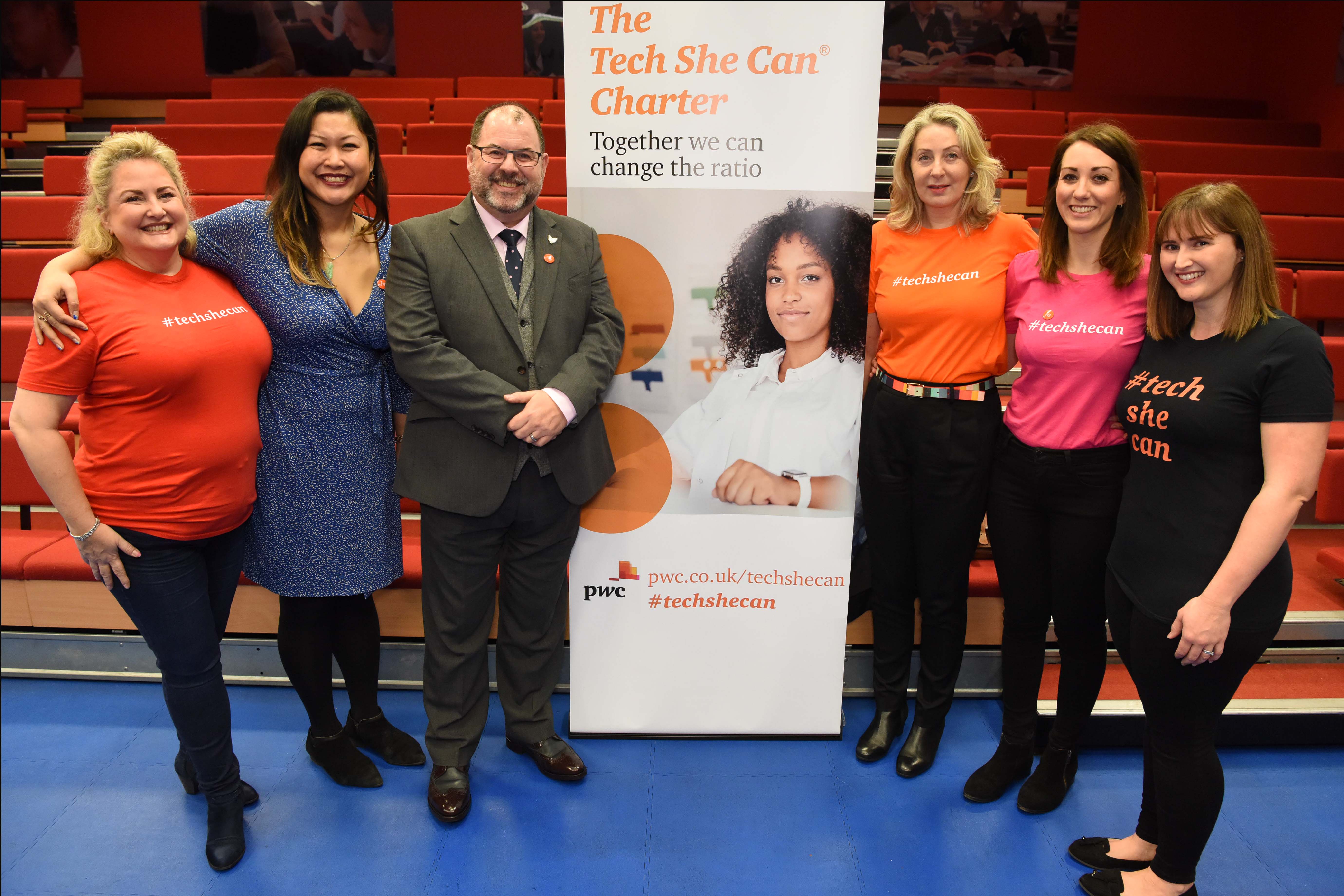 Five Coventry schools are the first in the UK to take part in a pilot to help encourage more young people to pursue technology-related careers - especially young girls to help close the gender gap.

Teachers from Lyng Hall School, Finham Primary School, Rugby Free School, Finham Park and Finham Park 2 are taking part in the Tech We Can programme - a series of lessons to help educate young people about technology and encourage them to consider careers in the industry.

The lesson programme has been put together by The Tech She Can Charter - a commitment by 78 organisations to work together to inspire and educate young people to choose science, technology, engineering and mathematics (STEM) subjects at GCSE and eventually tech careers. Tech She Can aims to create educational material that equally appeals to both boys and girls. It demonstrates the wide breadth and depth of tech roles, by highlighting real tech role models.

The Tech She Can Charter was created following research by PwC which surveyed over 2,000 A-Level and university students. The research shows that the gender gap in technology starts at school and carries on through every stage of girls’ and women’s lives. Only 27% of female students surveyed said they would consider a career in technology, compared to 61% of males, and only 3% confirmed it is their first choice.

On Monday 3 December we will see 13 teachers from the five pilot schools start their training at a ‘teach the teachers’ day held at Lyng Hall School. This session will prepare the teachers ahead of the trial starting in schools from January 2019.

Pupils aged 10-13 will receive six two-hour lessons based on tech for manufacturing and engineering, tech for fun, tech for communication, tech for education and tech for health and inclusion. The lessons are designed to be taught by all subject teachers and are mapped directly into the National Curriculum, whilst meeting six of the eight Gatsby Benchmarks, with the opportunity for students to gain a CREST bronze award.

"The staff at Lyng Hall are very excited to be part of the Tech We Can pilot. Technology plays a huge part in everyone’s lives today, so this is a great opportunity for us to make sure that what we are doing in schools is at the leading edge of what is possible.

"We recognise the importance of pupils, especially girls, seeing role models and being encouraged to choose STEM subjects and pursue tech careers. We're pleased to be working with colleagues across the five schools to work collaboratively to bring this exciting project to as many of our children as possible."

In February, the schools will give feedback and discuss how the lessons went, including whether they think the school children’s perceptions around a career in technology have changed, particularly the girls. The Tech She Can Charter group will use the feedback to shape the material to engage more schools in the programme for a second phase in Spring next year.

As part of its commitment to educate and inspire young people, PwC is one of the organisations committed to The Tech She Can Charter, which sees the organisations work together to increase the number of women working in technology roles. It aims to tackle the root cause of the problem at societal level by inspiring and educating young girls and women to get into tech careers and sharing best practice across the organisations involved.

Sheridan Ash, Women in Tech leader and Tech She Can Founder at PwC, said:

“This is an exciting progression in our commitment to inspire the next generation of people to get into tech careers. Our research shows the gender gap in tech-related careers begins quite early in education, so we hope that through this programme we can start to break down the barriers that prevent females achieving their ambitions, whilst at the same time attracting more males into tech. At a time when the lack of tech skills in the workforce is seen as one of the top three issues for CEOs, we need initiatives to tackle the overall low numbers of pupils that say tech is their first choice career, no matter what gender they are.

“I'm delighted to be working with the schools in Coventry, who are leading the way and helping us to further develop the programme. We’re really looking forward to seeing the progress of the pilot and how we can learn from this to reach out to more schools.”

The Tech We Can teaching programme launch comes in the same week that the West Midlands Digital Skills Partnership (DSP) launches in Coventry.

As part of the Tech She Can Charter’s work to influence policy they are working closely with the Department for Digital, Culture, Media and Sport on its DSP plans. Minister of State for Digital and the Creative Industries, Margot James MP, who also supports the Tech She Can Charter, will launch the third of six DSPs in the country, which is being run by the West Midlands Combined Authority, at the inaugural meeting on Thursday.

The partnership includes representatives from a number of local universities, colleges and businesses, alongside global tech giants such as Amazon and Cisco. It aims to link local people to training and opportunities in the region’s booming digital industry – a sector which grew by over 33% between 2011 and 2015 and could contribute £8.9bn to the West Midlands economy by 2030.

Cllr George Duggins, leader of Coventry City Council and portfolio holder for productivity and skills on the West Midlands Combined Authority (WMCA), which is supporting the pilot, said:

“It’s critical to the success of the West Midlands that technology and other sectors, like science and engineering, are at the heart of our future economy. So it’s important that local people have the skills needed to fill these jobs of the future, which is why I’m pleased this pilot is being launched today in Coventry.

“Technology is too often thought of as being male dominated so it’s great to see how Tech We Can aims to get more young girls to think about and go into tech-related careers.”