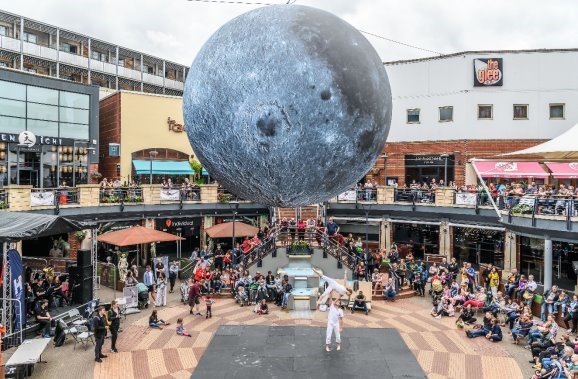 Celebrating 50 years since the first moon landing, Birmingham Hippodrome’s annual free family festival Summer in Southside saw a record attendance of over 37,000 people, up from 11,700 the year before.

The festival expanded across new sites covering Birmingham Hippodrome, the Arcadian and Bullring shopping centre, transforming them into a lunar landscape, with a host of performances and activities from local and international artists, exploring the wonder and spectacle of Outer Space.

Summer in Southside was held from Friday 12 – Sunday 14 July and Royal Birmingham Conservatoire’s sci-fi tunes opened the festival on the Saturday, creating an astronomical atmosphere. Hippodrome Associate Company Motionhouse performed their remarkable dance piece Gravity under Luke Jerram’s stunning Museum of the Moon; a spectacular seven meter model with detailed NASA imagery of the lunar surface which hung over the Arcadian square.

Festival-goers were wowed by Highly Sprung’s Urban Astronaut, a walkabout physical performance featuring an astronaut suspended 20 feet in the air, and saw an asteroid crash land in Southside with scientific police exploring the aftermath, with a UK premiere of Campi Qui Pugui’s Asteroid. Other international artists who joined the festival included Slovenian company Ljud, with their performance The Invasion which roamed across Southside and Bullring & Grand Central telling the story of intergalactic immigrants, and Close Act i-puppets from the Netherlands.

Festival-goers experienced a gravity defying sensory illusion in the Astronaut’s Caravan and elsewhere over the weekend, Birmingham Hippodrome teamed up with Bullring & Grand Central for Summer in the City as part of Summer in Southside. Visitors to the shopping centre enjoyed a variety of performances in Rotunda Square, including The Dream Engine’s Heliosphere; a spectacular performance with an acrobat suspended beneath a helium balloon, and Silent Rocco’s Lostronaut; a stunning interactive mime performance.

Attendees seeking a more tranquil experience relaxed on beanbags by the iconic Bull with Gobbledegook Theatre’s Cloudscapes, which transformed an urban space into a cloudgazing area.

On Saturday afternoon, crowds sang happy birthday to Birmingham Hippodrome under the moon as part of the venue’s 120th birthday celebrations, with a celebratory cake shared with festival-goers.

Alongside the many performances, festival goers were able to enjoy a range of free space age arts and crafts and The Hippodrome Education Network (HEN) schools also performed two space-inspired pieces.

“Summer in Southside is a real highlight for the team here and it was a fantastic weekend seeing so many families join us to celebrate 50 years since the first moon landing.

"For the first year we expanded activity further across the city working with Bullring & Grand Central to make the festival bigger than ever before, and we’re already planning to make next year’s event our most spectacular yet”.

“We had a fantastic weekend hosting Summer in the City as part of the Summer in Southside event. Our visitors were amazed by the Heliosphere performance, which took place in Rotunda Square alongside the iconic Rotunda building, and enjoyed interacting with the various performances that roamed the centre including Silent Rocco’s Lostronaut and the Close Act iPuppets.

“The event certainly brought the whole city to life in celebration of the Moon Landings’ 50th anniversary and we were thrilled to be a destination.”

Summer in Southside, a Birmingham Hippodrome Project was supported by Arts Council England, Global Streets, Without Walls and sponsored by Southside BID, The Arcadian and Darwin Escapes.

For more information about Summer in Southside, please click here.