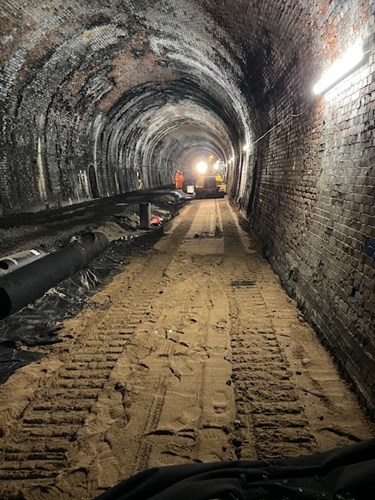 The images show track on the ground in a currently disused tunnel which runs between Castle Gate and Cinder Bank.

The line, which is being laid along a disused rail track, will be two kilometres long when complete and be used as a test track for VLR. A test passenger platform will be located at Cinder Bank at the end of the track.

It comes as work is already well under way to construct the VLR National Innovation Centre at the old Dudley Train Station in Castle Hill.

The centre will boast a triple-height engineering hall, research laboratories, conference and seminar rooms and offices for 45 people. There will also be public areas, including exhibition spaces and an auditorium.

The whole project is expected to be complete in early 2022. It will put the borough at the national forefront of new rail technology looking for cheaper and more efficient alternative to heavy rail and tram transport.

"It is fantastic to see this ground-breaking project moving forward at pace.
Seeing the first sections of track laid are a real symbol of the positive developments on the way in our borough.

This facility and the VLR test track will place Dudley at the forefront nationally of game-changing works in the rail industry. They will benefit the economy as well as the environment.

We are forging an exciting and bright future for Dudley town centre, with a billion pounds worth of regeneration works including this and the Metro coming very soon. It’s exciting times."

"It gives me great pride to see the first sections of track laid down, following on from the excellent progress being made in building the innovation centre.

This project will help to create jobs and put Dudley on the national map once again for innovation, technology and manufacturing.

The recently formed Black Country Innovative Manufacturing Organisation (BCIMO) will oversee the launch and operation of the centre."

"I’m looking forward to the test track coming into use in February 2021, when we will commence testing of the Coventry VLR shuttle vehicle."

The project is funded by the government and the Black Country Local Enterprise Partnership (LEP).

Construction work is being undertaken by Clegg Construction and the whole project is expected to be completed by Spring 2022.