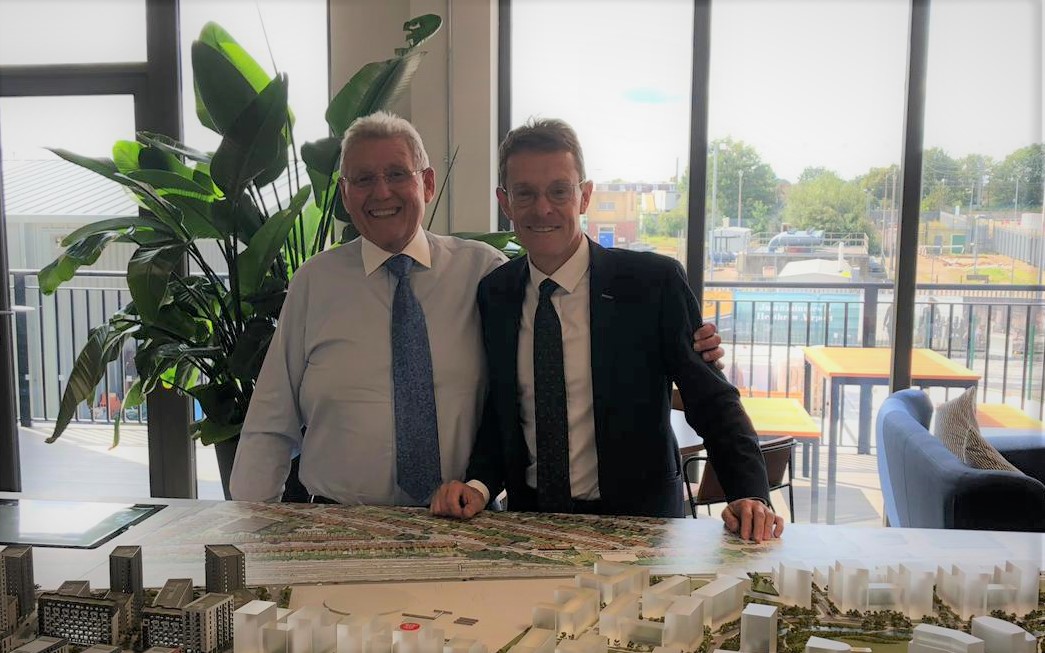 The Mayor of the West Midlands has led a fact-finding mission to a construction academy as part of the development of a new national centre for construction excellence in the Black Country.

Andy Street visited the Berkeley Group’s West London Construction Academy, in Southall, to understand how the Academy has worked in partnership with the industry to respond to skills development challenges facing the construction sector.

He was particularly interested in how the challenges for the construction industry could be further addressed by the ambition to establish the West Midlands as the world leader in state-of-the-art construction, based around a proposed National Centre for Construction and Development Excellence at the University of Wolverhampton’s Springfield Campus.

Mr Street, the former CEO of John Lewis, visited the London construction academy with Tony Pidgley CBE, the founder and chairman of housebuilder Berkeley Group, which set up the academy.

“The Black Country and its coal was at the forefront of the industrial revolution in the 1800s. Now, in the 21st century, it is time the region reclaimed its place as a world leader in construction.

“By establishing this centre in the Black Country we will be doing just that, with students able to learn state-of-the-art construction techniques and apply them to derelict brownfield sites across the region. Soon our workers will be in demand across the world, remediating polluted sites and building skyscrapers.

“But this will only work if our proposed National Centre for Construction and Development Excellence is truly world class. To make that happen it is crucial we do our homework first, which is why I visited the highly-regarded West London Construction Academy to see how they are tackling the skills challenge facing the construction sector.

“It was a very beneficial visit, and I cannot wait to see our national centre start to take shape.”

The proposed National Centre for Construction and Development Excellence will be part of the University of Wolverhampton’s £100 million investment in a construction super-campus at the former Springfield Brewery incorporating the West Midlands Construction University Technical College and the Elite Centre for Manufacturing Skills Hub as well as the new School of Architecture and Built Environment and the proposed National Brownfield Institute.

The exact plans for the new centre are under development but once established it will ensure that the West Midlands is at the forefront of modern construction, creating high skilled jobs that contribute to sustainable development and help the region meet its target of 215,000 new homes by 2031.

Professor Geoff Layer, Vice-Chancellor of the University of Wolverhampton, said:

“Our vision for Springfield is that it becomes a hub for excellence in construction and the built environment on a national and even international scale.

“There is a huge amount of brownfield land across the Black Country and wider West Midlands and we are looking forward to helping play an integral role in identifying and unlocking that land’s potential for regeneration and in particular supporting ways to address the housing shortage.

“Springfield itself is a perfect example of how brownfield land can be transformed and regenerated supporting jobs and the regional economy.”

“The development at the university’s Springfield Campus will make it an internationally significant centre of excellence for the construction industry - and is a major game-changer for our city.

“At a time when the need has never been greater for skilled workers in the construction sector we will have an asset in our city that will boost skills and jobs for people across the city, region and internationally.

“This development takes the city to the next level by making it a UK urban innovation hub.

“We will become the go-to city for expertise in getting more former industrial land ready for development and raise the skills bar in this sector.

“We’re working closely with colleagues at the university and West Midlands Combined Authority (WMCA) to develop this campus and ensure this part of the city benefits from the £4.4 billion of investment on site or planned in Wolverhampton.

“The council’s announcement of the major residential development, The Brewers Yard, on brownfield land neighbouring Springfield Campus, will also provide hundreds of construction jobs for people.”