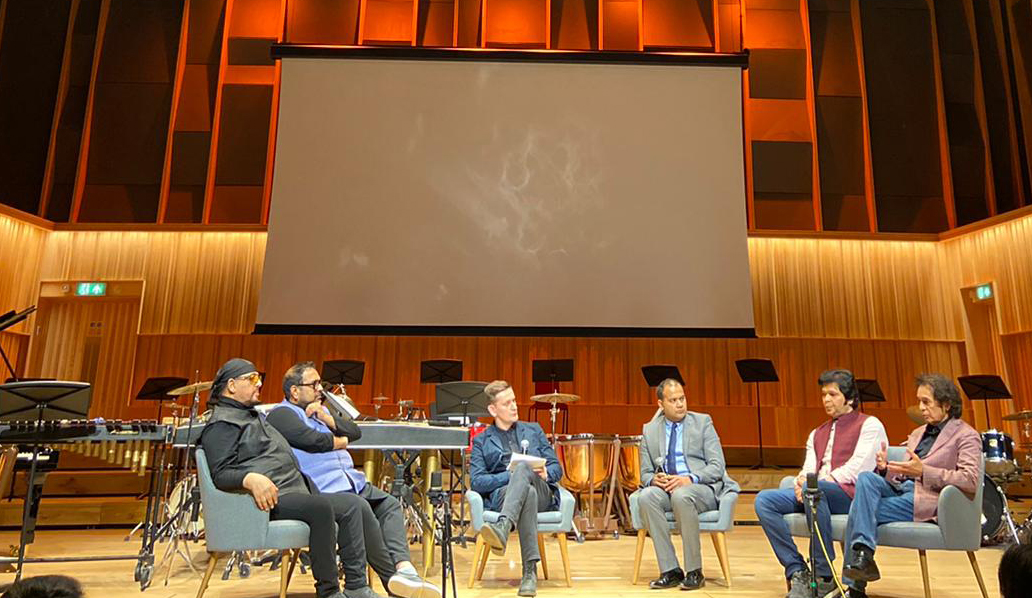 Ties between British and Indian musicians were boosted this week with a visit by four classical music superstars to Royal Birmingham Conservatoire - who told the audience that ‘music has the power to change your life in a way you couldn’t even imagine’.

The visit, organised by BCU India and West Midlands India Partnership, saw the artists – who are known to hundreds of millions of fans in their home country and across the globe – share advice and stories with a captivated audience in the Conservatoire’s Bradshaw Hall, before enjoying performances from RBC percussion and brass students.

Musical links between the UK and India were explored between the VIPs and senior leaders of the University, and the artists – who perform at Symphony Hall Birmingham tonight, Friday 11 February – posed for photos with first and second year music students on stage after the event.

Shyam Nabar, Director of the West Midlands India Partnership, part of the team who organised the visit, said:

"We will continue to connect our board members with esteemed organisations in India as a part of our strategy to enhance relations as we celebrate the Birmingham 2022 Commonwealth Games and ‘India at 75’ this year."

Zakir Hussain, who alongside his late father Ustad Alla Rakha was largely responsible for popularising the tabla with Western audiences throughout the 1970s and 1980s, is a virtuoso musician who gave his first concert at the age of seven and was touring with the late sitar maestro Ravi Shankar in the US at 11 years old.

The musician has also recorded and performed with many notable Western musicians including George Harrison, Van Morrison, Mickey Hart of the Grateful Dead, Herbie Hancock, and John McLaughlin in the great acoustic group Shakti.

As a composer, Zakir Hussain has scored music for numerous feature films, major events and productions. He has composed three concertos, and his third, the first-ever concerto for tabla and orchestra, was premiered in India in September, 2015.

“It was such a great experience to finally meet the Zakir Hussain. As a child I use to read about him in our general knowledge book. Being Kirtania – a person who sings holy hymns and who plays a traditional string instrument, it was very inspiring to meet and have a conversation with the best tabla player on the planet.”