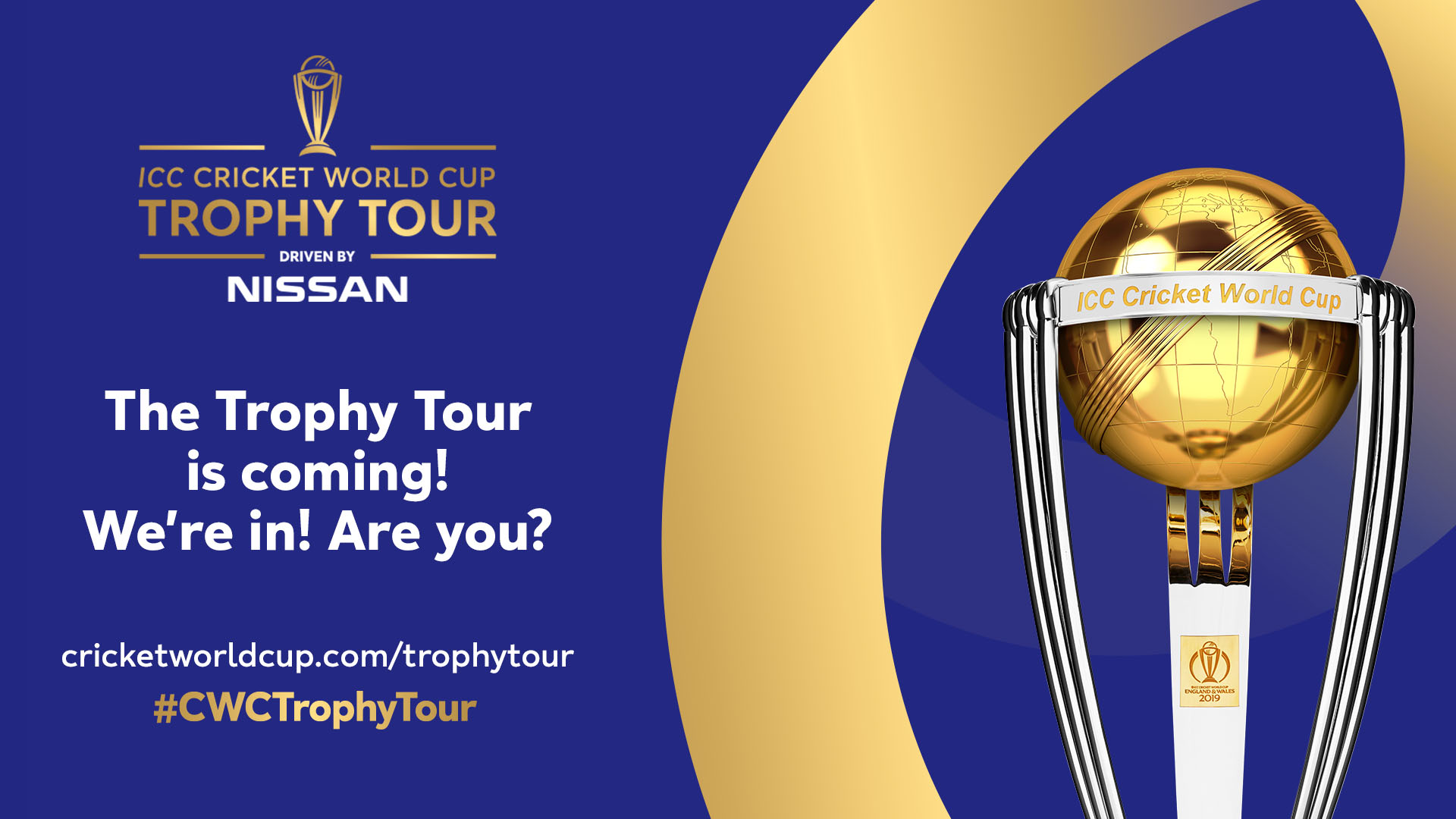 The 100-day schedule for the domestic leg of the ICC Cricket World Cup Trophy Tour, driven by Nissan, has been announced today ahead of its start date on 19 February - when it will commence its journey across the length and breadth of England and Wales, covering thousands of miles and making stops in more than 20 towns and cities.

The trophy, which will be lifted by the ICC Men’s Cricket World Cup winners at Lord’s on 14 July, will be driven around England and Wales in a Nissan LEAF – Europe’s top-selling electric vehicle (EV)*-  making this tour the first ICC Trophy Tour powered by an all-electric vehicle.

From extreme sports and a cricket match underground to a theme park and a quintessential English village, the trophy is set for some unique visits during its time on tour, with its final stop on 29 May the day before the tournament opener of England v South Africa at The Oval.

Thousands of fans have already had the chance to catch a glimpse of the trophy during the international leg of the tour, with cricketing legends such as Brian Lara, Tillakaratne Dilshan and VVS Laxman - just to name a few - visiting it along the way. The trophy has made stops at each of the ICC Men’s Cricket World Cup 2019 participating nations, with additional visits to countries in Europe and Africa, and as far as Nepal and the USA. By the time the Trophy Tour reaches England and Wales, it will have visited 18 countries worldwide.

While supporting the development of grassroots cricket by visiting every first-class county, the Trophy Tour also aims to take cricket to new areas with stops at other towns and cities across England and Wales. The 100-day route showcases an array of different communities and celebrates multi-cultural Britain at its finest.

There will be a number of open events throughout the tour where fans will get the opportunity to get close to the trophy, including three ‘Super Saturdays’ in Manchester, Birmingham and Bristol. These will combine music, special guests, entertainment and a street cricket tournament involving local businesses, fan groups and the public.

The ICC will be offering the chance for three lucky fans to get a personal visit from the trophy during the tour. Members of the public can nominate someone who they feel deserves to be recognised for their contribution to cricket and the wider community to win a visit from the trophy. More details can be found here.

The full #CWCTrophyTour schedule, driven by Nissan, can be viewed here.

“Today is another huge milestone in our journey to the Cricket World Cup, as we announce the 100-day Trophy Tour across England and Wales.

“We have seen an incredible response from supporters as it’s made its way around the world, visiting communities across numerous countries.

“The countdown to the tournament will feel very real when the trophy arrives in England and Wales, and we look forward to it visiting some iconic and special locations before the opening match on 30 May.

“We’d also like to thank Nissan for all their commitment in delivering the Trophy Tour, it would not be possible without their help and support.”

“The arrival of the Trophy Tour to these shores really does bring home how close we are to the event getting underway. I hope the visit of the Trophy to our city will inspire people to engage with the tournament, the latest in a long line of world-class sporting events to come to Birmingham.”

“We’re delighted to be part of the first ICC Cricket World Cup Trophy Tour driven by an all-electric vehicle – Europe’s best-selling in fact* - the Nissan LEAF.

“As our hero electric vehicle - LEAF embodies energy, passion and excitement – all the components needed for a successful Cricket World Cup! We can’t wait to show off its Nissan Intelligent Mobility credentials as we take it for a ‘spin’ across the nation and get fans excited about electric mobility.”