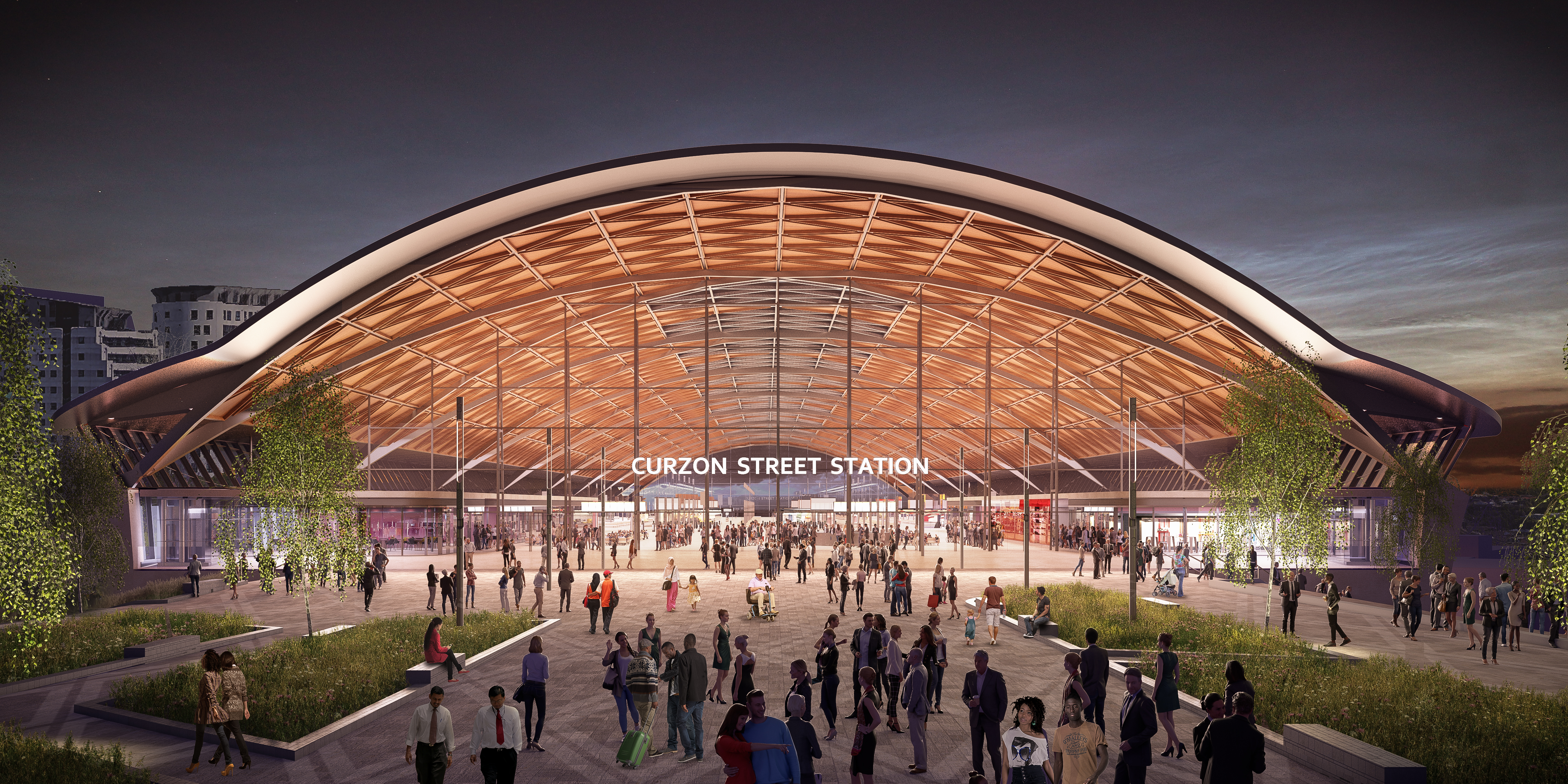 HS2 has begun the search for the construction team that will take the new Curzon Street station from concept to reality, and put Birmingham firmly at the heart of the HS2 network.

The arrival of HS2 in 2026 is expected to help transform the city centre and unlock up to 36,000 jobs and 4,000 new homes across Birmingham. HS2’s early works contractors are already on site, preparing the ground for the start of construction.

The vision for the station includes a huge arched roof inspired by the city’s transport and industrial heritage. The latest images of the proposed designs, by WSP, working with Grimshaw Architects and Glenn Howells, were unveiled last month as part of a series of regional community engagement events.

Putting people at the centre of the design, the station will be designed to offer seamless connections to the West Midlands Metro as well as local rail services via the neighbouring Moor Street station and bus, taxi, cycle and pedestrian access to the wider region.

Work is also underway to restore and reopen the original Curzon Street Station building, the only surviving part of the original 1838 station, as a visitor and heritage centre.

“HS2 is already unlocking new opportunities to create skilled jobs across the West Midlands and, over the next decade, the winner of the Curzon Street contract will go on to build one of the most exciting and high profile elements of the project.

“We’re looking for the best the construction industry has to offer. Companies that share our commitment to safety, good design, environmental protection and value for money. Together we will deliver an iconic new gateway to Birmingham - a building the city, the wider region and the travelling public can be proud to call their own.”

“Birmingham is central to HS2, and the transformation that is already taking place shows exactly how our new high-speed railway will drive forward regeneration and economic growth across the country.

“Curzon Street station will be the perfect gateway to Birmingham and will live long in the memories of visitors boosting business and tourism in the city.”

“The start of this procurement process is a hugely significant step forward towards building what will be one of the real showpieces of the entire HS2 network here in Birmingham.

“However, what I think makes HS2 really exciting is the jobs, homes and opportunities it will bring to our city, leaving a legacy that I hope will benefit generations to come.”

“The start of the procurement process for a new station at Birmingham Curzon Street is a fantastic opportunity for industry and a boon for the entire region.

“CECA believes HS2 will be fundamental to the rebalancing of the economy and will drive growth, create jobs, and be transformational in closing the capacity gap on the UK’s railways.

“HS2 will be central to the diverse portfolio of transport infrastructure the UK will rely upon in coming years, and the initiation of procurement for a new station at Birmingham Curzon Street should be seen as a major milestone towards the delivery of this once-in-a-generation project.”

Separate contractors, appointed last year, will build the tunnels and viaducts that will carry the new 360km/h trains into the centre of Birmingham and to the Interchange station near Solihull, the NEC and Birmingham Airport.

HS2 services will eventually connect over 25 destinations and 30 million people across the UK. Trains will serve existing city centre stations in places like Glasgow and Newcastle, as well as brand new purpose built stations in Birmingham, Manchester, Leeds, and the East Midlands.

For Curzon Street, bidders are expected to be shortlisted in the spring, with contracts awarded in 2020. Separate construction contracts for Birmingham Interchange will follow next year.