Goldman Sachs to take space with WeWork in Birmingham 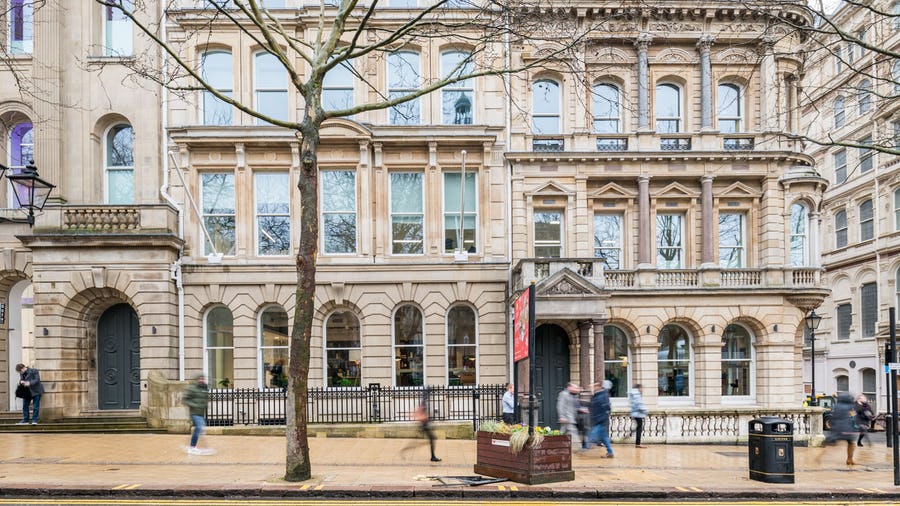 Goldman Sachs has signed a membership agreement for one floor at WeWork 55 Colmore Row in Birmingham. The agreement is for a term of two years with an option to take additional space if required. Employees are expected to be on site at the Colmore Row office by September 2021.

Goldman Sachs announced in April its intention to establish an office in Birmingham, with a potential headcount of several hundred over the coming years, led by its Engineering division. The firm intends to move to a permanent leased office in the future.

WeWork 55 Colmore Row covers three of the six floors in the building totalling 73,166 sq ft. On site amenities include a barista bar, new parents' room, bike storage, and showers for those who like to cycle into work or attend a fitness class at lunchtime.

The beautiful Grade II listed building is light filled, spacious and makes an impactful first impression with thoughtful design that blends the building's historic features such as the arch windows with modern influences like the modern glass atrium.

WeWork 55 Colmore Row is designed to foster collaboration and productivity, and the artwork featured in the building pays homage to the city, for example the Neon 'handshake' artwork demonstrates Birmingham's multicultural community, and the neon 'chimney' artwork makes reference to the city's industrial heritage.

It is in a prime location near Birmingham Snow Hill station, and a short distance from Birmingham New Street Station and Birmingham Moor Street Station as well as the city centre. It also benefits from the best of the city's amenities, with gyms, restaurants and bars nearby.

“We’re delighted to welcome Goldman Sachs to the heart of the region’s financial district. Birmingham is ripe for future growth in technology, perfectly complementing the bank’s ambitions to recruit the very best talent. As the city gears up to host the Birmingham 2022 Commonwealth Games next year, Goldman Sachs’ arrival will coincide with the region’s escalated status as an internationally significant cultural destination.”

“We are delighted to be taking space in this world-class office. The central location, amenities and workspace geared towards collaboration and flexibility will provide the ideal setting for our newly established presence in Birmingham and springboard for our ambitions in the city. We are already attracting great talent to join us in the Birmingham office and are excited to build on the entrepreneurial culture of Goldman Sachs in this new office.”

“We’re thrilled to be partnering with Goldman Sachs to establish their presence in Birmingham. We’re seeing increasing demand from companies across the financial services sector who are recognising the benefits of scalable, flexible space in creating engaging, collaborative workspaces for today's increasingly hybrid working environment. Goldman Sachs is leading the way in embracing a forward thinking workplace strategy defined by flexibility and collaboration that complements their plans for growth and innovation alongside their talent attraction and retention needs."