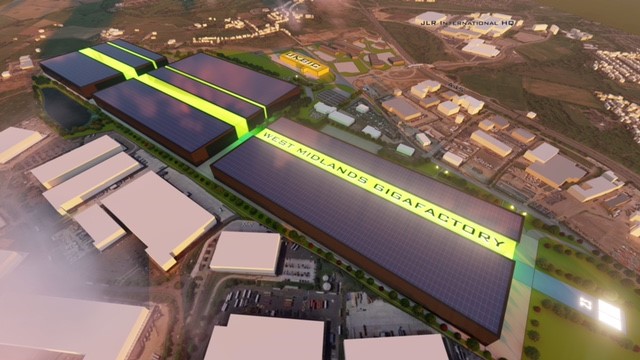 The public-private partnership represents a game-changing initiative in the UK’s pursuit of a Gigafactory, and further strengthens the West Midlands’ attraction for battery suppliers.

The Joint Venture partners will develop proposals and submit an outline planning application for a Gigafactory in 2021. This will take place alongside regional discussions with battery suppliers and automotive manufacturers to secure the long-term investment needed.

The approach will significantly improve the attractiveness of the West Midlands as a destination for investment, whilst drastically reducing the time needed for a Gigafactory to become operational.

The West Midlands is already the heart of the UK automotive sector, and home to several automotive manufacturers, including Jaguar Land Rover, Aston Martin Lagonda, BMW, LEVC and others.

Securing a Gigafactory in the West Midlands has been identified as vital for the continued success of the automotive industry, creating thousands of green jobs, attracting up to £2bn of investment, and supporting the drive for Net Zero.

The UK Government is actively pursuing investment in a Gigafactory and has made up to £500m funding available, which the West Midlands will be bidding for in due course.

The West Midlands Combined Authority, which is led by the West Midlands Mayor and comprises the region’s seven urban councils, has formally endorsed Coventry Airport as the preferred site for a Gigafactory. The Airport site could accommodate up to 4.5m sq ft of commercial space, making use of the large areas of hard standing and existing development.

“As the global transition to zero-emission transport gathers momentum, we must ensure the UK remains an attractive place for the automotive supply chain.

“Carmakers around the world are racing to switch production from internal combustion engines towards electric cars with zero exhaust emissions, and our international competitors are moving quickly to accommodate their needs. If we are to safeguard existing automotive jobs and attract new investment in the era of electric vehicles, the UK needs to double down efforts to scale its battery production capabilities at pace.

“The West Midlands is offering a solution to this challenge. This region, which is responsible for a third of the country’s car production and already the UK centre for battery research, is the obvious location for a Gigafactory.

“Not only is the region home to the UK Battery Industrialisation Centre (UKBIC) - the country’s only facility for large-scale battery R&D – it is leading-edge in energy storage, smart grid infrastructure and circular solutions in battery lifecycle. The West Midlands’ unique ability to drive innovation across this whole supply chain, coupled with its portfolio of automotive heavyweights, makes it globally significant and the optimum location for a Gigafactory.

“We fully support Coventry City Council’s joint proposal with Coventry Airport Ltd, which, puts the region in a strong position to secure battery suppliers and support existing employment-critical companies including Jaguar Land Rover, Changan and LEVC. It is a bold example of a catalytic West Midlands-led public-private partnership, from which the UK in its entirety has much to gain”.

“Coventry has emerged as a world leader in battery technology. The city is home to the UK Battery Industrialisation Centre, world-leading research institutions, and the UK’s largest car maker Jaguar Land Rover and it’s clear to me that Coventry is the right location.

“Coventry Airport sits at the heart of this powerful automotive research cluster and is the obvious location for a UK Gigafactory. It will immediately plug in to a mature automotive supply chain and skills eco-system. The green industrial revolution is coming, and I will continue to work tirelessly to ensure that Coventry is right at the heart of it. We have the site, the skills and the pedigree to make this work.

“Our Joint Venture partnership is unique in the UK and creates a strong platform to attract investment and deliver more than 4,000 new jobs, support our automotive sector, and secure our competitive advantage.”

“I have been utterly obsessed with securing a Gigafactory for the West Midlands due to the huge economic and job benefits it would bring, and so I am delighted we have announced our preferred site and taken a huge leap forward today.

“The point I have been ferociously lobbying to Government is that the West Midlands is the natural place for a UK Gigafactory as we are already home to the country’s biggest car manufacturer, Europe’s largest research centre, the UK’s only battery industrialisation centre, and a world-leading supply chain.

“By announcing the site now and driving forward with a planning application and a joint venture, we are showing how united and serious the region is about making this happen.

“The next step is to submit the case to Government to win the funding required, and discussions are already well underway with the UK’s leading car makers and battery suppliers across the globe to put together the strongest bid possible. I will not rest until the West Midlands has the Gigafactory it needs.”

“We recognise what a significant opportunity this is and are backing the project with investment alongside our public sector partners. This is a ground-breaking initiative, and we are excited to be a part of it.”

“Coventry and Warwickshire has worked incredibly hard over recent years to ensure the region is an attractive destination for investment, particularly in automotive and battery manufacturing, allying our engineering heritage and capability with our cutting-edge research.

“Since securing the UK Battery Industrialisation Centre in 2017, our capability in battery technology has gone from strength to strength. The Joint Venture between Coventry City Council and Coventry Airport Ltd will continue to establish our region as the obvious location for a UK Gigafactory.”

“As a key partner in the Coventry and Warwickshire Local Enterprise Partnership, Warwick District Council has been supportive of the efforts to ensure that the sub-region is an attractive destination for investment, particularly in automotive and battery manufacturing.  In relation to the site now being proposed, Coventry Airport is within the Warwick District Council area and as the Strategic Local Planning Authority, this Council will ensure that the planning application is considered rigorously, meticulously and diligently, as is every application submitted to us.

“We have already begun work with the Joint Venture partners to ensure that the application they ultimately submit recognises and mitigates the potential impacts of these proposals.”