Home / News / Future in the Making

Future in the Making 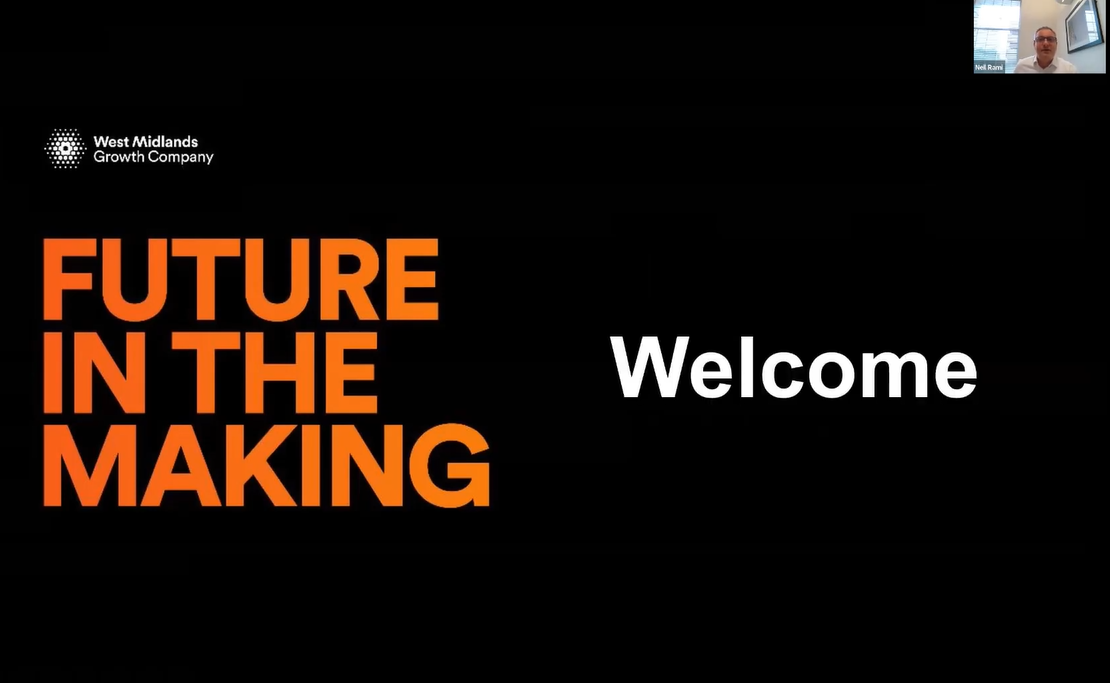 “We need to sing as one voice, altogether, loudly, harmoniously and engagingly because we’ve got a show to put on” were the words from the West Midlands Growth Company’s (WMGC) Vice-Chair Liz McKenzie at the organisation’s Future in the Making Partner Symposium (17th June).

The words echoed the sense of enormous opportunities brimming from the West Midlands as the region gears up for the next chapter after the worst of the COVID-19 pandemic.

Future in the Making

Despite the huge economic impact from the pandemic, WMGC continues to deliver on its promise to create jobs, investment and visitors. The Company’s Annual Review document “Future in the Making” compiles WMGC’s successes, achievements and future plans from the past year and will be released to partners and stakeholders in the coming weeks.

Setting the scene for delegates, Neil Rami presented an overview of the past year, which included:

Neil Rami reinforced how “despite the challenges, we are performing very well in terms of attracting investment”, taking the opportunity to showcase some of the recent success stories.

Some 38 investment projects were landed in the West Midlands in 2020, helping to create more than 2,260 jobs. It was also encouraging to note that almost two-thirds (68%) of the investment was from international companies, showing that WMGC is still landing the message of being a region that is “open for business”.

Another interesting investment trend has been a surge in tech and creative businesses and projects choosing the West Midlands, showing how strong the region’s sector ecosystem is becoming.

Over the past year, the West Midlands has also secured a number of high-profile private sector moves to the region, they include:

“We’ve trailed for some time the importance of moving public sector decision makers out of London”, Neil commented, as he detailed WMGC’s fantastic work in bringing at least 500 jobs to the region as the Ministry of Housing, Communities and Local Government announced its plans to create a second headquarters in Wolverhampton.

Furthermore, the Department for Transport will create a second HQ in Birmingham, relocating an initial 650 job roles to Birmingham and Leeds by 2025.

In Coventry, Homes England had already set-up a base in 2019, which now means the three cities of the West Midlands will each have representation from at least one governmental department – a crucial part of the UK Government’s ‘levelling-up’ agenda.

It is no secret that the tourism industry has been affected the most by the pandemic both domestically and globally. The full impact of the crisis is yet to be fully quantified, however the UNWTO predicted that 120 million jobs are at risk, with economic damage likely to exceed over $1 trillion across the world.

Like many other regions across the UK and the world, the West Midlands’ business and leisure tourism sectors are crucial to its economy with the sector generating more than £13 billion and supporting over 137,000 jobs.

To help the region’s tourism industry and its commercial partner network, WMGC played an active role in lobbying government for financial support and other resources. More practically, the Growth Company supported partners by highlighting their digital experiences across its channels.

A key highlights for WMGC was working with in collaboration with the West Midlands Combined Authority’s Culture Response Unit to live stream Midsummer, a collection of three online festivals, across the Visit Birmingham and MakeitWM websites. The festival was a huge success drawing more than 25,000 virtual visitors to the region.

Recent reports from Irwin Mitchell and PwC support that, although the West Midlands has been hardest hit by the pandemic, it will also be one of the region’s to recover the fastest.

The region’s unique global events calendar has been recognised as a major catalyst for this resurgence. Starting with Coventry UK City of Culture this year, the city and the wider region will be in the spotlight like never before, with a huge arts and culture programme that will change perceptions of the “City of Three Spires”.

This sentiment was echoed by Neil during his opening remarks, “the Coventry UK City of Culture is very exciting, not just for the people of Coventry, but for this region. The event will help us to tell our story across the world.”

The momentum continues into 2022, when the West Midlands will be thrust into the spotlight once again with the Commonwealth Games coming to Birmingham and the wider region.

The Games creates a once-in-generation opportunity, that WMGC “are determined to make the most of, not just as a fantastic 11 days of sport, but also to leverage in terms of trade, tourism and investment”, Neil explained.

To capitalise on this huge opportunity, the UK Government and WMCA announced a joint investment of £24 million for WMGC to develop “the largest sales and marketing programme the West Midlands has had at its disposal for a generation”.

Delivered in partnership with the Birmingham 2022 Commonwealth Games, DIT, DCMS, Visit Britain and the West Midlands Combined Authority, the programme will deliver a significant uplift in tourism, trade and investment.

By utilising the profile of the Games and the events that come with it, the region will be targeting five key market areas, India, Canada, Australia, Singapore and Malaysia, with sustained activity pre, during and post Games.

To showcase the positivity, opportunity and expectation of the Birmingham 2022 Commonwealth Games, Neil shared a short video clip with delegates.

In preparation for the £24 million Business and Tourism Programme, WMGC have spent the last four months compiling a fresh iteration of the West Midlands’ investment focused sectoral narrative.

The narrative will underpin the inward investment campaign of the Business and Tourism Programme, ensuring that we are hyper-focused on the strengths, differentiators and opportunities within the region’s key sectors: data-driven healthcare, tech & creative, professional & financial services, industrial and low carbon.

Find a full report on the discussion here.

A word from Goldman Sachs

After the panel discussion, Matt Hammond was joined by special guest Gurjit Jagpal, Managing Director of Goldman Sachs (Head of Birmingham Office) who discussed the US banking giant’s recent choice to create a new office in the West Midlands.

The move will bring several hundred jobs to the region with engineering being the first division to build out in Birmingham.

A thank you to our partners

WMGC’s Commercial Partner network has been a crucial foundation to what has been a tough, but successful year for the company.

WMGC Chair Matt Hammond signed off the session by perfectly encapsulating the Company’s gratitude for its partners’ cooperation and collaboration over the past year, by saying:

“As commercial partners, the fact that you’ve stood by the Growth Company through the last 15 months is really appreciated. It would be an easy time to look into your own businesses and go into self-protection mode – it has been absolutely critical to the success of the region that you were with us through that period.”

If you are an organisation that would like to benefit from the growth of the West Midlands, please email sian.roberts@wmgrowth.com.

Businesses that are part of our commercial partner network are able to expand their networks with exclusive invites to events like Future in the Making, get access to important research and insights and gain increased exposure to their target markets.