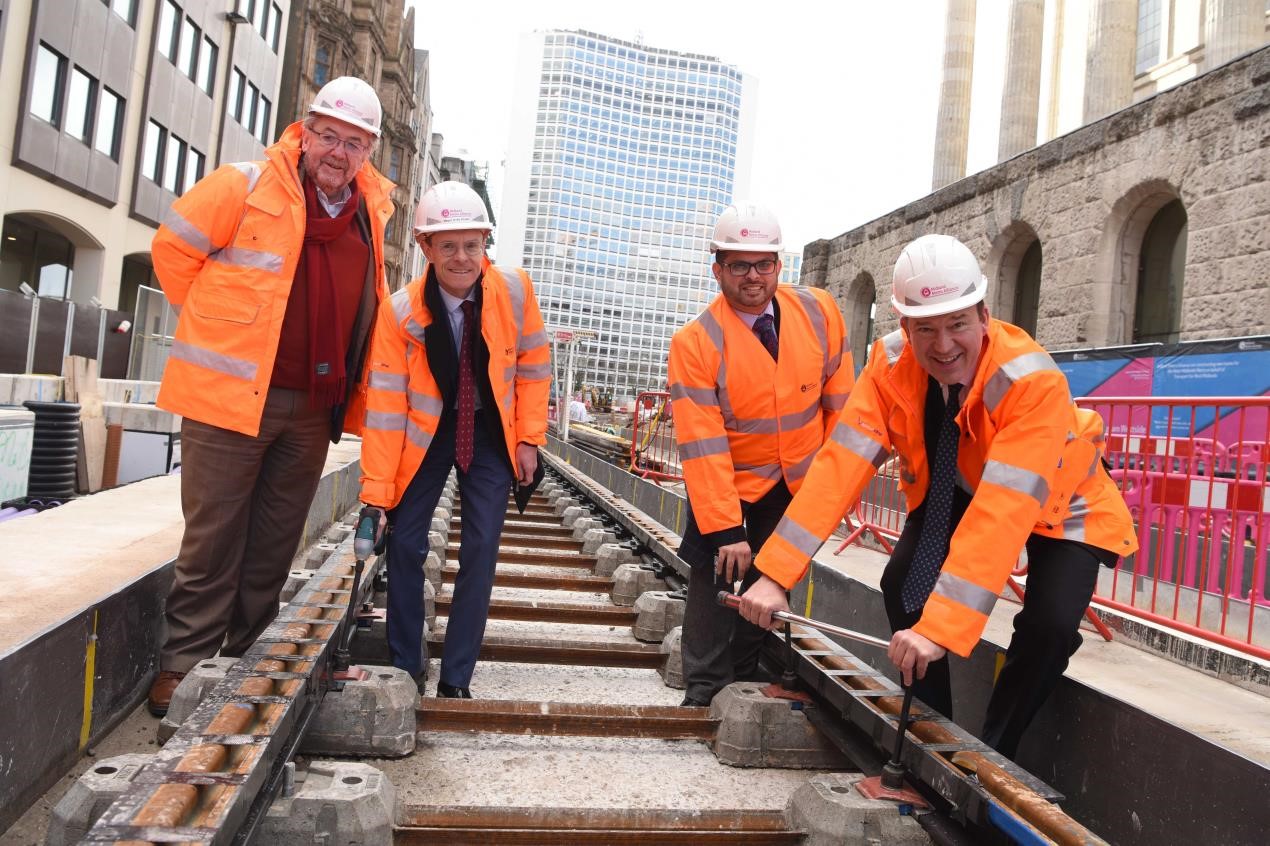 Tram tracks are now being laid in Birmingham city centre in a clear sign that construction of the West Midlands Metro extension to Centenary Square is continuing at pace and on schedule.

Transport Minister Jesse Norman MP was the special guest to mark the laying of the first tracks for the Westside tram extension.

This key milestone in the construction of the £70 million extension from Grand Central to Centenary Square was also celebrated by Mayor of the West Midlands Andy Street and regional transport chiefs.

The 2km Westside extension is being developed in two phases by the Midland Metro Alliance partnership on behalf of the West Midlands Combined Authority (WMCA).

The first, between Grand Central and Centenary Square is due to open by the end of 2019. The second phase will take passengers along Broad Street to Edgbaston Five Ways and will be operational by the end of 2021.

The new services will carry visitors and commuters to key destinations and attractions including Birmingham Museum and Art Gallery, the new HSBC headquarters, the Arena Central and Paradise regeneration sites, Brindleyplace, Symphony Hall and the Town Hall.

This light rail project part of a wider £1.35 billion expansion of the region’s tram network over the coming decade, with new lines serving Birmingham, the Black Country and Solihull.

“The West Midlands Metro network shows how government support can help to create a sustainable, accessible and innovative light rail system, which forms an integral part of a modern urban transport network.

“This is a great time to explore the incredible potential for light rail schemes across the country.

“Today's wide-ranging Call for Evidence seeks new ideas and new support for the next generation of light rail, so that we make existing systems work better, and can work with cities and towns across the UK to create new ones.”

These are the first trams tracks to be installed in the city centre since 2015 when the extension from Snow Hill to Grand Central was under construction. The extension opened in May 2016.

“I am delighted that we have reached this milestone in the development of Metro in Birmingham city centre and are able to share this with the Minister of State.

“It is a clear sign to the people of the West Midlands that we are delivering and this is just the start of a revolution in public transport with huge investment in new rail, tram, rapid bus, services and cycling planned over the next few years.”

“We are trebling the size of the tram network in the next few years and this is to make sure we best link to HS2 and help us get the maximum economic benefits from the high speed rail line.

“These routes, particularly in the Black Country, will unlock new housing and employment sites and give more people access to jobs.”

“This Metro extension links communities from across Birmingham to the new key regeneration sites and job opportunities at Paradise and Arena Central.

“This extended public transport provision will also play a vital role in helping to cut traffic congestion which in turn will help reduce pollution in the city centre.”

Birmingham Westside extension – phase one to Centenary Square to open by end of 2019. Phase two to Edgbaston Five Ways and 54 Hagley Road set to open in 2021.

Wednesbury to Brierley Hill extension – 11km route serving Tipton, Dudley and Merry Hill due to be running by 2023.

Wolverhampton City Centre extension – trams will run along Pipers Row to the new interchange at the redeveloped Wolverhampton Railway Station. Due to open in 2020.