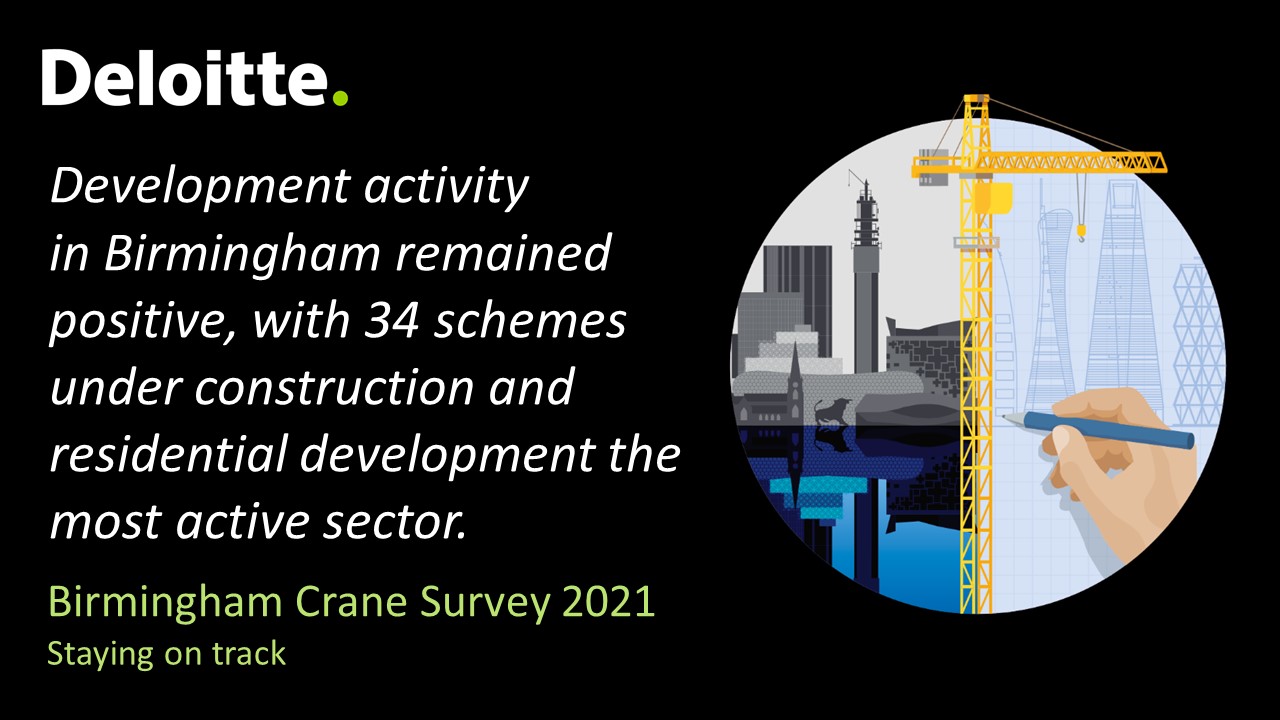 Construction in Birmingham has remained resilient in the past 12 months despite inevitable setbacks enforced by the current pandemic and tougher economic conditions.

The latest Birmingham Crane Survey shows activity across the city remains high with the number of new developments across the centre of the city decreasing by just one in 2020 from 11 to 10. However, the number of current schemes under construction has dropped by 17 per cent from 41 to 34.

Edwin Bray, partner at Deloitte Real Estate and author of the survey, said:

“2020 has seen a shift in development across the city, but it has remained resilient in a very challenging year. Both residential and purpose built student accommodation have performed well and although we have seen a significant drop in the amount of completed in office space, there is still over one million sq ft under construction.”

“Both domestic and foreign investors continue to see Birmingham as the UK city of choice as we look forward to hosting the Commonwealth Games in July next year.  Beyond that, the arrival of HS2 and the first brand new intercity terminus station built in Britain for over 100 years, means Birmingham is continuing to attract national and international interest.”

The 10 new starts recorded in this survey are split across six sectors, four in residential; two in office and one each for education, hotels, leisure and student accommodation – a more level playing field compared to 2019 when new starts were shared by residential (7) and office (4).

2020 has witnessed a new record in the history of the Birmingham Crane Survey with purpose-built student accommodation (PBSA) delivering 1,458 new student bed spaces in the past 12 months.
Over two-thirds of new beds available follow the completion of the 1,023-bed Lancaster Circus in Eastside. The remaining 435-beds are on Bath Row in Westside.

However, whilst there are two schemes currently under construction, there are questions around future growth rates and pressures in the sector due to Covid-19 interruptions. At present, the pipeline has reduced and is below the 10-year average of 741-beds.

In its 19th year, according to the Birmingham Crane Survey, residential development continues to see an uptick in activity as it sets new records following the completion of 2,072 units. This is well above the 10-year average of 607 and the highest total in the past decade.

However, this record is set to be broken in 2021 as delayed schemes come to fruition alongside those that are due to complete. The on-going pandemic has inevitably slowed construction, but with 20 schemes under construction and four new schemes breaking ground in 2020, it is the most active of all the sectors.

Although the pipeline remains strong, schemes currently under construction have dropped by 23 per cent from 26 to 20, with a further 27 per cent drop-in units being developed from 5,318 to 3,886. Brad says:

“Demand for sites suitable for the private rental sector continues to remain healthy, with sustained interest in sites for large, well-located schemes. New developments around Paradise Circus and Arena Central, coupled with the forthcoming 2022 Commonwealth Games as well as the tram improvements and HS2, continues to drive investor confidence.”

For the fifth consecutive year, office space surpasses 1 million sq ft under construction, but it is a tale of two halves for the sector.

Although space under construction remains high, just over 210,000 sq ft was completed in 2020 – similar to levels not seen since 2016 and well below the 10-year average.

It follows a landmark year for office completions in 2019 where over 775,000 sq ft of new and substantially refurbished office space was delivered.

“The decision by BT to take 283,000 sq ft to employ up to 4,000 people at Snow Hill last year was the latest in a long line of big wins for the city.  Developers are continuing to push forward with new schemes and Birmingham features high on the list when considering major office relocations in both the public and private sectors.

“Good progress has continued at 103 Colmore Row, with 223,631 sq ft of office space due for completion in 2021. 3 Arena Central is also expected to complete later this year.

“Whilst all sectors have had to deal with interruptions and consequent delays the future for offices has been the subject of much speculation.

“Our latest CFO survey showed that home-working is set to increase five-fold by 2025 and with this the anticipation that the role of the office will flex to meet shifting demands of employees and a potential need for collaborative and creative space.

“There is no doubt that many employees cannot wait to get back to the buzz of the city centre, but it’s less clear whether the return will see the levels pre-pandemic and whilst this may take pressure off public transport at peak times, the consequences could be far reaching.

“However, office flexibility could lead to more businesses taking space in the city. For the 7th year in a row, Birmingham topped the league for the number of new start-up businesses outside London with 18,394 new ventures setting up. This sustained performance underlines growing confidence in the city as entrepreneurs put down roots across an exciting range of new and emerging businesses.
“2020 may go down for many as a year to forget but despite all the challenges developers continued their work to help shape a better city.  As we start to emerge from the pandemic and look towards 2022, we should remain confident there’ll be more cranes on the horizon and trains on the track."

The Deloitte Real Estate Birmingham Crane Survey measures the volume of development taking place across the city centre and its impact. You can find the full survery here.