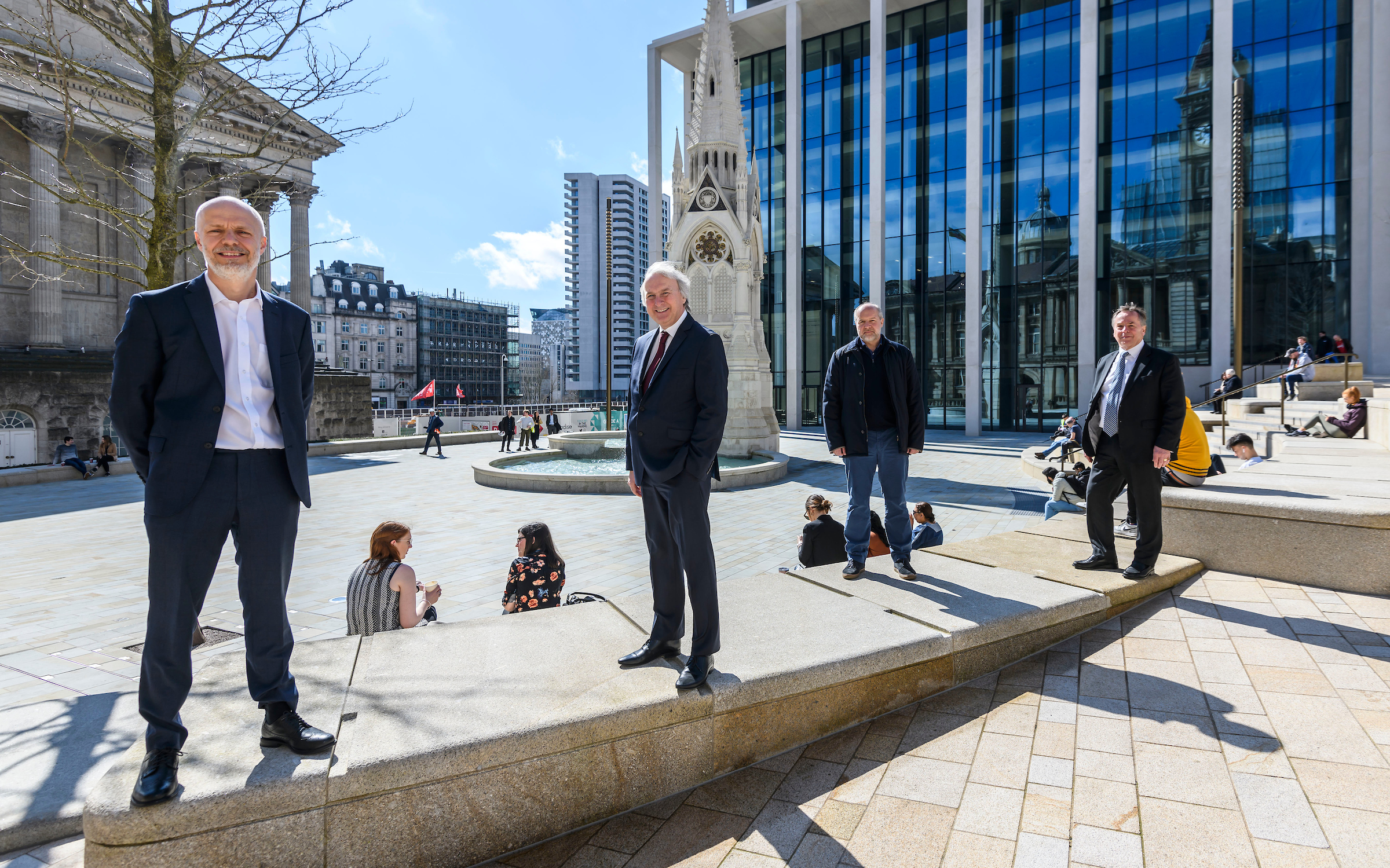 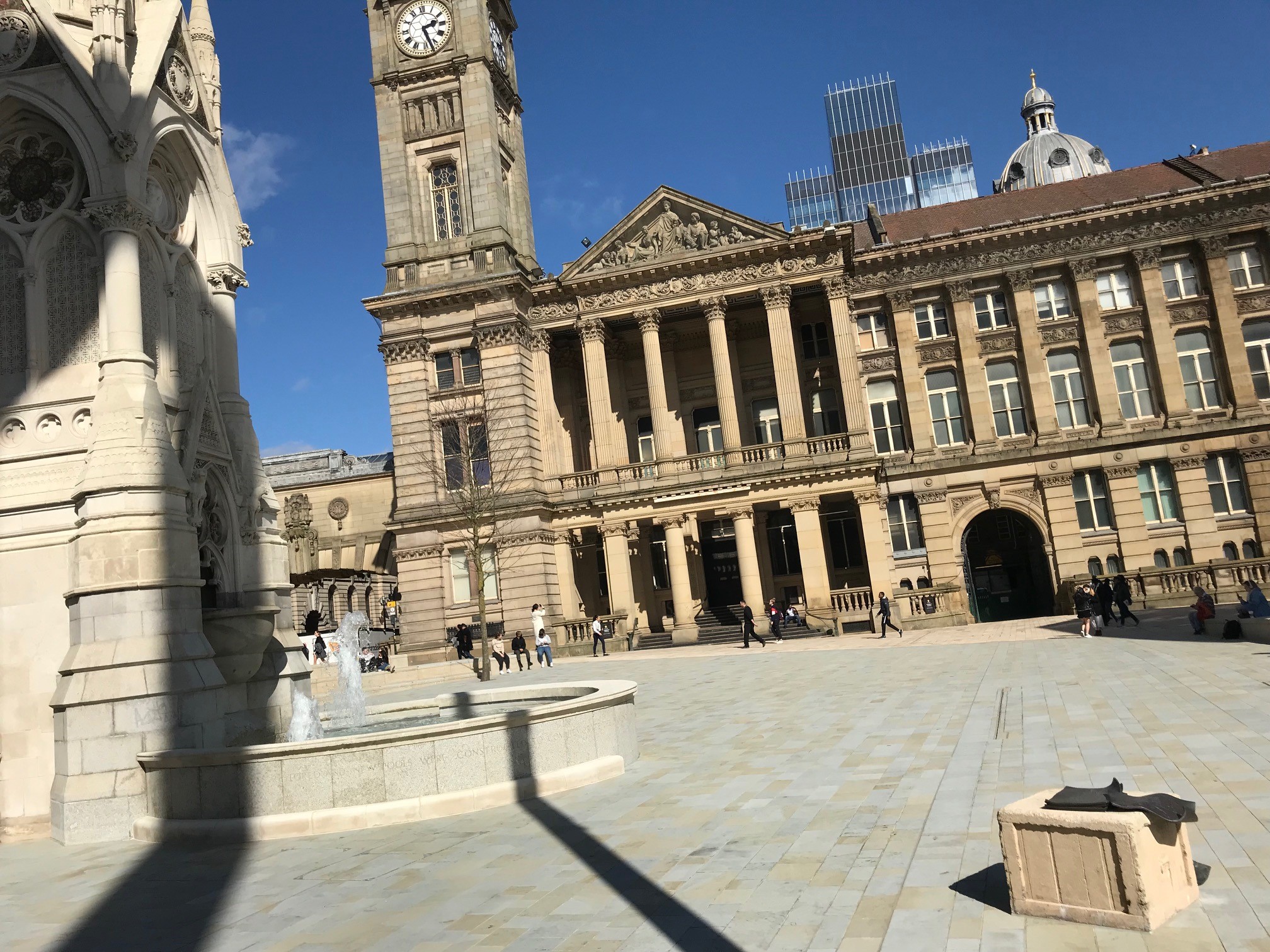 One of Birmingham’s most significant public spaces, Chamberlain Square, has re-opened to the public as the final part of the first phase of the £700m Paradise scheme at the heart of the city.

The square has been completely updated. Sioban Coppinger’s 1993 bronze statue of Thomas Attwood, Birmingham Man, has been fully restored and returned to his position sitting on the steps close to the Town Hall.

The centrepiece of the square remains the 140 year old Chamberlain Memorial which has been fully cleaned and renovated with the fountain and its jets replaced. It continues to provide a fitting tribute to Joseph Chamberlain himself as well as providing a backdrop to the stunning classical and Victorian architecture of the Town Hall, Council House and Museum & Art Gallery.

"The re-opening of Chamberlain Square is a key milestone not just for the Paradise development, but for the city of Birmingham. After five years of construction and a year of lockdowns, we are now seeing the fruits of all the effort that has gone into Paradise in the shape of new occupiers in our first two commercial buildings making major investments in the city as well as new pedestrian access points across the city and through the public realm.

"The significance of Chamberlain Square is important not just for us, but for the city and also for the country as a whole because this is a high profile project that was successfully delivered during 2020, despite all the challenges. During last year we welcomed PwC to their largest UK regional office at One Chamberlain Square, made occupier announcements with Knights and Mazars joining DLA Piper at Two Chamberlain Square, and welcomed leisure operators like Dishoom.

"We also submitted a planning application for Octagon, a 49 storey residential tower, and started construction of our next commercial building, One Centenary Way. Finally, we also announced the winners of the architectural competition for our next commercial building, Three Chamberlain Square. It was a very busy year and we know 2021 is already seeing more of the same kind of activity having already announced Rosa’s Thai will be opening this year."

"Our commitment to Paradise has brought about a major new development for the city and its people with genuine mixed use buildings already playing their role in boosting the local economy and providing jobs and opportunities for the people of the West Midlands."

"The re-opening of Chamberlain Square along with the Paradise development will play a vital role in economic recovery for the region.  GBSLEP’s investment of £139m into Paradise has meant that infrastructure which once blocked off the square has been removed to create more space for businesses to relocate and for our people to come and enjoy.

"I see this area as the civic heartbeat of the city centre, surrounded by Birmingham Museum and Art Gallery, the Town Hall and the Council House.  Now the new Paradise development will breathe even more energy into this already magnificent square which will be welcoming people from all over the world when we host the Commonwealth Games next year."

Chamberlain Square is one of the most historic corners of the city and has seen a lot of changes through the last hundred and eighty years from when it was first laid out at the junction between Edmund Street and Congreve Passage in the 1840s. In the intervening years the square has formed a backdrop to the Town Hall and the Council House as well as the former Mason College and the original Reference Library.

The new Chamberlain Square will, once more, be a natural meeting point in the very heart of the city. With its wide bleacher-style seating areas and natural amphitheatre shape, the square lends itself to being a centre for public events and performances. A programme of public events is currently being curated and Paradise looks forward to making further announcements on this later in the year.

At almost 2 million square feet, Paradise Birmingham is delivering up to ten new flagship buildings across a truly mixed use environment offering offices, shops, bars, cafes, restaurants, a high quality hotel and plans for a 49 storey residential tower, across 17 acres in the heart of the city.

The Paradise development is being brought forward through Paradise Circus Limited Partnership (PCLP), a private-public joint venture with Birmingham City Council. The private sector funding is being managed by Hermes Investment Management which has partnered with Canada Pension Plan Investment Board (CPPIB) on the first phase of the development. Argent is the development manager.

Paradise sits in the country’s largest city centre Enterprise Zone and has already benefited from investment by the Greater Birmingham and Solihull Local Enterprise Partnership (GBSLEP) in enabling and infrastructure works.

A website showcasing the vision for Paradise, in addition to a live time-lapse camera and all the latest news about the development, can be viewed at www.paradisebirmingham.co.uk