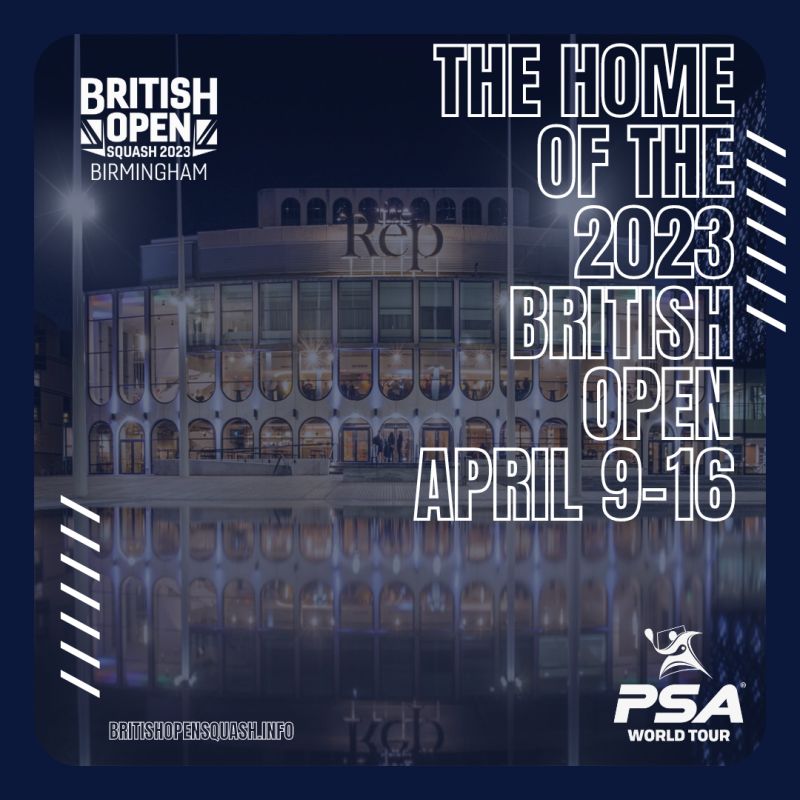 The British Open - one of the most prestigious and historic tournaments in professional squash - will be held in Birmingham for the first time in over two decades when the world’s best players line up at Birmingham Rep and Edgbaston Priory Club between April 9-16 2023.

The PSA World Tour Platinum tournament - which has been held in Hull since 2013 - will return to Birmingham for the first time since 2001 when the Utilita Arena Birmingham hosted ‘The Wimbledon of Squash’. The opening two days of the event will take place at Edgbaston Priory Club, before play moves over to the spectacular setting of The Rep in the heart of Birmingham city centre, where the action will take place on an all-glass show court from round three onwards.

England No.1s Mohamed ElShorbagy and Sarah-Jane Perry will compete for the titles alongside defending champions Paul Coll, of New Zealand, and Hania El Hammamy, of Egypt. A record prize fund of $370,000 will be on offer and will be split equally between the male and female athletes.

“We’re excited to move the British Open to Birmingham, a city which has a rich history within the sport. We started this conversation earlier this year with the West Midlands Growth Company, which aims to attract major events to Birmingham and the wider region, so we are delighted to be announcing this today.

“Not only has Birmingham hosted the British Open on five previous occasions - as well as the British Junior Open multiple times - the city also successfully hosted the Commonwealth Games last summer, with thousands of fans flocking to watch the squash. We want to continue this legacy with the latest instalment of the iconic British Open and look forward to working with Birmingham City Council, Edgbaston Priory Club and members of the Birmingham Major Sporting Event Leadership Group over the coming months to ensure we put on a show to remember.

"As we look forward to an exciting new era for the British Open, I'd like to take an opportunity to highlight the role that Dr Assem Allam played in staging the event from 2012 until the present day. Dr Allam sadly passed away recently and everyone at the PSA would like to express their gratitude for his unwavering support over the past decade."

“We’re delighted to welcome back the British Open to the city – its return is long overdue and adds an another exciting and fast-paced sport to the portfolio of major events we are developing.

“This partnership is further proof of the way in which our Proud Host City status for the Commonwealth Games has shown governing bodies and sporting federations of our ability to deliver well-organised, well-attended, events that are enjoyed by athletes, spectators and officials alike.

“It’s great that the Edgbaston Priory Club and The Rep will be showcased as venues for the Open and this is another opportunity for businesses in the city to boom during our golden decade of opportunity.”

“We’re thrilled to be part of bringing the British Open to the city and hosting matches on our main stage in a spectacular all-glass showcourt setting.  We look forward to welcoming thousands of spectators to The Rep over the ten day period and sharing our iconic theatre with them.

“Hosting this significant sporting event in partnership with our events company Unique Venues Birmingham and Birmingham City Council generates income that’s invested back into all the work that The Rep does as a registered charity – whether that’s theatre productions on our stages, outreach work in schools and communities or talent development with new artists.  We’re delighted to be playing our part in such a high profile event for the city.”

“Following the success of the Commonwealth Games in August, we’re delighted that the prestigious British Open will be coming back to the city of Birmingham. This is a fantastic opportunity to further raise the profile of squash and build on the work we have been doing to help people from communities across the city play squash since the Commonwealth Games. We hope the British Open will inspire people of all ages and from all communities to try squash.

“The Rep will provide a fantastic stage for the event, providing both an iconic city centre location and giving spectators an unparalleled viewing experience. We look forward to working alongside the PSA and Birmingham City Council to create a memorable showcase for the world’s finest players and to enhance the profile of the sport in the city."

“It’s fantastic that the Professional Squash Association has chosen the West Midlands for the 2023 British Open. Having successfully hosted squash in the city during the Birmingham 2022 Commonwealth Games, we’re looking forward to welcoming back competitors and spectators alike.

“The Games put the West Midlands in the global sporting spotlight, providing us with a platform to show sporting federations that our region should be at the top of their list when picking the destination for their next major event. Following positive conversations between the West Midlands Growth Company and the Professional Squash Association, confirmation that the British Open will be hosted here is further testament to our credentials as a major sporting events hub.”

Tickets for the 2023 British Open will go on sale on December 21. Squash fans can register their interest here.

Action from the event will be broadcast live on SQUASHTV and on the channels of PSA's broadcast partners.