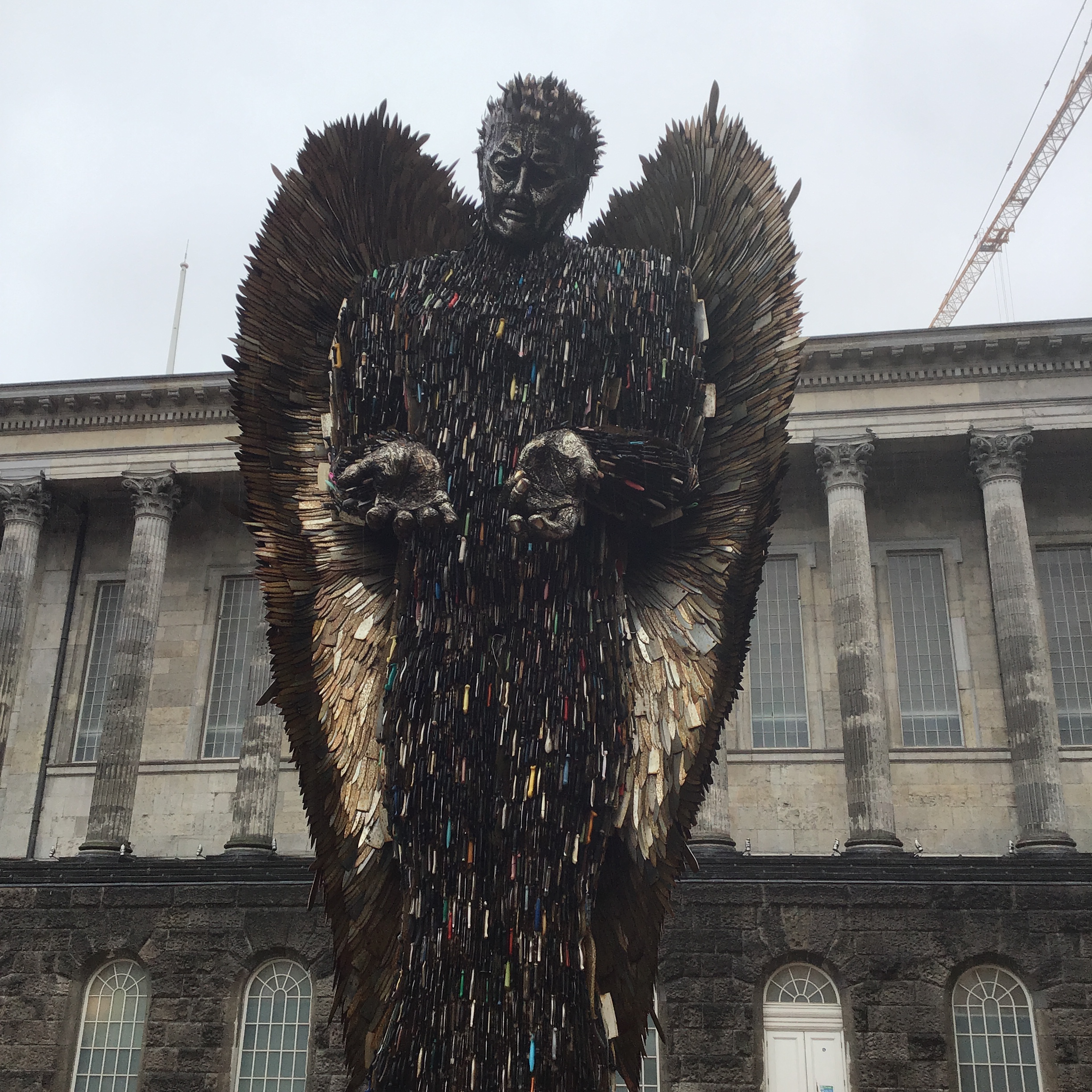 A huge 27-foot sculpture, made from 100,000 confiscated knives, was welcomed to Birmingham earlier today (8 May) as the city comes together to tackle knife crime.

Birmingham City Council, working with the West Midlands Police and Crime Commissioner, has brought the Knife Angel to Victoria Square, where it will stand for four weeks as a physical reminder of the effects of violence and aggression.

The iconic sculpture - commissioned by the British Ironwork Centre in Oswestry, Shropshire and created by artist Alfie Bradley – will be on display in the city centre until 5 June 2019.

The statue – which has previously visited Coventry, Hull and Liverpool – arrived in Birmingham after the latest Government figures revealed knife crime in the West Midlands rose by 17 per cent year-on-year between 2017 and 2018.

Birmingham City Council is working with partners to deliver a programme of activity – which includes school visits, working with community groups and Youth Service activities – to ensure the Knife Angel’s message has a lasting impact.

"Ten Birmingham lives – five of them teenagers - have been brutally lost as a result of knife crime in the last 12 months. That's ten families left devastated by the loss of a loved one and ten communities left mourning and in fear.

"The tragic truth is that if we don't address this national crisis, people will continue to die and I hope that as we host the Knife Angel over the next four weeks, we can step up our collective efforts here in Birmingham.

"We all have a part to play in tackling knife crime: Government, councils, the police, communities, schools and individuals. Together we have to understand what is driving this crisis and we must understand and address why young people are choosing to carry knives."

“Knife crime is a national emergency. In the West Midlands, knife crime has more than doubled since 2012. The tragic loss of life from knife crime has been felt in Birmingham in particular.

“The Knife Angel is a reminder of the devastating impact of knife crime has of families and communities.

“To tackle violent crime we all need to work together. This is not an issue that the police can simply arrest their way out of. It requires preventative work to divert young people away from crime, but also requires us to invest in opportunities to help all young people fulfil their potential.

“Wherever the knife angel has visited, it has been a calling point for action. It has brought people together and renewed people’s commitment to improving things for young people. I hope the knife angel visiting Birmingham will have a similar impact.”

After the Home Office granted the British Ironwork Centre permission to collect weapons from knife bins across the country, it took four years to build the Knife Angel as a response to rising reports of knife crime, and lives being lost to knives.

“Liverpool, Hull, Coventry and now Birmingham have welcomed the Knife Angel to their cities. I really hope that other towns and cities will take up the mantle to tackle this national blight.”

Further details of where people affected by knife crime can go for help and support and more information about the sculpture itself can be found here. The Knife Angel can be seen in Victoria Square until 5 June 2019.