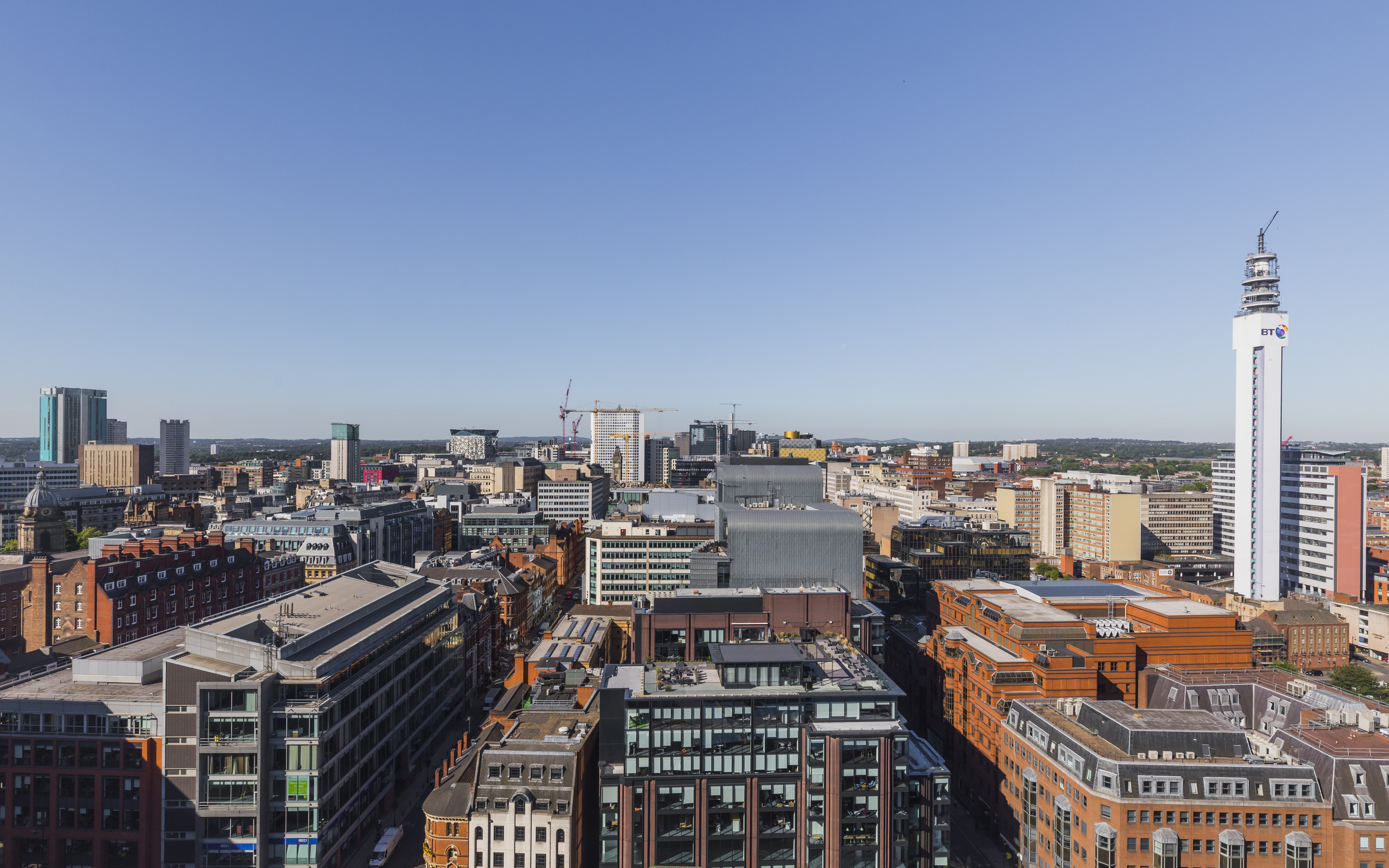 Birmingham, the UK’s second largest city, is leveraging its central location, strong skills base and improving transport links to appeal to companies seeking a smart and cheap alternative to London.

Birmingham is undergoing its greatest renaissance since the Victorian era, according to local officials and business leaders. With a population of 1.13 million people, the city already has the second biggest economy in the UK after London, at £26.2bn ($33.8bn) in terms of gross value added. It is attracting a whole host of new businesses, especially in professional services and in the digital economy.

In 2017, the Midlands region – which includes Birmingham – recorded its highest number of FDI projects of any year in the past decade, according to EY’s 2018 UK Attractiveness Survey. Some 140 projects were announced last year, creating 10,600 jobs.

A golden decade
Business and professional financial services is one of the most important sectors in Birmingham’s economy; some 105,000 people are employed in the industry in the city and almost 165,000 in the Greater Birmingham and Solihull Local Enterprise Partnership (LEP) area.

Meanwhile, Birmingham’s tech and digital sector is already the largest outside London, employing more than 16,500 people in the city and 35,600 in the Greater Birmingham and Solihull LEP. It is expected to be one of the region’s biggest growth industries over the next decade.

“The city is experiencing a massive renaissance at the moment,”

“It amounts to a ‘coalition of the willing’ among business leaders, local politicians and top academics. Everyone is focused on delivery. There is a common purpose to make this a wonderful place in which to live and work.”

“The city is witnessing an unprecedented period of growth. You only have to look at the number of cranes in the city centre. Investors have a lot of confidence in the city at the moment. This will be Birmingham’s ‘golden decade’. The Commonwealth Games will take place here in 2022 and the first phase of [rail line] HS2 is expected to be completed by 2026.

“Birmingham is a super-diverse city where more than 140 languages are spoken. It is also one of the youngest cities in Europe; 40% of the population is under the age of 25. HSBC’s decision to base its new UK retail and commercial banking head office in Birmingham is a major vote of confidence to the city’s financial services sector.”

On the money
HSBC’s 10-storey, 19,500-square-metre building at One Centenary Square in the heart of Birmingham city centre will accommodate up to 2500 UK staff. Local experts now believe many other banks and financial services companies based in London will follow suit and open offices in Birmingham.

Deutsche Bank became the first major bank to open a nearshore centre in the city in 2007. Located at Brindley Place in central Birmingham, it is now the bank’s second biggest office in the UK and provides 1500 middle-and back-office jobs.

“A lot of important functions take place in the Birmingham office, including know your customer, compliance, legal and human resources,”

“We serve a global client base from this office. Birmingham has two main advantages. First, it is possible to get someone with the right skills set but at a lower salary point; and, second, it caters to a generation of young people who do not necessarily want to live in London.

“It is easy to find talent in Birmingham; there are a dozen or so universities located in the surrounding region. The universities are also responding to the specialist technical needs of the local financial services sector. Aston University is developing a cybersecurity degree course, for example. That kind of innovation is very useful to employers in the financial services industry.”

At the end of 2017, PwC announced that it would occupy the whole of the first building of the Paradise development in central Birmingham (measuring about 14,000 square metres). This will involve the relocation of 1400 PwC staff already employed in the city and potentially create 1000 additional jobs in the professional services area.

Paradise regained
The Paradise project is a £700m, 170,000-square-metre scheme to redevelop about seven hectares in central Birmingham. It includes eight office buildings, a new hotel and a public space, and involves redrawing traffic routes around the old Paradise Circus island. The first phase of 16,000 square metres at One Chamberlain Square is expected to be completed by the end of 2019.

Rob Groves, regional director at Argent, one of the UK property developers behind the Paradise scheme, says:

“This is the first time during the post-Second World War period that Birmingham has started to realise its full potential. Business confidence is high at the moment and there is a great deal of enthusiasm about all the changes taking place.

“I think the city’s transformation started with the redevelopment of New Street train station in 2015 but the momentum has picked up now. It is not just new office buildings going up but new residential spaces are being created in the city centre, too. There is now a strong cultural offering with new restaurants opening all the time.”

Birmingham is home to the largest number of tech start-up accelerator and incubator hubs in the UK outside London. More than 25% of the UK’s games workforce is also based in the Greater Birmingham area. Silicon Canal, the Innovation Birmingham Campus, the Custard Factory and Steamhouse are all innovative spaces, helping to create unique talent.

More than 17,400 new businesses were registered in Birmingham in 2016, a higher number than any other UK city outside of London.

Fintech hub
EML Payments, a payment services provider listed on the Australian Stock Exchange, is yet another impressive name to have opened its European head office in Birmingham.

Stuart Green, its chief executive officer for the UK and Europe, says:

“This is a fantastic, up-and-coming city,”

“It is great that HSBC is opening its UK retail banking head office here. That will encourage many companies in the fintech space in particular to come here. It is much cheaper to locate here than in London, and also Birmingham has a great location in the centre of the country. The city is now becoming a really important hub for fintech.”

Pervacio, a US mobile device solutions specialist, opened a new technology hub in the city in May 2018. The firm works with the world’s largest device manufacturers and mobile carriers. Birmingham gives Pervacio the opportunity to participate in and support programmes around key emerging technologies, while the company’s international customers enjoy good road, rail and air transport links.

“The talent pool in the West Midlands area is vast,”

“There are about 140,000 new graduates from all the region’s universities every year. The area has a very young population and this gives it a competitive edge. The mobile devices sector is just going to grow and grow; a cluster of firms specialising in the digital economy is now emerging in the city. This really helps us to generate new ideas.”

Deloitte’s annual Crane survey of new property developments in Birmingham highlights just how much new office space is being constructed. In both 2016 and 2017, it registered about 130,000 square metres of new offices being built and in 2015 it noted about 93,000 square metres.

Nearshoring centre
As well as Paradise, the other big project in the centre of Birmingham is Arena Central. HM Revenue & Customs has agreed to rent a 22,000-square-metre, 14-storey building that is part of the scheme (HSBC’s new building is also part of the overall project). This will accommodate 3500 civil servants and is slated for handover in early 2020.

“The nearshoring concept has become very important to Birmingham,”

“A move to the city can offer banks and other financial services companies savings of up to 50% on the cost of a building. We are seeing investors from all over the world, including from China, the rest of the Far East and the Middle East.

The Snow Hill masterplan outlines another major project in the Snow Hill and Colmore areas of the city centre, planning to create the city’s equivalent of Canary Wharf. The £600m scheme includes 204,000 square metres of new office floor space, 4000 new residential units, and the creation of 10,000 new jobs over a 20-year period. The Snow Hill area is already a major hub for the business, professional and financial services sector and is home to more than 500 companies. It includes an extension of the £127m West Midlands Metro, a light-rail tram line.

HS2’s welcome arrival
The HS2 rail line is the largest infrastructure project in Europe and has the potential to transform the Birmingham and Solihull areas. It will place the West Midlands at the heart of the UK’s transport network with two new stations at Curzon Street in the city centre and the Interchange in Solihull, a large town 12 kilometres south-east of Birmingham’s city centre. The first phase of the project connecting London and Birmingham is expected to be completed by 2026, and the second, connecting the West Midlands and Manchester and Leeds, by 2033. The scheme’s overall cost is £55.7bn.

Journey times between Birmingham and London are forecast to be cut from an average of one hour 21 minutes to just 49 minutes, while journey times between Birmingham and Manchester will be cut from one hour and 28 minutes to 41 minutes. Meanwhile, the new National College for High Speed Rail, which opened its doors in central Birmingham in September 2017, is now training the next generation of engineers that HS2 will require. The new £40m institution will accommodate 1300 students a year once it is at full capacity.

Together the plans for wider development around the Curzon Street and the Interchange stations will create more than 71,000 jobs, about 1.3 million square metres of new employment space, more than 7000 new homes and an economic uplift greater than £3bn.

“Solihull already has a great deal of vitality,”

Foreign interest
US engineering giant Bechtel opened an office in Birmingham city centre in December 2017, so that it could be closer to major clients, including HS2 and Highways England (which also has its head office in the city).

“The city is one of the fastest growing in the UK, currently. There are just so many different infrastructure projects under way in the area and this creates great opportunities for a company like us.”

Benny Kong Intellectual Property, a law firm headquartered in Hong Kong, opened an office in Birmingham in July 2018 and is a good example of the kind of professional business services company the city is now attracting.

“Many Asian companies want a trademark registered in the UK and vice versa,”

“That is the service we provide. We chose Birmingham for our first European office partly because it is much cheaper to hire skilled talent here than in London.”

In 2017, the average salary of workers in the city stood at £28,815, while the unemployment rate dropped to 7.9%. Birmingham is experiencing a huge economic revitalisation and expects to attract many new businesses, especially in the business, and professional services and digital economy sectors, in the future as projects such as HS2 keep the city on track to meet investors’ expectations.