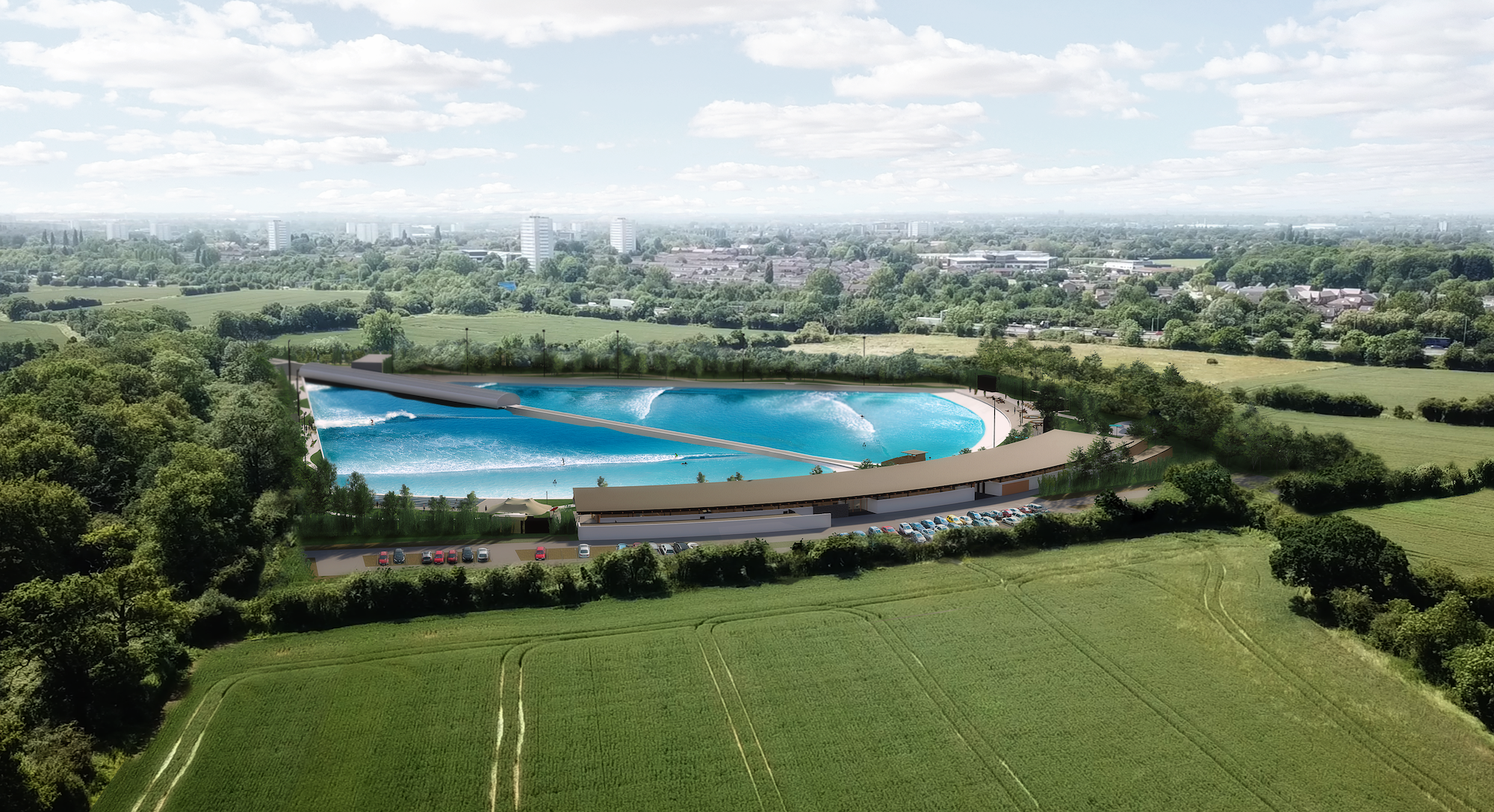 Birmingham is set to become home to the UK’s most landlocked wave park after plans for a new £25 million facility were revealed on 30th August.

The planning application lodged by Emerge Surf is for a 15-acre site, approximately seven miles to the east of Birmingham’s city centre at Coleshill. Features include a 5.4-acre surf lagoon, powered by Wavegarden’s Cove technology, an outdoor heated swimming pool, a perimeter track for Onewheel self-balancing electric skateboards and a 1,600 sq metre hub building.

The park will be named Emerge Surf Birmingham and will also be home to a surf school, surf shop, café and restaurant, multi-purpose fitness studio, physio and massage room and children’s play area.

With the closest surfable ocean waves more than 100 miles away, this new facility will be a haven for landlocked surfers and those keen to try the sport for the first time.

Situated in North Warwickshire, described by the Chief Executive of North Warwickshire Borough Council, Steve Maxey, as “one of the most dynamic economies in the country,” the wave park will be easily accessible from the M6 and M42 motorways with more than 7.6 million people within a one hour drive of the venue and 27 million within two hours. It is also close to Birmingham Airport, Birmingham International Railway Station and the future HS2 Interchange Station, making it an extremely exciting destination for local, national and international visitors.

Emerge Surf Birmingham is expected to create 100 full-time equivalent jobs, attract around 250,000 visitors a year and deliver an annual economic boost of between £18 million-£21 million to the region.

“It’s an incredibly exciting time in the development of surfing. The mental and physical benefits of the sport are increasingly understood and the 2020 Tokyo Olympics will hugely increase levels of interest and participation. In parallel, the significant strides made in wave pool technologies have the potential to make the sport accessible to all.

“Our vision is to not only provide a world class surfing experience for surfers of all levels, but also a wide range of complementary activities. We are proud to be developing the UK’s most landlocked wave park with the support of our partners, Wavegarden, Surfing England, Surf Life Saving Great Britain, The Wave Project, Future Motion Inc and Seaholm.

“We’re confident that bringing a little slice of the ocean to Birmingham will deliver a positive social impact and boost mental and physical wellbeing. In addition, we’re very keen to work with local schools not only to teach children to surf, but also to offer swimming lessons and instruction in water safety.”

Emerge Surf Birmingham will work in partnership with national governing body Surfing England to deliver certificated surfing tuition and with registered charity Surf Life Saving Great Britain on a wide range of courses for water safety. It is also partnering with The Wave Project to deliver therapy through surfing to local children suffering with a range of mental health issues.

“There has never been a more exciting time to be involved in surfing. We are in the midst of an artificial wave revolution which will bring our sport and our passion to a whole new audience. Emerge Surf Birmingham is absolutely part of the revolution and we are stoked to be supporting them as their plans develop to bring a world class facility to the Midlands.”

“We are extremely excited about Emerge Surf’s plans for Birmingham. As a landlocked city with one of the largest market catchments in the UK, there is a great opportunity to introduce the thrill of surfing perfect waves to a whole new generation of surf enthusiasts.”