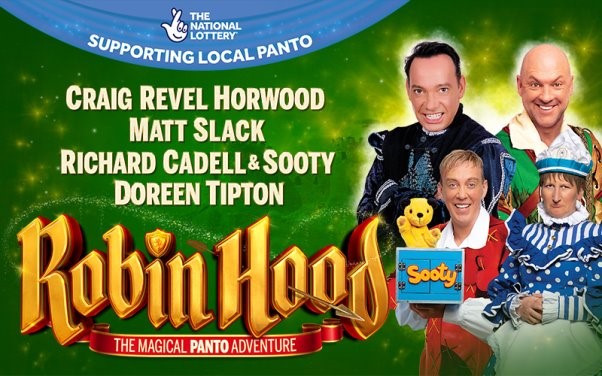 Birmingham Hippodrome and Qdos Entertainment, producers of the city’s annual festive production, have today announced that pantomime will be going ahead with an all-new production of Robin Hood staged, for the first time in 20 years, at the nearby Alexandra.

The production is able to go ahead thanks to the support of The National Lottery, which will give thousands of theatregoers, in Birmingham and across the country, the chance to enjoy socially distanced pantomime this Christmas. The show is being staged as a result of an initiative between The National Lottery and Qdos Entertainment which is providing financial support for theatres to stage socially distanced, live pantomimes this festive season. This will make it viable for venues to open their doors to the general public, generating vital income for the theatres and helping to restore jobs while providing much-needed cheer for pantomime lovers.

Fresh from the ballroom, Craig Revel Horwood will star as the villainous Sheriff of Nottingham and show Birmingham his real mettle as he tries to outwit Robin Hood and win the hand of the beautiful Maid Marion. Craig is a well-known face on television in the UK and now all over the world, as a judge on all 18 series of BBC1’s Strictly Come Dancing.

He will be joined by hilarious Hippodrome funny man, Matt Slack as Robin Hood. Matt has entertained and delighted audiences at the Hippodrome pantomime for the last seven years in roles which have won him, amongst others, the Best Comic accolade at the Great British Pantomime Awards.

Craig and Matt will be joined by television icons Richard Cadell as Will Scarlet, with his mischievous sidekick, Sooty, and, as Mrs Tuck is Doreen Tipton, back for her second consecutive Hippodrome pantomime, following her star turn in Snow White and the Seven Dwarfs last year.

Artistic Director and Chief Executive of Birmingham Hippodrome, Fiona Allan and Managing Director of Qdos Entertainment Michael Harrison, who has directed the Hippodrome pantomime for the past 10 years, said:

“We’re delighted to be working together to make sure that our loyal audiences in Birmingham don’t miss out on the magic of pantomime this year. Presenting Robin Hood at The Alexandra allows us to see two of the city’s key cultural institutions open with social distancing in place. Although on a different stage, this year’s show will be designed and created by the usual Hippodrome panto creative team, and will feature all the comedy and laughter our audiences have come to expect”.

This new production will be packed full of comedy routines, audience-safe participation and all the unmissable magic that Hippodrome audiences know and love from their annual festive pantomime in their temporary theatrical home at The Alexandra for this year only.

“Words can’t quite express how thrilled we are to be working with Qdos Entertainment and our friends at Birmingham Hippodrome to bring this much loved annual tradition back to the city this festive season! This cross-venue collaboration is one of many examples of cultural organisations in Birmingham working together to provide audiences with entertainment during what has been a challenging time for the sector. We are incredibly grateful to the National Lottery for their support, without which we would not have been able to proceed. The opportunity to bring our team back to the venue to prepare for this special socially-distanced experience is the Christmas present we have all been dreaming of!”

The previously advertised production of Goldilocks and the Three Bears starring Jason Donovan and Matt Slack will be staged back at the Hippodrome in December 2021 and existing bookers have already been contacted with details of their new tickets.

The support of The National Lottery will ensure that socially distanced panto can take place this year in Birmingham, and other theatres across the UK. Up to 20,000 free tickets to pantomimes across the country, will be made available to National Lottery players to thank them for making it possible for this Christmas tradition to go ahead. National Lottery players raise on average £30M each week for Good Causes.  This year has seen up to £600M in National Lottery funding being used by charities and organisations affected by the impact of the coronavirus outbreak across the arts, community and charity, heritage, education, environment and sport sectors.

*Calls cost up to 7p per minute, plus your phone company’s access charge.