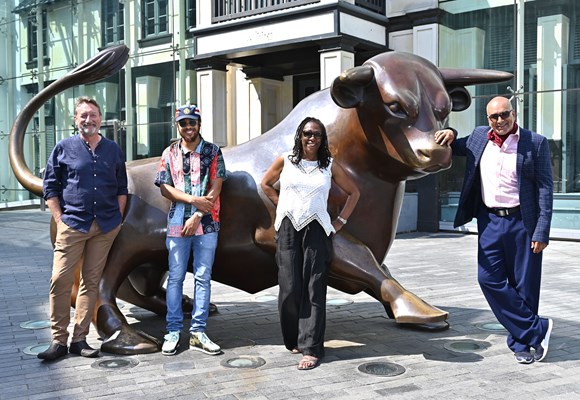 A stellar, six-person team has been formed and consists of a globally renowned theatre director, a two-time BAFTA award winner, an international rapper, a published novelist, an international set designer, and the creator and writer of the Peaky Blinders.

The creative team that will deliver the Opening and Closing Ceremonies of the Birmingham 2022 Commonwealth Games has been unveiled.

Taking place on 28th July 2022, and broadcast to 1.5 billion people around the Commonwealth, the Opening Ceremony will host a live audience of 30,000 at the newly redeveloped Alexander Stadium. Some of the UK’s brightest and best creative names have been assembled to deliver this once in a lifetime showcase for the region, with the team boasting a compelling blend of global prestige and homegrown talent.

The Birmingham 2022 Opening and Closing Ceremonies team consists of:

A globally renowned, Birmingham born, Theatre Director. Most known for modern retellings of the classics and has worked in the UK and abroad on the world’s most high-profile stages.

A published novelist and short story writer from Birmingham, Maeve’s credits include Whispers in the Walls, an anthology of new Black and Asian voices from Birmingham.

International rapper and music maker, Joshua has used music to unite and entertain audiences across the world. In 2018 he co-created a project offering music education and recording facilities to youths and underprivileged groups in Birmingham.

Hamish has directed and executive-produced countless ceremonies, award shows, concerts, and unique special events across the world. He is a twice BAFTA Award winner, plus Grammy and Emmy nominated global authority on live event broadcast.

Creator and writer of Birmingham’s most famous export, Peaky Blinders. Steven has also written screenplays for the films Closed Circuit, Dirty Pretty Things, and Eastern Promises, and has directed and written the films Locke, and Hummingbird (also known as Redemption.

The team have been bought together by Birmingham2022’s Chief Creative Officer Martin Green CBE, who also led the Olympic and Paralympic Ceremonies in London 2012. He said:

“As a showcase of creativity and innovation, a successful Opening Ceremony will be remembered by athletes, spectators, and broadcast audiences alike for many years to come. It is a defining moment for Birmingham, the West Midlands, and the UK as we welcome the Commonwealth and set the stage for the Games ahead.

"As we create these Ceremonies, it is our intention to utilise the new range of tools at our disposal. From CGI to special effects, the UK is a world leader in cutting-edge broadcast technology. The core creative team assembled to imagine the Opening Ceremony is drawn from a diverse range of disciplines, from theatre to literature, TV to stage production; we have had access to the very best UK and West Midlands talent to create this.

This talent and these tools are nothing without a story, and this city and region are full of rich and diverse narratives to share with the world. Ten years, almost to the day, since London 2012’s Opening Ceremony, these Games in Birmingham present a unique opportunity to create a global advert at a moment of renewal as we emerge from the challenges of the pandemic.”

Full details of the story of the Opening and Closing Ceremonies will be revealed in the coming months, as well as the musical performers, special guests and moments that will make up the shows. Created in Birmingham, the Ceremonies are set to be a platform for the voices, cultures and talent of the West Midlands to be represented on an international stage through the lens of innovative broadcast, cutting-edge technology, and spectacular creative production.

“The opening ceremony of Birmingham 2022 will be one of the highlights of an extraordinary year of major events here in the UK. British creativity will once again take centre stage - showing the world our incredible talent of leading directors, writers and set designers, and the dedication of the 1,200 volunteers taking part.

“After such a difficult time for us all, this will be a wonderful chance for us to come together and celebrate the very best of Birmingham, the West Midlands and the whole of the UK.”

“The Commonwealth Games Opening and Closing Ceremonies provide a unique platform for a city and country to showcase itself to a global audience. Birmingham 2022 has assembled a truly exceptional and diverse creative team that boasts genuine, world class talent and I have no doubt that they will work tirelessly to create unforgettable Ceremonies. These will live long in the memory and showcase the very best of Birmingham, the West Midlands, the country and the Commonwealth.”

“In under a year the eyes of the world will be on Birmingham and the West Midlands, and we know the opening and closing ceremonies will be key to a successful hosting of the Commonwealth Games.

“That’s why I’m delighted this first-class team has been assembled, and I know they will help create two magnificent spectacles that showcase the very best of our region.”

“The council-led redevelopment of the Alexander Stadium is progressing at pace and you can already see what a spectacular setting it will provide for the Birmingham 2022 Ceremonies. The creative team that has been announced for the events brings a wealth of local and international talent and experience to the table – and I know they will showcase Birmingham and the wider region to a global audience in a momentous way.”

Find out more at www.birmingham2022.com