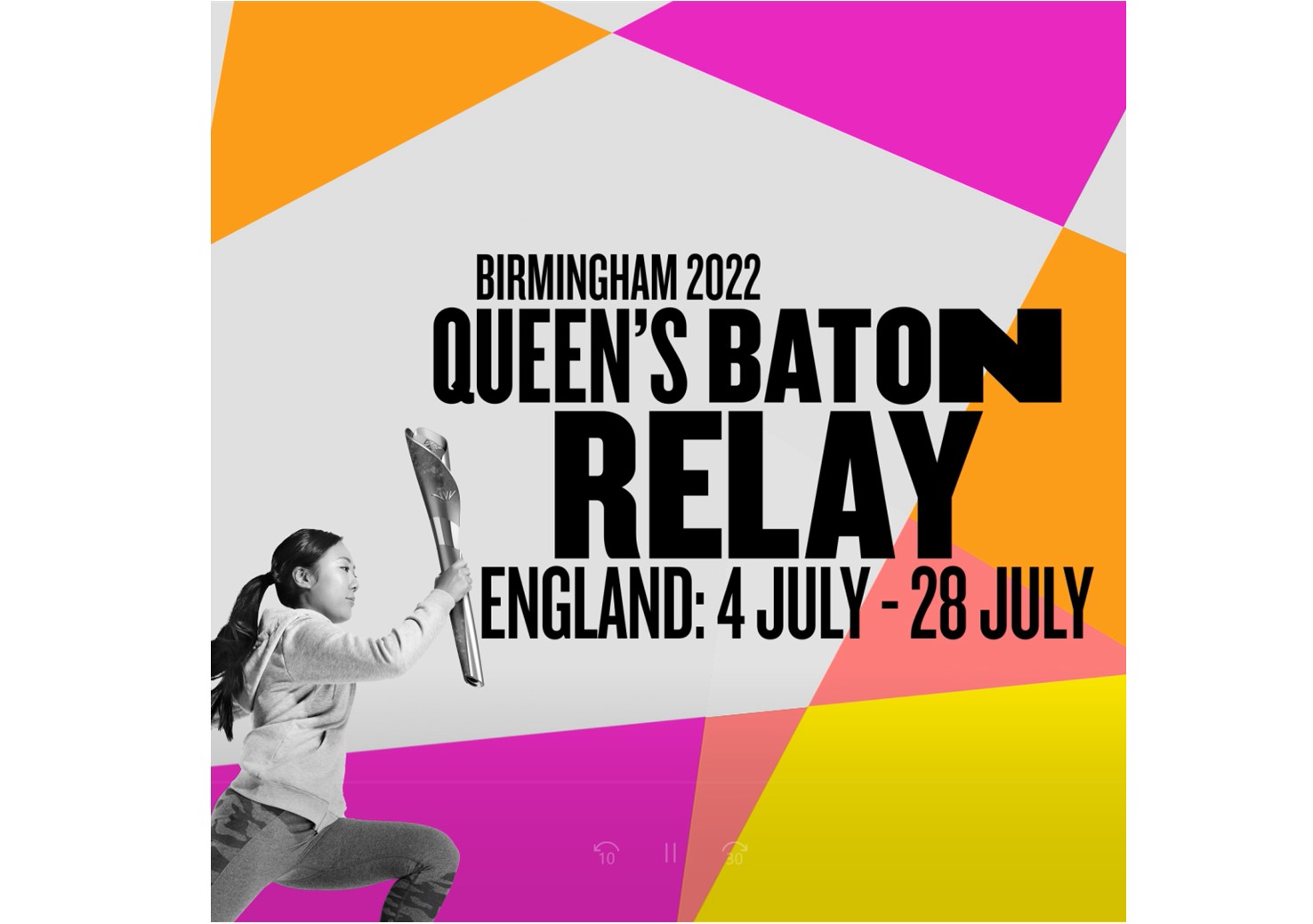 Birmingham 2022 announces much-anticipated route for the 16th edition of Queen’s Baton Relay, ahead of this summer’s Commonwealth Games

The Birmingham 2022 Commonwealth Games has unveiled the highly-anticipated route that the Queen’s Baton Relay will take in the West Midlands and the rest of the host nation this summer.
Travelling via land, air and sea, more than 180 communities in England will experience the Queen’s Baton on a route spanning 2,500 miles (4,000 kilometres). From energetic cities and historic market towns, to rolling countryside and rugged coastline, the Baton will head as far south as Cornwall and as far north as Northumberland.

The final countdown to the Opening Ceremony will see the Baton spend 11 days travelling through the host region of the West Midlands, visiting:

The West Midlands route is jam-packed with highlights of activity. To name a few, it begins with a visit to the Kidsgrove Pump Track in Newcastle-under-Lyme on 18 July, travels by coracle on the River Severn on 19 July, will wakeboard at Chasewater on 20 July, and will visit the Black Country Museum on 24 July. As the Baton nears closer to the host city, the Baton will be abseiled from Galton Bridge on 25 July and board a barge on the Grand Union Canal on 26 July.

Kicking off on Thursday 2 June, the Baton will spend four days in London, coinciding with the Queen’s Platinum Jubilee Weekend, celebrating The Queen’s 70th year as Monarch and Head of the Commonwealth.

The Baton will then resume the international journey, visiting the Falkland Islands, Jersey, Guernsey, and the Isle of Man, before touring home nations of Scotland, Northern Ireland and Wales.

It returns to England on Monday 4 July to commence a 25-day tour of the regions.

From sports days with local schools, to community festivals, people will be able to experience the Baton in many ways. Members of the public are encouraged to get involved with the celebrations and embrace the arrival of the Baton, taking the opportunity to experience the buzz of Birmingham 2022 in their community. The Birmingham 2022 website will provide information on the events and where to line the route.

Thousands of Batonbearers, each with inspiring backgrounds and stories, will have the honour of carrying the Baton during the journey through England, including those nominated in recognition of their contributions to their local community, whether that be in sport, education, the arts, culture or charity. Between 40 and 130 Batonbearers will carry the Baton each day, and the Relay will reach hundreds of villages, towns and cities during its tour of the country.

“Whilst the Baton has been travelling across the Commonwealth, we have worked closely with Local Authorities in England to devise a route that engages with hundreds of communities, passing sport venues, historic sites, local schools and Areas of Outstanding Natural Beauty. Yet the Queen’s Baton Relay is far more than just a journey. It symbolises connecting people from every corner of the Commonwealth, celebrates Batonbearers who take on challenges, and marks the countdown to the biggest sporting event in West Midlands history. And by the time the Baton returns to England for the final leg, 71 nations and territories will have already experienced the magic that comes with it.

“We hope that communities across the country join the excitement, attend events near them, line the streets to cheer on our incredible Batonbearers and celebrate the Birmingham 2022 Commonwealth Games.”

“The Queen’s Baton Relay symbolises hope, solidarity and collaboration across the Commonwealth at a time when it is needed most. It continues to inspire people wherever it goes and creates huge excitement for Birmingham 2022 as it journeys towards the Commonwealth Games Opening Ceremony on July 28.”

"The 2022 Queen's Baton Relay is coming home. Travelling the length and breadth of England, the Baton will bring the excitement of the Birmingham Commonwealth Games to every region of the country.

“The Relay marks the final countdown to the biggest sporting event to be held in the UK since London 2012, and I hope people come together and line their streets to celebrate this historic moment.”

“I’m pleased to hear that the Queen’s Baton Relay route across England has now been revealed as it makes its way towards Birmingham on an epic 72-nation and territory journey across the Commonwealth.

“The final leg of the Queen’s Baton Relay enables communities the length and breadth of England to experience the excitement around Birmingham 2022 before the Baton lands in Birmingham to take centre stage at the Commonwealth Games Opening Ceremony on July 28th.”

“What’s also very special is the role played by thousands of Batonbearers - each with inspiring backgrounds – who will carry the Baton on its journey through England after being put forward as a result of their contribution to their local communities. I congratulate all of them and look forward to seeing them in action along the route.”

“The arrival of the Baton back into Birmingham this summer will be a special moment and an occasion to celebrate the city’s vibrancy, creativity, diversity and boldness.

“The two-day route through Birmingham will showcase everything that is fantastic and unique in our communities, and we look forward to announcing the full details in the near future.

“It promises to be a fitting homecoming of The Queen’s Baton with hundreds of inspiring Birmingham Batonbearers carrying the Baton through the streets of the Proud Host City ahead of the Opening Ceremony.”

Throughout May, the Queen’s Baton Relay continues its journey through the Caribbean and the Americas, with visits to St Kitts & Nevis, Antigua & Barbuda, Bermuda and Canada, amongst others.

For more information on the Queen’s Baton Relay, visit www.birmingham2022.com/qbr

The information provided on the route through England is subject to local authority approval and therefore could be subject to change.